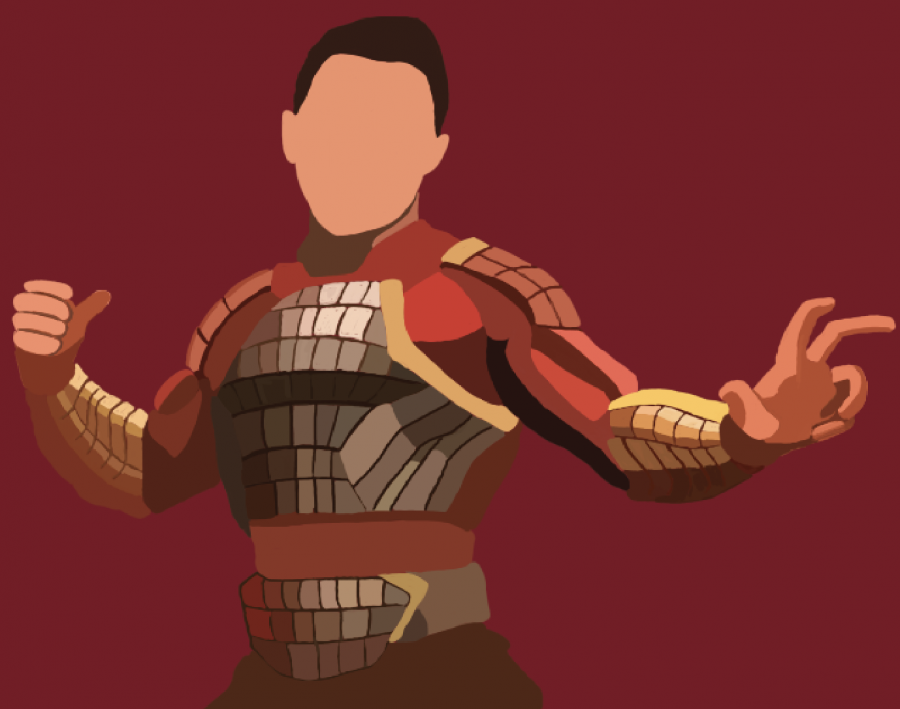 Shang Chi, played by Simu Liu, in “Shang Chi and the Legend of the Ten Rings”

As a child, junior Nabeeha Ahsan’s first experiences with racial representation in media were through her favorite kids’ shows, like “Phineas and Ferb” and “Jessie.” However, the tendency for these shows to play off of stereotypes for non-white characters caused Ahsan to struggle with racial biases for a significant part of her childhood.

“I started thinking that the stereotypical white boy was the most attractive on the planet,” Ahsan said. “I would say I didn’t notice it at first — I think that the way I saw it, unfortunately, was that the Indian guys are really nerdy. [These stereotypes were] really internalized, and even when I did realize it, I did still recognize that there was some truth to it, in that’s how other people saw Asians.”

It wasn’t until Ahsan began to expose herself to Bollywood movies in middle school that her view of South Asian culture began to change, largely due to the lack of holistic character representation that Asian Americans and Pacific Islanders (AAPI) characters were given in the other media that she consumed. Because of this, Ahsan is very excited that Marvel Studios’ latest projects are featuring more AAPI superheroes.

“I can tell that this is a great turning point for a lot of kids that are going to grow up seeing these characters,” Ahsan said. “We saw it with ‘Black Panther,’ how many Black kids [were] exposed to Black Panther being their first [representative] superhero, and I’m so excited for Asian kids to have that same feeling of having a good role model that looks like them … I think the fact that these characters are being superheroes alone already is just breaking a ton of stereotypes at the same time because East Asian men traditionally in Western culture have been seen as very feminine, which plays back into years of history.”

The Asian American superhero Ahsan refers to is named Shang Chi, played by Simu Liu, from the recently announced Marvel movie “Shang Chi and the Legend of the Ten Rings.” Liu will be the first Chinese actor to play a superhero in a mainstream movie, starring alongside a mostly Asian cast, including Awkwafina and Tony Leung.

Historically, characters within the Marvel Cinematic Universe (MCU) who have been played by AAPI actors have all played minor roles, like Mantis from “Guardians of the Galaxy.” As a longtime fan of the MCU, senior Abhinav Kommula shares the same sentiments as Ahsan, stating that casting diverse superheroes will have a powerful impact on future generations. Kommula believes that the shift of AAPI characters from minor to major roles will help break stereotypical views that many people have regarding the AAPI community while giving today’s children stronger role models.

“It’s really important that, especially for young children who are Asian, they don’t have to continue to watch movies where people are constantly viewed as timid, anxious about everything, [who are] very stingy with money and all that,” Kommula said. “I think there were studies done on how people do start subconsciously internalizing information they see [at a young age], like how Asian people are portrayed in movies, and so I think that by giving more [diverse] roles, [Asian] people [won’t have to conform to certain stereotypes].”

Along with the significant positive feedback it received after its announcement, “Shang Chi and the Legend of the Ten Rings” has also faced negative criticism from audiences in both the U.S. and China. MVHS alumna ‘19, Michelle Tang, says she is “cautiously optimistic” about the movie. While she agrees with Ahsan and Kommula about young Asian Americans being able to feel seen through Shang Chi, Tang is apprehensive about the movie being a repeat of a stereotypical kung fu film.

Tang, who is currently studying animation at the California Institute of the Arts, believes that although martial arts have ties to Asian culture, it is hard for her to relate to it because it stems from older, mythological times. Tang aspires to showcase stories more relatable and encapsulating of the Asian American experience in her career as a means of representing modern-day times more effectively.

“Some specific stories I want to tell are about the language barrier between my relatives in China,” Tang said. “I personally struggle with speaking fluent Chinese, so I can’t talk to them. Seeing that story, that struggle told on screen would be cool. Also seeing what it’s like to have immigrant parents and the expectations upon you, going through school and just being raised in this Asian parenting style in America would be a cool story to tell. These stories are more personal, more modern, and the stories about kung fu are ancient and people can barely relate.”

Although the movie plot may not be relatable to audience members like Tang, Marvel implemented specific measures in order to ensure the portrayal of AAPI individuals is accurate and respectful. For example, the original villain in the Shang Chi comics, Fu Manchu, is believed to be based upon xenophobic ideas. Manchu embodied the idea of “yellow peril” — the racist fear that Asian immigrants threatened the safety of white society. Because of Manchu’s bigoted origins, Marvel erased the character from the movie and replaced him with the Mandarin — a villain who traditionally rivaled Iron Man and whose existence has been teased multiple times in previous Marvel films, like “Iron Man 3.”

Ahsan has high hopes for representation in the MCU specifically because the films have created such a detailed and intricate world.

“Because the MCU is all integrated, people will be motivated to go watch it,” Ahsan said. “Despite people [perceiving some movies] in a positive light, I think it needs to be taken a step above that sometimes. ‘Crazy Rich Asians’ was a great movie, but people stopped talking about it pretty quickly. I hope that with Marvel’s changes, that won’t happen because the way the MCU works is so unique, it all works together. Marvel fans, whether they like it or not, are going to have to live with it. I hope that this changes the mind of some ignorant people.”