Part 3: How schools are funded

Exploring how CUSD and other school districts in California are funded 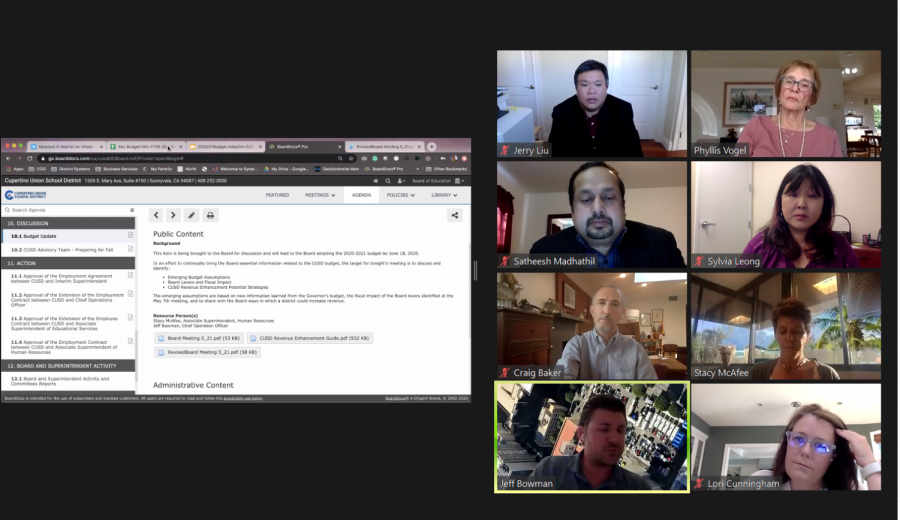 CUSD board members discuss options for budget cuts. The board meeting lasted over four hours.

In 2017, the CUSD board selected a new superintendent, Dr. Craig Baker. Board member Phylis Vogel notes the community was divided after the recent release of Gudalewicz and subsequently, Baker would have to resolve much community distrust, stemming especially from parents.

“The community was really split and divided and mad about what the district had done,” Vogel said. “They were angry with all of us. We wanted a healer. We wanted someone to come in and bring the community back together. We were being accused of lack of communication [and] lack of transparency. We had all kinds of anger leveled at the board and at the district.”

Additionally, Baker would have to resolve a new, more prominent issue: how to increase school revenue and decrease expenditures to prevent deficit spending.

How Schools are Funded by Creative Media Kennedy

Liu explains that the figure of $8,500 per year per student is changed yearly through the Cost of Living Adjustment (COLA) which California uses as an adjustment for factors such as inflation, cost of living and rising wages. While CUSD does not have a significant number of special education students, reduced lunch and ESL students, these figures also affect the COLA. Because of COVID-19, Liu says that California’s COLA for the next three years will remain stagnant, but board member Phylis Vogel argues that COLA has never been enough in Cupertino to begin with.

“COLA ends up being around two or three percent if [anything] at all,” Liu said. “Our operational costs increase by about 4% a year … COLA is another unreliable source [of money] for us because the legislature just decided every year what the COLAs are going to be and it’s never enough to cover our operational costs.”

In 1978, Proposition 13 froze all property tax assessments at the assessment value of the property in 1978. Unless the property was sold, the property received a 2% annual increase. This freeze in property tax hurt many school districts, keeping LCFF funding at 1978 levels until businesses and homes were sold.

In 2020, voters in California voted on Proposition 15, which would make commercial properties exempt from Proposition 13, meaning that their property would be taxed at market value. Proponents argued that this would provide billions of dollars in increased funding for government services and schools; however, Proposition 15 failed to pass with California voters. Liu says that if Proposition 15 had not failed, it would have given CUSD approximately eight million dollars of additional revenue that could have offset its seven million dollar deficit spending.

“It’s a hard question to answer because numerically you could … say that you are looking to take five to seven million dollars out of the facilities and if you got another eight or nine million that could have plugged that hole,” Liu said. “But then we have other needs. For example, we haven’t adjusted the salary for our employees since 2018. So then the question is, ‘Do you want to use [the money] to prevent school closures or do you use some of that, for example, to give raises to the teachers?’”

With the failure of Proposition 15, CUSD continues to be a school district reliant on Basic Aid from the California government as property taxes are not enough to fund the district. Former superintendent Dr. William Bragg argues that schools that are growing are always better off than schools with declining enrollment.

“One of the things that happened based on the way schools are funded, [is that] if you’re a growing district, you are financially much better off than if you’re declining,” Bragg said. “That’s because the increased revenue you receive through increased students, not all of that has to go to pay for the teachers and the cost of educating kids. A lot of that can go to [other things such as] infrastructure.”

“There have always been financial issues in Cupertino,” Vogel said. “The big downturn in 2008 — we were recovering from that [and] the state was helping us out a little bit. By comparison to other times in our school district I would say [the 2010s] were good years for us.”

There have always been financial issues in Cupertino. The big downturn in 2008 — we were recovering from that [and] the state was helping us out a little bit. By comparison to other times in our school district I would say [the 2010s] were good years for us.”

With declining enrollment, Liu argues that a combination of various cuts and an increase in other revenue outlets could prove to allow CUSD to become more financially solvent. A potential solution could be to receive more donations. CUSD Board member Lori Cunningham says that she has witnessed a lack of knowledge within the community about CUSD’s financial situation, which may affect the funding for the solution.

Liu acknowledges that CUSD raises significant amounts of money, but he notes that most of those funds raised are for individual schools, not for the district as a whole.

“[Donations to individual schools] doesn’t really help us with things like keeping the lights on and paying the teachers and all [and] that because that’s not what that money is for,” Liu said. “We’ve tried district wide donations — that hasn’t really [worked]. I think last year, the donations were in the hundreds of thousands. So it’s magnitudes off, because we’re talking millions and tens of millions here.”

Liu adds that there is a misconception throughout the community and corporations that CUSD generates revenue from Apple Park. However, the location of Apple Park falls outside CUSD boundaries, meaning that its property tax funds the neighboring Santa Clara Unified School District. Cunningham says that corporations are looking to make donations to school districts that are more historically disadvantaged.