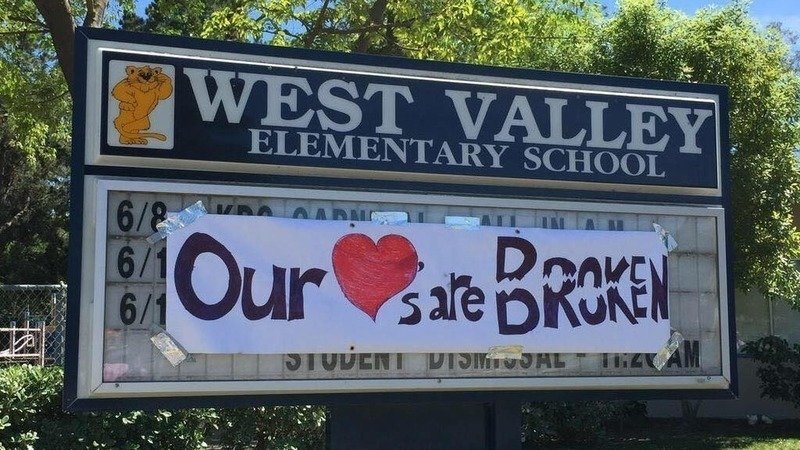 West Valley Elementary School parents and students were shocked after every staff member was reassigned.

By 2012, CUSD superintendent William Bragg had been retired for six years and CUSD’s phase of growing enrollment was starting to slow. Vogel, along with the rest of the board, appointed Wendy Gudalewicz as superintendent in 2012, replacing Phil Quon.

“We were looking for someone who was really strong in the curriculum,” Vogel said. “We hadn’t adopted new material in various areas for a long time. Our whole curriculum had gotten a little bit stagnant and we wanted somebody who had some expertise there.”

Gudalewicz believes she accomplished this by implementing new standards and curriculum in literature and math.

“I think changing some of the way teaching and learning happened [was] a major focus for us,” Gudalewicz said. “Getting technology up and running and in kids’ hands, the one-on-one iPad was another big accomplishment. But I think most of [our success] was a big shift in the culture of teaching and learning.”

“I went out and shared [the information] with the community [and] every single school shared with [the community] that there’s a declining enrollment, which means you’re going to have declining revenue,” Gudalewicz said. “Every time I would go out, the group would say that we were making it up, that there was no decline. Liang [Chao] herself fought it, she said I was making it up, it’s fake, [that] there’s no decline in enrollment and there obviously was.”

Chao disagrees that Gudalewicz was transparent with her and the community. She also adds that she believes that declining enrollment was good for CUSD, stating that schools are currently overpopulated and notes that under Gudalewicz and other CUSD superintendents, the budget had increased every year. Board members say that schools using portable classrooms are not overcrowded as the majority of portables used at the time were not meant to move and that funds increase yearly because of the state’s Cost of Living Adjustment which adjusts funding to schools year to year.

However, Gudalewicz’s most controversial and upsetting decision to parents was her handling of the West Valley Incident, in which teachers at West Valley were all told that they would have to reapply for their positions. No teachers were rehired. Craig McPherson, a parent of two West Valley students, describes the West Valley incident from a parent’s perspective.

Gudalewicz says that she stands by her decision to not rehire any teacher to West Valley because she believes it ultimately benefited the school.

“There [were] some things that were happening at that school site that were not good for kids and one of the things that I had said after we [changed West Valley] was [to] wait and see what happens,” Gudalewicz said. “I’ve looked back, I’ve seen what happened, [West Valley] became a distinguished school. So if someone wants to say that was terrible, I always say look what’s coming, look what’s coming of it and it doesn’t look to me as the school went backwards, it looks as if it’s gone forwards.”

I’ve looked back, I’ve seen what happened, [West Valley] became a distinguished school. So if someone wants to say that was terrible, I always say look what’s coming, look what’s coming of it and it doesn’t look to me as the school went backwards, it looks as if it’s gone forwards.”

“I’ve had many sales teams and service teams and sometimes people butt heads,” McPherson said. “You’ve got to be a strong leader to push forward and bring people back in and so forth. If you have a group like that and you don’t have that leadership, then yeah, things can kind of get out of control. Do I think that it was to the point where that entire school needed to be blown up? Absolutely not.”

McPherson adds that his opinion was shared by other parents. He believed that while there may have been issues in West Valley, there was no reason to completely implement a new set of staff.

“Talking to a lot of people [at the time], they just felt like here and there, there [were] some things, but nothing that you would ever think the administration would say, ‘This is so bad that everybody’s got to go,’ or everybody [has to] reapply,” McPherson said. “I think that if you have the right leader in that school, none of that would have ever happened.”

But Vogel disagrees, as her opinion at the time was that the board and Gudalewicz’s decision to disband the entire school was the best way to resolve the alleged infighting at West Valley.

“We supported that decision [but] in retrospect, looking back, would I have supported that same decision today? Probably not,” Vogel said. “But at that time, it’s all about timing, it felt like the right decision.”

Vogel also doesn’t agree with the community’s assertion that the West Valley incident was Gudalewicz’s fault alone. Vogel says that the decision to not give any teachers their jobs back at West Valley was a decision made by not only Gudalewicz, but also the rest of the board.

According to McPherson, the largest impacts of the incident were felt by the older students. However, he says that contrary to what some in the community believed, younger students did also have an understanding of what was happening.

“We had some of the protests or meetings down at the school and all the kids were down there,” McPherson said. “They were writing messages of thanks to their old teachers on the school grounds. And so I think some of them, especially the older kids, were really impacted.”

Vogel believes that, while she supported Gudalewicz’s decision, the decision turned the public against Gudalewicz. She believes they scrutinized every subsequent decision she ever made as superintendent.

“[West Valley] was  the start of [Gudalewicz’s] downfall in terms of her image with the community,” Vogel said. “After that happened, the community began to nitpick. It was like everything she did, she couldn’t do anything right.”

Vogel believes that the public often overstepped with its criticism online and through social media, which she believed was unfair and uncalled for. But she maintains that the board, andat the time, never lost faith in Gudalewicz. It wasn’t until the winter that the board’s opinions on her began to split because of the community’s views on her.

Gudalewicz, on the other hand, does not believe that parents overreacted. She says that a level of concern comes with unexpected decisions.

“I think that there’s a level of concern anytime you have anything that happens that’s unexpected, you’re going to react that way,” Gudalewicz said. “It’s like the world right now when people work in an environment of uncertainty, what happens is people’s anxiety goes up and people have concerns — they push back.”

I voted yes, to release her but the only reason I did that … was because I wanted it to be a 5-0 vote in the face of the community. I didn’t want the community to see the board as split.”

The CUSD board faced public pressure to remove Gudalewicz from office, which they eventually did by unanimous vote in 2017. Vogel, as one of the board members who voted for Gudalewicz’s removal, says that she only made the vote to remove because she wanted it to be unanimous. Vogel says that she had hoped to work with Gudalewicz in order to resolve the issues at hand.

However, Vogel believes that some of the criticism was unwarranted and just outright mean.

“I just remember all the stuff on social media and all of the phone calls and emails about what a bad job [Gudalewicz] was doing and how awful she was for the community,” Vogel said. “Granted, she made some mistakes, but she really cared about kids and that’s what really mattered to me is that it’s about kids. I thought she was mistreated by the community so I think for her mental health and her own career, it was a good move for her.”

Gudalewicz accused board members at the time, but now accuses Chao, for spreading dissent among the board members. Gudalewicz also says that Chao did not give her a chance before starting to call for Gudalewicz’s removal.

Chao states that she was just doing her job, and she was just one board member who could only influence so much in the community.

“I’m just doing my job asking for things I think a board member should ask, and she’s unwilling to answer such questions,” Chao said. “But then I was one board member, I couldn’t remove her … I don’t feel [like] I’m asking for things that [were] unreasonable. So eventually, two of the other board members were the ones who also realized they would like to maybe have a change of leadership.”

Gudalewicz believes that although her tenure at CUSD was cut short, she had an “excellent evaluation before [she] left.”

“The board and I left on good terms,” Gudalewicz said. “It wasn’t a case where they thought poorly of me. It was more of, if you have conflict like that, at some point you have to be able to say how you’re going to resolve it and what you had was you had a group of people who decided they were angry with me and they were going to keep pushing and pushing until they got their way. That’s what happened. Plain and simple.”