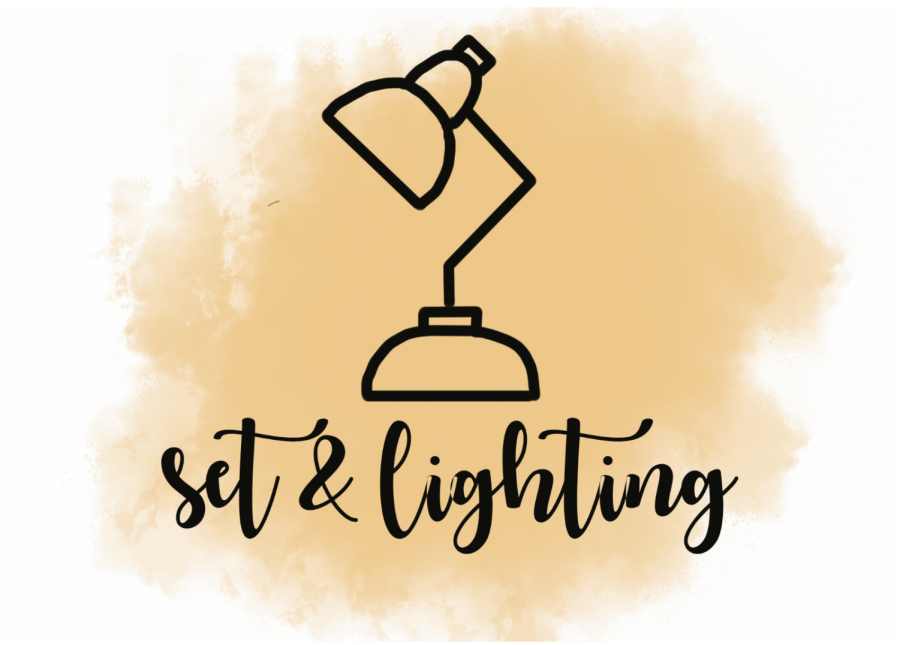 When junior Daniel Mathew walked into the Blackbox for the first time freshman year, one thing immediately caught his eye.

“[It] was a table saw,” Mathew said. “I was like, ‘I want to use that — that’s so cool.’ I’ve used that [tool] for two years now [to build sets] and at this point, I’m pretty much the only person who uses that saw. Cutting wood, measuring it out and drafting the set is probably my favorite part [of producing plays and musicals for MVHS Drama.]”

In previous years, Mathew worked with managers of the set team, formally known as Set Leads, as he contributed to building sets for “Eurydice,” “Into the Woods” and “Mamma Mia.” Following these experiences, Mathew was placed in charge of collaborating on and compiling the set vision for “The Misanthrope” as the Set Lead. Since the play was produced fully online, he had some initial fears about the limitations of creating an online set.

“Because a lot of the set is just props and background, the images you can find or create online are generally almost the limit of what we’ve been able to do with the set,” Mathew said. “It’s hard [for each actor] to create large structures or have matching tables and chairs [at home], so your entire scene is whatever your [virtual] background is … Also, because of how everyone is separated and away from each other [on Zoom], we have to distribute props across multiple households — we sometimes didn’t have enough or sometimes it [was] hard to find a way to distribute them.”

With these setbacks in mind, Mathew and the set team continued to collaborate on image layout ideas. As one of the set assistants, senior Olive Tang explains that the set team’s overarching vision was to combine both traditional and modern themes.

“When introducing the play, Ms. [Hannah] Gould actually [presented] the concept,” Tang said. “We were able to provide suggestions as well, but basically the idea was to somehow use the aesthetics of the 1960s with a more modern concept. Throughout the play, you might see people pulling out their phones or wearing earbuds. But we fused it by having the actors wear more traditional-looking costumes and the design of the virtual backgrounds would also be more traditional.”

Junior and set assistant Ashlyn Lopes also recognized the importance of taking minute details into account. When compiling the background images for each scene and location change, the set members had to pay attention to various factors.

“We had to figure out where the actors should be, and we would have this general theme of old classic furniture and settings [in the virtual backgrounds],” Lopes said. “[In the main scenes], we were looking for images with French Baroque style furniture, but this was really challenging because this type of furniture is very intricate. [For other scenes like] the garden scene, we would try and find [a virtual background] that [fit] the mood — the light, the time of day and the mood of the character would have to [be taken into account] so that the characters and the background [would match].

With the help of stage managers and director Hannah Gould, the set team primarily used class time to collaborate on background ideas. Lopes notes that the team would paste their various image ideas onto a master Google document where they could each compare their suggestions. Then, they would move on and take note of which actors needed assistance with their background screens during rehearsals.

Even after the advanced planning, there were various problems that arose when the set team tried to get virtual backgrounds to work. At times, parts of actors’ bodies would disappear when moving too close or far to the camera and the background would blend into certain parts of their bodies. Mathew notes the various steps the set team took to solve these issues.

As the set team and actors solved these technical problems, they were able to record the play in different segments during class time. Now that the play has wrapped up its premiere, Mathew notes some of the lessons he learned as Set Lead. He touches on the nature of an online collaboration scene, which allowed moments of special collaboration between the actors and tech crew in order to produce the final product.

Similarly, Lopes appreciates being able to work on a production and acting team with diverse skillsets for “The Misanthrope,” and highlights the importance of every contributing role for the play.

“I got more involved with the whole process of production development to a greater extent, which was really fun,” Lopes said. “I learned more about what is required for [a virtual play] to actually work. Even though it’s very different from in-person set creation, [creating a play online] definitely [was similar in the sense where we] matched what was going on in [the] play and [the] characters [moods] … It’s amazing to have it all come together at the end — I love that every role is incredibly important to the development of the whole show in order to make it a success.”