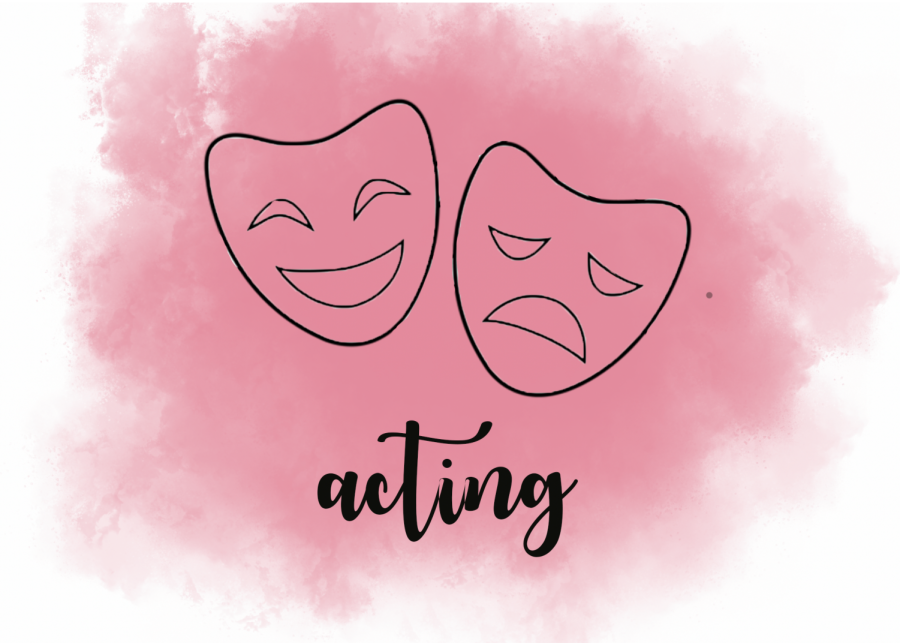 Plastering a theatrical grin and belting out an artificial sneer, senior Sylvana Northrop projects the focal quality of her character: two-faced insincerity.

“My character just really adds into the feeling of fakeness and the feeling of performance for a specific person,” Northrop said. “Me and my other suitor buddies [in “The Misanthrope” are] constantly vying for [the female lead’s] attention by laughing at other people and by making jokes ourselves. My role is really just to show how a group setting can bring out the worst in people.”

To channel the self-conscious persona of Clitandre, one of two suitors for the female love interest Célimène, Northrop acts as if she’s under the shrewd judgement of other people. As Clitandre, Northrop’s facial expressions change when a character enters or exits a room — Clitandre is “critical” when with his acquaintances, but parades an easygoing, “laughy-laughy” image when in Célimène’s company.

“[In a scene, Acaste and I] just made a deal about how if Célimène shows that she favors one of us over the other, then we will completely step out and leave the playing field for the other person,” Northrop said. “And then all of a sudden, Célimène enters the room and we turn into: ‘Oh, hi! How are you, how are you?’ It’s a moment where you see really how fake we are to even the people that we claim to love.”

According to Northrop, every character has a “different personality” with each person they converse with. Noting that in real life, interactions with her sister versus with her friends are distinct, Northrop played up such nuances in daily social situations to mirror Clitandre’s multiple personas.

“One of the things that I really like about acting is that I can try on different personalities; I can use aspects of my personality to influence it,” Northrop said. “And I think it’s just a really creative process — that’s a big part of what I like to channel my creative energy into.”

When senior Anushka Savale was cast as the protagonist Alceste for the “The Misanthrope” in mid-September, her initial reaction was: “God, I hate this guy.”

According to Savale, Alceste is an “opposing character” to the cast in the play because he scorns the “falsities of the nature of [French] society” — how the general public puts up a faux image, hides emotions and never says what they actually believe. As a result, Alceste juxtaposes the proper sophistication of the cast, giving a “breath of fresh air” as a miserable, yet honest “misanthrope”: a person who loathes humanity.

Although Alceste is presented as a cynical and pessimistic suitor, Savale wanted his character’s one-dimensional, gloomy exterior to have more nuance. Recognizing that Alceste is in an unrequited infatuation with Célimène, Savale hopes for viewers to sympathize with Alceste’s heartache in moments where Célimène treats his feelings “like they’re dirt.”

“It’s really easy to hate this guy because he just hates everything,” Savale said. “But … he is a complex character. He’s not just a guy who hates people, who hates society … but he’s also a character who’s had his heart broken many times and he’s tried to make it right with this woman … I wanted people to like him because he has a part of him that’s likable, and he’s not completely terrible.”

As a female, Savale found it difficult to bring a “balance of masculinity” to Alceste’s gender neutral character. According to Savale, the feminine aspects of Alceste were easier to convey; for Alceste’s masculine attributes, Savale turned to Pinterest boards and TV shows to analyze male roles.

“When [Alceste is] talking to Célimène, it’s not necessarily like a feminine aspect, but it’s a softer masculine aspect,” Savale said. “The femininity doesn’t come out there, but I feel like the masculinity comes out, even though he’s not being so typically commanding or dominant … You can see this more typical dominant masculine side of him when he’s saying his speeches of what his beliefs are, his ideologies … he’s very confident and passionate [in this context].”

Likewise, junior Roma Hashemi also struggled to play the brute manliness of Acaste, a villainous and narcissistic man pursuing Célimène who adds an “aura of comedic relief” from the main conflict. Although Hashemi has played soft-spoken “feminine men” in the past, initially, Acaste’s bold rudeness was challenging to project.

In the beginning stages of rehearsal, Hashemi played Acaste as a proper and “perfect” character. However, after deciding to add more perspective to her character, Hashemi changed gears, giving Acaste personality flaws and a “I’m the best of the best” attitude.

“I have this scene with an apple and I’m supposed to be chewing it, spitting things out and talking while I’m chewing — it’s just disgusting,” Hashemi said. “Rehearsing that got me into the essence of the character.”

For Savale, acting out Alceste’s character complexity — a lovestruck, idealistic man brooding over society’s two-faced masquerades — was demanding because of Zoom’s limitations. With Zoom only displaying the upper body, Savale notes that body language — an essential for character portrayal — is bound to the Zoom frame. Without “blocking,” or moving to stage positions during a scene, actors needed to improvise non-verbal adaptations to stay in character.

As a result, the actors placed more emphasis on line delivery and facial expressions, as well as the pauses and reactions between conversation. According to Hashemi, virtual productions call for actors to pay close attention to discussions, since there is no physical separation, set or actionable movement. To maintain character without speaking, Savale has been practicing active listening, reacting and navigating a character’s psyche.

“You have to figure out what your [character’s] thought processes are while the other person is delivering their line,” Savale said. “It’s not only important to break down your lines and figure out what you mean behind what you’re saying, but also figuring out what the other character is saying, and you reacting to that … there’s a lot unsaid in regular dialogue as well … You’re analyzing — what [does another character] mean by saying that, and how do you want to respond to that in a way that can be in your favor?”

To Northrop, the fun backstage moments in productions — inside jokes, learning dances, rehearsing and “goofing off” — made the drama come together. However, without cast bonding and social interaction, Hashemi associates distanced acting to be less dynamic and expressive.

“In person, all our energies are always bouncing off of each other; [when] you look across the stage …. see someone else, you [are] propelled to do more,” Hashemi said. “But … the way I set up — I was literally in the corner of my room. And it was just sad … There was definitely a lot more effort into putting energy … but it’s just harder to do that when nobody else’s energy was lifting us.”

Even with the challenges of acting over Zoom, Northrop still appreciates how online theater presented an “interesting” experience to grow into her character in isolation. Although there was no physicality or grandiose costuming, Savale values how “The Misanthrope” has helped her grow as an actress by “stretching [her] artistic boundaries.” To think out-of-the-box and find the “magical moments” in acting without the proper equipment was a difficult, yet exciting change.

“It’s different [and] it’s new,” Savale said. “There are times where it can be like, ‘Oh, my God, why am I doing this?’ because you don’t have that same excitement of going to rehearsal, interacting with your fellow actors and … feeling like you’re [a] part of a play. But at the end of the day, you’ve got to realize that you’re still [a] part of [a production] … It’s still fun. It’s still exciting. You still went through the effort.”