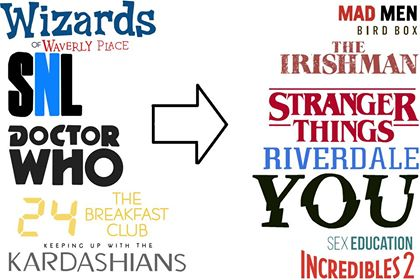 When Netflix was first founded in 1997, it was merely a website that allowed customers to rent DVDs and have them delivered by mail. After years of change in the way the content has been delivered, the platform is now a monthly subscription service that offers a wide selection of TV shows and movies from different cultures and different networks for a wide range of audiences.

With popular titles like “Friends” and “Rocky” leaving and “You” and “The Irishman” replacing them, Netflix’s selection is constantly changing. However, what comes and leaves the platform is not entirely Netflix’s decision. The factors that are taken into consideration are the licensing agreements that Netflix has with the company who provide the content, how popular the title is (which is measured based on view count), how expensive it is to keep it, member feedback and if similar titles already exist on the platform.

Sophomore Aryaa Pathak has been streaming media from Netflix since she was in sixth grade and dislikes the recent choices the platform has made in regards to removing content. She feels that Netflix normally makes watching media more convenient, but certain content removals have drawn away that.

“Obviously, there’s licensing agreements and stuff and shows do come and go, but I don’t like the fact that really popular shows come and go like ‘Friends,’” Aryaa said. “The only way to watch it [now] is to buy it off YouTube, or if you go on Xfinity, you can buy it there, but you can’t really watch it for free anymore. I mean, Netflix is not free, but you can’t watch [these shows] anymore for free.”

Junior Yash Pathak has been using Netflix for 10 years and believes that while the streaming platform’s general audience of “people who want to understand pop culture” has remained consistent, the content Netflix offers has become more unique.

“Back then, it was anything Netflix could get their hands on — there would be a lot of Disney Channel stuff and stuff like that,” Yash said. “Now, Netflix for me is really like a powerhouse of making its own stuff and I think in a future where Netflix just purely becomes its own stuff and it doesn’t bother with any other movies or TV shows, that’d be completely great.”

Aryaa believes that Netflix’s current media has fewer offerings for her due to an overall increase in shows and movies that contain explicit content. She feels that as Netflix’s content library expands, fewer parents will want to subscribe to the service for their children and ultimately business will decrease for the provider.

After having had an account for some time when Netflix solely rented DVDs and then resubscribing to the service when it started streaming content, English teacher Vanessa Otto believes that the platform now offers a much greater variety of content and is rivaling traditional box office movies with its original films.

“On Netflix, you can pause, go to the bathroom, get a snack, have the subtitles, have whatever comfortable volume you want [and] not have someone hacking next to you,” Otto said. “It’s a lot cleaner, so I think that’s a definite plus. But the types of stuff they have, I’ve noticed that there’s a lot more diversity in the actors and just unique movies like in TV shows that you wouldn’t usually see on mainstream TV or the theaters.”

Yash also points out the issue of a lack of diversity in media produced by Hollywood and believes that Netflix has begun to target that.

“Their content really is about getting unique and diverse voices, and I think as long as you continue to get [films from] Hollywood, the whole system really is rigged against [you] if you’re not white [and] if you’re not male,” Yash said. “As much as I’d like to believe that we should judge people based on their artistic integrity in that field, we really do need to get some Asian voices, and I think Netflix is really doing that — it has a wide market for people with different voices.”

Overall, Otto views Netflix’s increased diversity in content with a positive light, believing that it will impact not only audiences, but also content creators.

“I guess it would inspire up and coming screenwriters to write something that they didn’t think there was necessarily an audience for,” Otto said. “Maybe this is a sign of better things to come and more diversity in the types of stories that are being advertised to the mainstream population.”