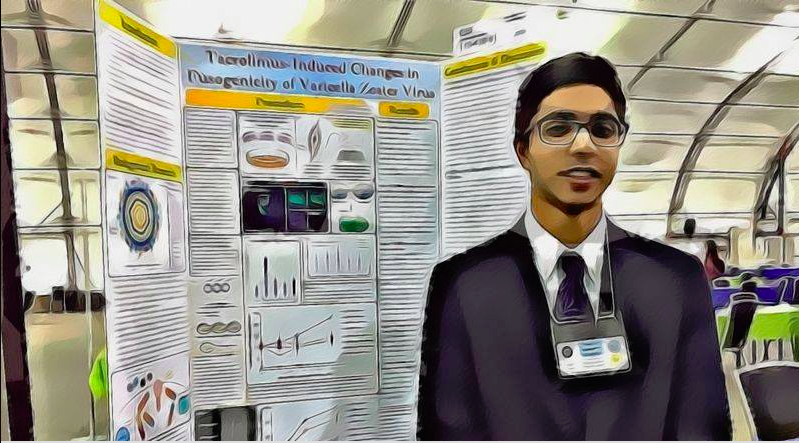 In the lab: Vivek Kamarshi receives recognition for science project

In December of 2018, senior Vivek Kamarshi was recognized in the 2019 Regeneron Science Talent Search for his work to increase cell fusion and decrease replication of the Varicella-Zoster virus, which causes chicken pox and shingles. Biology teacher Renee Fallon mentored Vivek’s research projects his freshman and sophomore year, helping him qualify for the California State Science Fair and the Intel ISEF, respectively. When Fallon received an email notifying her that Vivek had been selected for the talent search, she was incredibly pleased.

“Vivek has earned it,” Fallon said. “I’m honored and grateful to have had the opportunity to work with him, but he’s worked very hard and he’s earned what he got.”

Fallon advises students looking to achieve similar results as Vivek to practice science and continue to learn. She feels that a lack of equipment or the inability to work alongside a professor, which Vivek experienced with his freshman and sophomore year projects, should not stand in the way of completing a research project.

“If you want to become a scientist, you need to do science,” Fallon said. “Doing science is very different [than taking science classes] and it’s a lot more creative than people assume. But if you want to do it, then do it. It’s that simple.” 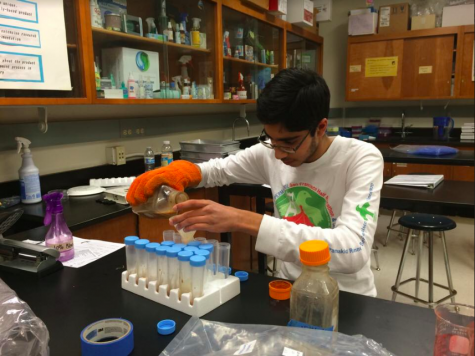 According to Vivek, this is something Fallon stressed in class and is “the truth [he] lived.” From gathering fruit fly eggs to treating them with low concentration bleach in a home lab, limited resources and space came as a challenge for Vivek — but this sophomore year project ended up being “serendipitous” for him. After presenting his research, which qualified for the Intel ISEF, Vivek struck up a conversation with the judge, who later took him into a Stanford lab.

“The judge actually worked in this lab and so after I presented to him, I was like, ‘Hey, just out of curiosity, what do you do? What’s your work?’” Vivek said. “He talked to me a little about it and I got his contact information, talked to him about it and ended up working in the lab that summer.”

When initially starting at the lab, Vivek was assigned to more basic projects that he completed as training over the summer. After a few months, he began work on the research that would eventually result in his recognition as a national Regeneron STS scholar.

Prior to Vivek’s participation at the lab, the lab’s researchers had discovered a specific drug that caused the rate of fusion of a Varicella-Zoster virus-infected cell to increase.

“It was a complete mystery, like ‘Why is this drug doing this? Who knows, right?’” Vivek said. “And that’s pretty much the point where I came into the lab and I was basically told, ‘Hey, you know, try and figure this out.’”

Vivek began his research process by reading other scientific literature, which was essential to gaining background information about his work.

Before adding his own contributions, Vivek had to first comprehend the existing scientific research, understanding the drug’s effects, what it would interact with and what effects it could have. Then, after gaining a thorough understanding of this process, he devised experiments to test these ideas and figure out the cellular pathway of the drug.

“The cool thing about figuring out this pathway is that you can find a step in the pathway where you can put a relatively harmless drug that’s going to access the virus’ ability to do cell-cell fusion,” Vivek said. “Or alternatively, make the cell-cell fusion go so out of control that the virus is not able to move — is not able to replicate or reproduce properly. So basically, hijacking that virus’ mechanism to work against it.”

During this process, however, Vivek experienced difficulties, particularly during the summer of 2018. The steps of the cellular pathway that he investigated involves proteins, which are transcribed and translated from DNA. By interfering with the DNA, the corresponding protein won’t be produced, which then allows Vivek to determine whether or not that protein was important. In order to do this, he had to design DNA to insert into the cell but ran into difficulties at this point of the process.

What made this setback especially frustrating for Vivek was that his mentors hadn’t encountered the same problem before. The novelty of the issue meant that he couldn’t turn to them for help.

“In science, sometimes when you have results that you’re not expecting or that don’t work, it can be a good thing, like, ‘Oh my God, I just found out something totally cool and exciting,’” Vivek said. “In my case, it actually didn’t end up being a good thing because I’m trying to create this tool that I can use to work with the DNA. It’s not even that my research is going in a weird direction; it’s that the tool’s not even working. So from that perspective, it was really kind of disheartening.”

However, Vivek kept working at the problem, continuing to approach the issue in creative ways.

“For sure, I learned a lot — probably I would not have gotten as good of an understanding of that process if I hadn’t had to bash my head on it so many times,” Vivek said. “[It] kept the project going in other ways, and some of those have actually led us in new directions too.”

Fallon commends Vivek’s perseverance, emphasizing that these are essential qualities to being a successful scientist and researcher. In a conversation with Fallon, Vivek noted how “lucky” he was to have been selected in the Regeneron STS. To some extent, Fallon agrees but still underscores the necessity of Vivek’s hard work.

Vivek’s parents Vijay and Bhavini Kamarshi also note the dedication and passion for research that they’ve observed in Vivek, particularly when he was working at the Stanford lab.

“Because his research mentor starts the day early and leaves early, Vivek has been getting up at 6:20 a.m. and leaves home by 7 a.m. every day in the summer to start his research early,” Vijay and Bhavini wrote. “He’s continued his research over the Christmas and spring vacations as well. He is genuinely enjoying stretching himself in his research and his understanding of the complex subject matter.”

Additionally, his parents recognize his perseverance and his ability to problem solve, despite the challenges he encountered during the research process.

“There were several occasions when he could have thrown in the towel, but he kept at it,” Vijay and Bhavini wrote. “The final outcome was a very credible piece of research that won him accolades. But more importantly, it gave him the confidence to know that he had the intellectual capacity, persistence and resourcefulness to execute the project.”

According to his parents, Vivek’s persistence and dedication paid off, helping him win research competitions and awards, work alongside professors and become a finalist for the talent search. And while Vivek’s research was selected in the Regeneron STS, his work on this project isn’t complete yet.

“Where the work is not right there, and I’m continuing to do research at the lab,” Vivek said. “But the goal is that if I can find out this process and find a way to get in the middle of that process [and] stop cell fusion. That’s where my project is.”