Exploring artists and the stories behind sculptures in Cupertino 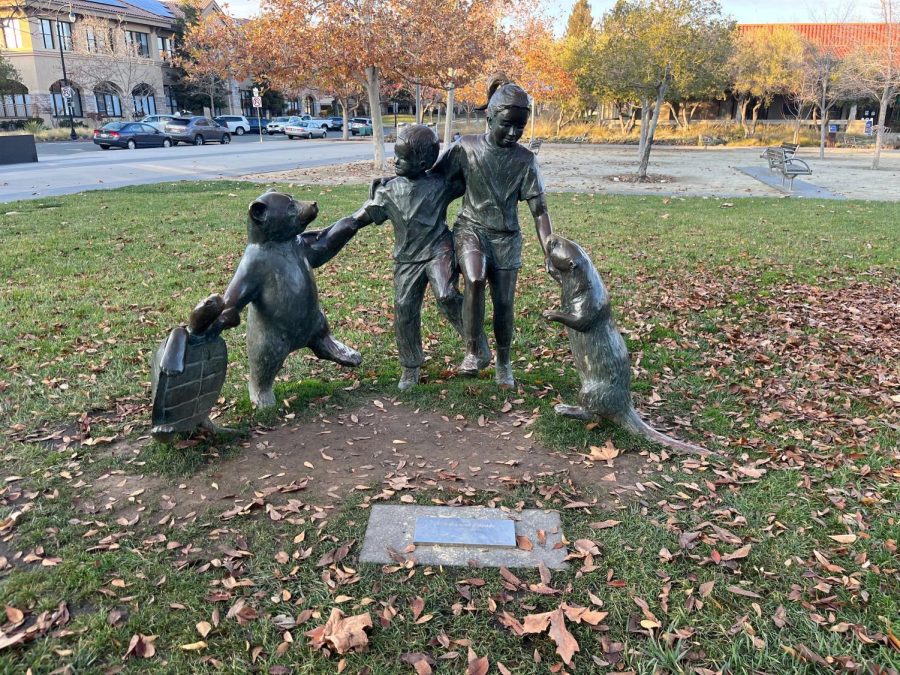 A sculpture of a young boy and girl holding hands with a turtle, bear and seal — “The Dancers” was sculpted by Georgia Gerber, and installed in the Cupertino Library Plaza in 2004. Similar to many of her other sculptures, “The Dancers” is a large-scale bronze cast sculpture. Inspired by art classes in school from a young age, Gerber began making small clay sculptures in her classes at school and eventually progressed to working on much larger pieces of art, leading to a love for public art, as indoor locations generally did not accommodate the size of her sculptures as well.

After earning a graduate degree from University of Washington, Gerber decided to pursue sculpting as a career, finding a plot of land in Washington and building a foundry at home with her husband, Randy Hudson. This allowed Gerber to produce all of her public art herself without having to outsource molding and casting materials from another foundry. Having access to a foundry also allowed Gerber and her husband to create a studio at their own home. Gerber’s husband manages the “business end” of the studio while she focuses on the creative aspect.

To get “The Dancers” set up, Gerber wrote a proposal for the idea, got it approved, received her materials and working conditions, and created almost 60 molds for the bronze — a process which Gerber states took six to nine months. Gerber wanted to create something similar to one of her own pieces, a sculpture of humans and animals dancing installed in a library in her hometown in Washington, but with California’s native animals.

“I loved working with the coastal species [and] the interaction of the human figures with the animal figures,” Gerber said. “I wanted to create a story and movement [with] nice lines and balance and try to find that dance with them. I thought it would just be a really fun piece to come upon because the animals are always inviting for the human viewer to be around and maybe [encouraging them to] hold hands and join the dance.”

Rather than having an existing story behind the piece in mind, Gerber hopes that viewers will imagine their own story after viewing “The Dancers.”

“They can imagine the story — why each animal is there, maybe name them or relate to them[selves or] something in their past,” Gerber said. “They can create their own story. It could be like a family thing within the household to tell the stories.”

“At four years old, I had a handsaw and I was driving nails,” sculptor Roger Berry said. “My dad worked with wood all the time. We had lots of material around so I was building things all the time.”

Berry, the artist behind the steel sculpture “Perspectives” in the Cali Mill Plaza in Cupertino, began creating art as a young child. He found himself constantly drawn to hands-on work and decided to pursue sculpture in his life after taking a sculpting class in college.

Berry initially thought he wanted to be an architect, but after working as one for a few years, he realized that it was not what he wanted to do because architects “didn’t get their hands dirty.” Drawn to making sculptures and creating larger-scale pieces, Berry began creating public art, with “Perspectives” being one of his pieces.

He originally submitted slides and a statement to the Cupertino Arts Commission as part of a competition for a project in Four Seasons Plaza, now known as Cali Mill Plaza, and proposed building four sculptures in the plaza, one for each season. The community voted to have Berry’s sculpture built, but soon after his sculpture was given the green light, the funding for the project went away. Though Berry says he is used to situations like this now, in 2001, unsure of what to do, he sent emails every few months to the Arts Commission asking if they were going to execute his project.

Eventually, the plaza was renamed to Cali Mill Plaza and the commission expressed interest in building a sculpture there again — but it had nothing to do with Berry’s original design. Over a period of six months, Berry made several proposals before finally coming up with a design inspired by his love for geometry that satisfied the commission.

“One day I brought in a little tiny model of the piece that’s [currently in the plaza] and I spun it on my fingers,” Berry said. “They said, ‘That’s it,’ and we began making contracts.”

The process from designing to installation took 18 months. Though happy with the final product, Berry says tedious experiences like funding cuts and scrapped projects were some of the most demotivating parts of his job as a sculptor. However, he says that the most important thing to do in times of burnout is to trust that something else will come along, which is aided by Berry’s environment on his ranch.

Berry, also a farmer, uses his land as inspiration for sculpting. He views farming and sculpting not as two separate jobs, but occupations that are woven throughout his life. According to Berry, he is a farmer simply because he bought a ranch with grapevines that had a barn for a studio, but he never stops thinking about sculpture, and views it as “beyond full-time.”

Berry wants viewers to take away the experience of the sculpture rather than just the appearance. With “Perspectives,” he wants them to view the piece from different angles.

“I’m interested in people seeing how it folds over itself, but also [pitting] themselves against the scale of this, imagining how improbable that form is at that scale in that place,” Berry said. “It’s an emotional, physical response [rather than] simply an intellectual response.” 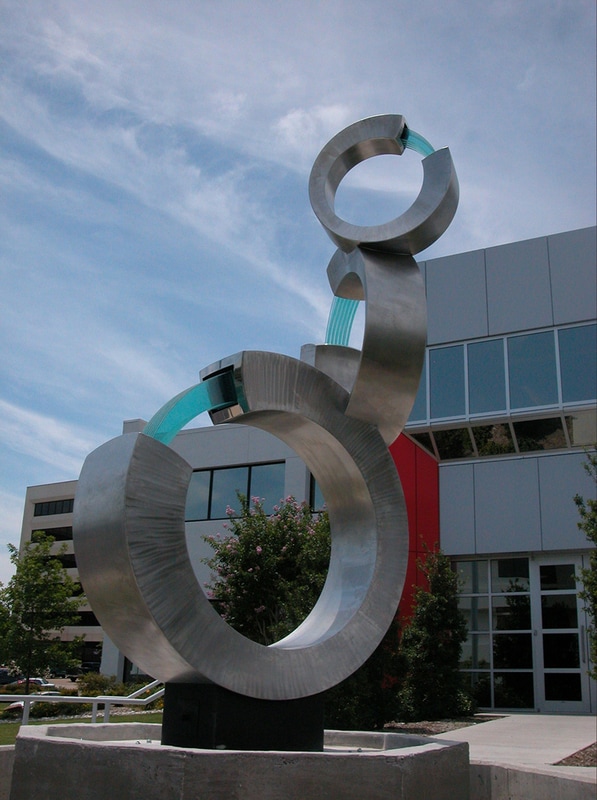 Previously a union sheet metal worker, artist Ulrich Pakker saw “too many pieces of beautiful stainless steel going to the metal recycler,” and began creating simple vessels like cups and bowls from them in 1990. In 1992, Pakker sold his first art piece to his employer, and has been working with sculptures ever since.

As a completely self-taught artist, Pakker works primarily in metal as a result of his artistic origins. Eventually tiring of making small vessels, Pakker moved on to making larger scale pieces like bigger sculptures and fountains. Though he was already working full-time at another job, Pakker opened up his own studio while juggling being newly married and a new father. He experimented with mediums such as fossilized walrus ivory, exotic woods and various types of steel before venturing into public art.

“[I] applied for a commission for a nearby city,” Pakker wrote in an email. “I proposed a piece twice as big [and] complicated as anyone else so I could win the commission. [I] made no money on it but [I] won the commission. Once I had a track record, my wife and I applied for more public art.”

“Glassflow” in Oak Park Village in Cupertino was designed and created by Pakker as a larger version of a fountain he created as an exhibit to serve white wine at an architectural conference. Once the concept of the piece was tested at a smaller scale, Pakker built a much larger, 6 by 14 foot version of the design in stainless steel with water running through it in Everett Arena in Washington. Pakker also created a plastic casing to prevent wind from splashing the structure’s running water onto onlookers. “Glassflow’s” dynamic nature led to Pakker installing it in over a dozen locations, one of them being Cupertino.

According to Pakker, location is a major influence on the piece he creates because of light movement, public proximity, traffic and structural foundations. He says the purpose of public art is “to create a personality for the site” in addition to how the public feels about the site before the art is installed.

“[Art] is a conversation created between each individual and the art [or] site,” Pakker wrote in an email. “Over the years these accumulated conversations [and] narratives create what the art signifies to the community, its visitors and perhaps even to the land the art sits on. The art may even earn a nickname, good or bad.”