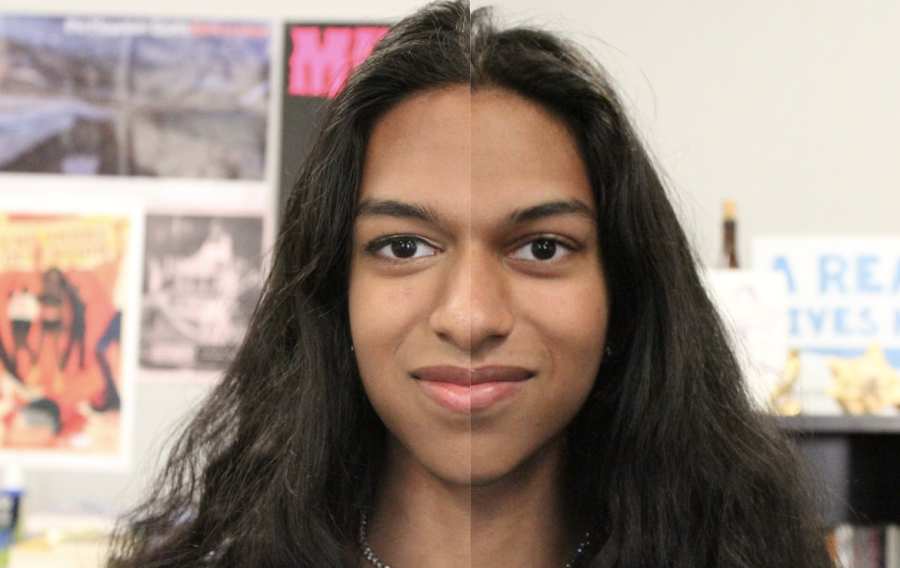 Junior Naomi Mhamunkar with and without a face of makeup, shown left and right respectively.

From externalizing internal emotions to being a facade, makeup is seen in different lenses throughout the MVHS population. According to a survey of 161 students at MVHS, 69% choose to not wear makeup, highlighting the role makeup plays in the community’s day-to-day lives.

Makeup, to many, is a form of artistry.

This very idea contributed to junior Naomi Mhamunkar discovering her passion for makeup in middle school. Mhamunkar states how she had an obsession with art back then and began dabbling with makeup after realizing that because it was temporary and could be washed off, she had more leeway to experiment with it compared to other art forms like painting or sculpting.

Both Mhamunkar and World Literature and Mythology teacher Megan Choate say that makeup can also be used as a way of self expression. Since Choate attended a Catholic middle school where wearing makeup was prohibited, her interest in makeup only began in high school.

“I went to high school, and then I had all this freedom of what I could wear, and I could wear makeup,” Choate said. “Even just putting on eyeliner and going to school was different than [what I could do] when I was in middle school.”

For Mhamunkar, makeup allowed her to connect more with her feminine side, particularly in the eighth grade. Mhamunkar, a trans woman, says that even before transitioning, she always believed it was important for men to be in touch with their feminine side.

“Back then, I did identify as a gay man, and I was really trying to show that men can wear makeup too — this isn’t something that only a woman can wear,” Mhamunkar said. “But I also did that by not wearing traditionally feminine looks because we need to break those boundaries of tradition. Makeup is so much more than just accentuating your beauty. [Because] while that has been what it’s diminished to, it can just so much more. And limiting it to one gender, that’s not helping and is constricting us as a society.”

Mhamunkar’s makeup began as extravagant face paintings and decorative patterns across her face, but she soon began using it to complement her physical traits.

“I like to do my makeup because I like to enhance my features,” Mhamunkar said. “Obviously, while I believe that my face alone is beautiful, I believe that there are certain things that I can do, like simply just putting on my winged eyeliner or putting on some lip gloss. [Those are] small things that can get me more noticed. It also can help with trans-dysphoria [since it] can just help make me feel more comfortable in my face, [and] that really helps a lot.”

Makeup, to others, is an unwanted mask.

Junior Irene Tian attributes her resentment towards makeup as something learned, as she had no choice over wearing makeup because of her participation in dance competitions growing up. To Tian, sitting in a chair and waiting for her mother to finish her makeup was painstakingly tedious. Eventually, her impatience with makeup led to her quitting competitive dance.

Tian’s biggest reason for her refusal to wear makeup is her dislike for being stereotyped as girly. In elementary school, she found pride in being called a tomboy.

“When I was younger, I just followed whatever my brother did,” Tian said. “So I liked typical stuff assigned to boys, like cars and running.”

So, Tian continued to reject anything dubbed feminine. She also adds that makeup can have a harmful effect, as it can cause one to overly reflect on the difference between how people perceive themselves to look versus how they would like to look.

Senior Arnav Kumar extends Tian’s point, stating that the makeup industry is harmful because it targets the insecurities that women, specifically young girls, have.

“The makeup industry has been [problematic] the way that they get young girls to be insecure,” Kumar said. “[In] India, you [have] Fair and Lovely that’s trying to make you feel bad about your skin color [by] trying to make you want to lighten your skin. They try to push [this idea] on young girls, especially nowadays, [with] 11- and 12- year-olds doing makeup — like full faces — which I think is too young.”

Tian agrees with Kumar and says makeup can influence people into conforming to convention and looking a certain way.

“I saw it as a way for girls and women to be more trapped [since they] put on this facade,” Tian said. “It felt like [women] were being forced to spend a lot of time and effort caring about how they looked and not about other things that I thought were more fun. I didn’t really care about my looks. I thought it was unimportant. It was very shallow — that was my opinion of it when I was younger.”