The customer is not always right.

The smoked duck Kathleen Guo had been selling for over 14 years sat on the table — her customer had just complained that it was dry, so she offered to take it off his tab. However, after ensuring that the dish was no different than it’s usually cooked, she asserted that the next time he came in, she wouldn’t serve it to him again to avoid another confrontation.

“I can’t sell the smoked duck for you,” Guo said. “Because I can’t handle which one is dry and which one is not dry. [And] if the duck is returned [again], it means I didn’t make money, but I paid [for] it.”

While Guo’s mindset seems hard in stone now, she only began fostering it when she started managing her own restaurants. Guo has worked in the service industry since she was 19, starting as a receptionist at a five-star hotel in China where she was trained that the customer was always right. Overtime, her experience culminated into steady promotions, as Guo moved her way up to assistant manager, and eventually the food banquet manager at the hotel.

“[At first,] I didn’t understand anything,” Guo said. “I just knew to be happy to work. My name is Guo Yang and my boss would always say, ‘Guo Yang’s smile is very very professional.'”

Guo worked at the hotel for almost ten years before immigrating to America in 2004 in order to be with her husband. Guo never went to college in China, so when she came to America, her job opportunities were limited — she wondered to herself, “What can I do?” She was 29 and married, so to her, college was not an option. She also didn’t have the money to pay for her tuition or compensate for her time, and she still had to pay for rent. She described that during this period of time, she just “had to live.”

She eventually took a job as a waitress at a small restaurant, describing how the language barrier — she had minimal experience with English only through interacting with foreign guests in China — caused her to struggle with the job. Her manager would never let her pick up the phone because she couldn’t fluently communicate with customers. However, Guo persisted and practiced with her customers, pronouncing the words on the menu and essentially “order[ing] for them.”

As a waitress, Guo was unfulfilled with just “clean[ing] the tables and tak[ing] the orders,” and unable to interact with guests. The staff-manager discrepancy in opinions and decisions left her feeling a loss of autonomy, culminating into a desire to “work for herself.”

Due to the popularity of Shanghai dishes and the demographics of the area, Guo decided to open Bamboo Garden in Mountain View to serve the “real dishes of China,” serving a mix of spicy and mild foods because she noticed that “young people like spicy food, but kids [can’t] eat them.”

She sold that restaurant and moved to Cupertino, where she found a more favorable location — as her last restaurant was next to a gas station — with a large Chinese population and other small businesses, opening XLB Kitchen which serves Shanghai and SiChuan Dishes, specializing in “小笼包” — Xiao Long Bao, a popular dim sum dish, because she noticed that even thought people really liked it, it was challenging to make.

Setting up the new restaurant was laborious — every aspect of the building had to be under code: the kitchen, floors and even the width of the doors were regulated. Guo had to make sure that the restaurant was perfect when the inspectors came because their signature determined if XLB Kitchen could officially open or not — if there was no signature, there was no restaurant. Guo had to wait “a long time” before she could open the restaurant, describing how her “心情很糟糕，很不好,” — her emotional state was disastrous. Since she rented the building from a landlord, she had to pay rent even when the restaurant wasn’t open, practically giving away her money until it was approved.

However, this stress was relieved when she finally opened the restaurant in 2018: business was good and she was finally relaxed and happy. But this state of contentment quickly faded away when the pandemic hit two years later. As chains of restaurants were shutting down and the customers’ reluctance to go out ate into her pay, she stayed determined, keeping XLB Kitchen open because she knew that all she needed was “only a kitchen.” With four workers by her side, they pushed through the climax of the pandemic, serving to-go because of federal orders and maintaining the restaurant.

Even though business was slow, she’s grateful for her customers who helped her economically restabilize through their generosity and tips. After the height of the pandemic subsided, Guo slowly hired back her staff of 10. Guo describes how she treats her staff with the genuine kindness that she wants to be treated with. Since she’s used to being in the staff’s position, she views issues through multiple lenses and holds herself to being a “good boss.”

From a managerial standpoint, Guo emphasizes the cruciality of being patient. She remembers how during the pandemic, some customers would cut the line snaking alongside the building, and walk in, asking where their food was. Every time, Guo would politely tell them to wait outside.

One rule that Guo implements is that after a customer places their order, they can’t add another dish to their tab because “another customer will be waiting.” Since their kitchens are small, each dish is cooked individually in the order of the tabs, and it’s not fair to cut lines. 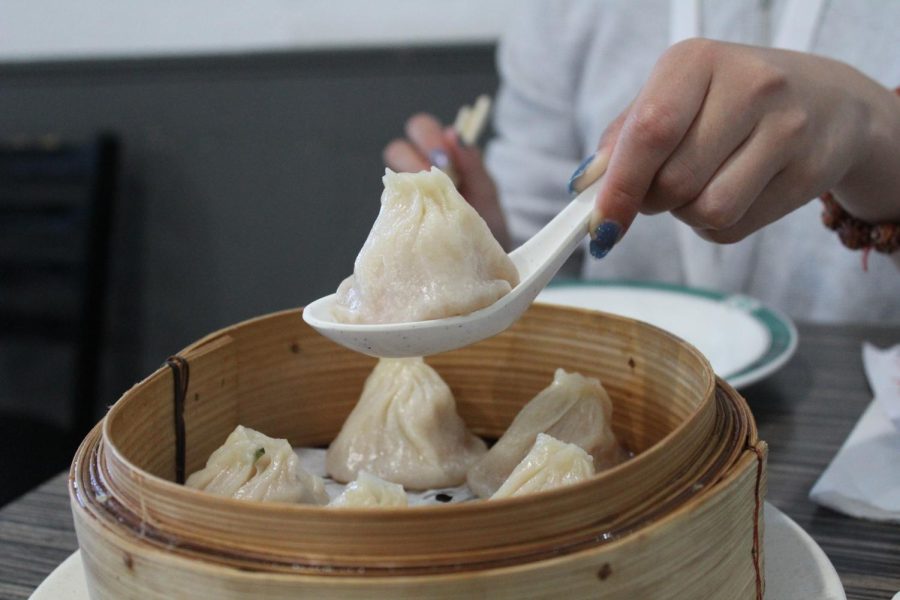 Even though Guo has owned a restaurant for almost 15 years, she doesn’t like cooking, joking how she never steps foot in her home kitchen. She was never taught how to cook, her only training stemmed from observing professional chefs at the hotel to help guide her at the restaurant. Presenting her calloused hands, she describes how although her job is to manage the restaurant, she still works hard and is “quick to service.”

Sometimes, Guo laments her situation, explaining how “it’s tiring” to work manually, emphasizing on how one should “use [their] head to make money and not [their] hands.” For her, there was “没办法” — no choice.

However, she still feels that she has learned a lot through her experience and believes that it helps make her a better person. One trait she emphasizes is honesty, especially in regard to a small business — “the customers and staff trust me so I must be honest.” She remembers one time, a customer gave her four one-hundred-dollar bills for a two-hundred-dollar order, leaving Guo to pause and laugh, “‘Is this a test or a [very large tip]?'”

She also learned that she needs to “发挥我的特长” — play to her strengths. This means standing her ground with stubborn customers, always making sure to “slow down,” because “just because one customer is unhappy, I can’t let everyone else be unhappy too.” But more importantly, she focuses on treating her customers and staff with respect, embodying the image of being “soft and nice.”

“For [my] Chinese restaurant, the service is [excellent],” Guo said. “Because [the customer] sees that [the] boss works hard, that’s why the staff will work hard. If the boss is very nice to the customer, then the customer will be kind [back].”