An acquired taste: Coffee and tea at MVHS

When Chinese teacher Zoey Liu used to visit her grandparents in China, she was introduced to various types of tea, as her grandparents “were always drinking hot tea, no matter what time of the year,” under the belief that “warm water is beneficial for [their] bodies.” As a child, however, Liu admits that she initially did not enjoy the bitter taste of tea.

“The first pot of the fresh tea leaves [my grandpa brewed] were always the most bitter,” Liu said. “But my grandpa was a very frugal man, so he would use the same leaves over and over again and keep on adding water until you can’t sense any bitter taste. That’s the pot I actually liked — the pot that has no bitterness, but you can still taste the fragrance of the leaves.”

Liu explains that frequently drinking tea throughout the day was so common in China that people carried transparent water bottles full of tea, and she “could see the tea and the tea leaves floating in it.” Liu also remembers that traditional Chinese medicine highly valued the benefits of drinking tea.

“There’s this belief [in China] that drinking tea can help you to detox,” Liu said. “People also [believe that] different teas have different functions. For example, according to Chinese medicine, if you have too much ‘fire’ that is not balanced in your body, you might have certain symptoms such as nose bleeds, fevers or dry throats. Then, you can drink chrysanthemum tea to help you to calm down that fire.”

Chemistry teacher Supriya Moore explains that drinking tea has scientific benefits for her health, as the tea that she drinks in the afternoon has flavonoids, a substance from tea leaves that contains anti-inflammatory effects and helps the body fend off diseases such as diabetes or cancer.

Moore also shares that drinking tea is now a “routine” integrated into her daily life. She explains that she drinks a cup of tea every day at lunch, and she feels like she “finished [her] lunch only once [she] drinks tea at the end of it.” 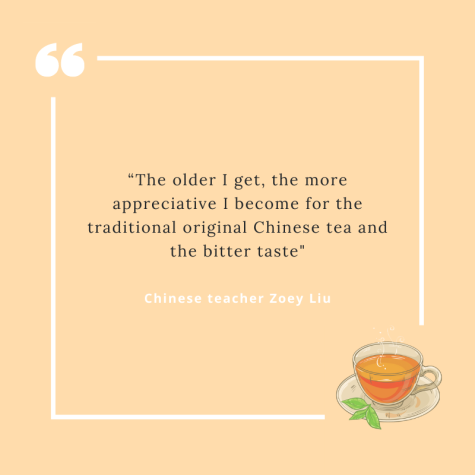 Although Liu “did not have the habit of drinking tea” when she moved to the U.S., she still worked to introduce her students to China’s tea culture, much like how she was introduced to traditional tea by her family when she was young.

“One or two years before [the pandemic], I wanted to get to know my students more, so I came up with the idea of tea time,” Liu said. “I got a Chinese traditional tea set with strong Chinese black tea, and I had students sit down and chat with me about what is going on [for them] in the class or in their lives. That project went on for a year, so I basically [had to] drink tea every day with my students. [So even] during the pandemic, I started drinking more tea at home. For me, the older I get, the more appreciative I become for the traditional original Chinese tea and the bitter taste.”

Every morning, Moore makes herself a cup of coffee, as the effect of the drink’s caffeine helps her stay alert at school, which she says starts to wear off around lunch. Similarly, sophomore Zayd Musa shares that the main reason that he drinks coffee is to garner more energy for school. 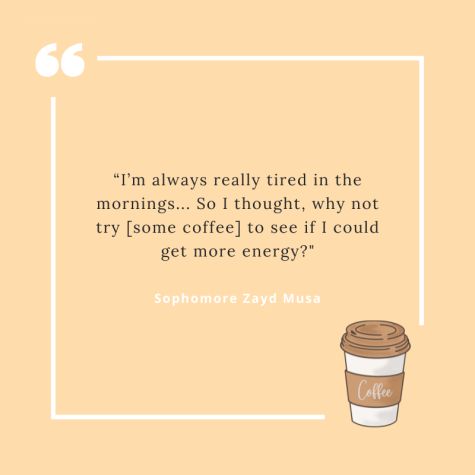 “We have to wake up early, so I’m always really tired in the mornings,” Musa said. “When all of my clubs and classes picked up and there was a lot of work, I decided I was getting really tired too. So I thought, why not try [some coffee] to see if I could get more energy?”

Moore shares that she was first exposed to coffee when she lived in India, adding that she comes from Southern India where “people are more coffee drinkers,” while people from Northern parts are tea drinkers. She articulates that growing up, she started drinking coffee because everybody in her household was making Indian coffee.

Moore explains that she tries to make her coffee healthier by adding a creamer containing medium chain triglycerides, a type of fat that has multiple health benefits such as gut improvement and reduction of body fat.

For Musa, he states that he started drinking coffee at the beginning of the second semester. Currently, Musa’s favorite coffee is cold brew since it “has less bitter flavors,” he can make the coffee himself at home and it can be used to “make a lot of other types of drinks.”

Musa highlights that he initially did not enjoy the taste of coffee due to it being bitter. However, he also explains that as he “started drinking [coffee] more, he started to enjoy it [more].”

“Now I do actually like the flavor of coffee because I got used to the bitter part,” Musa said. “There’s also [various] flavors, different types of roasts and different [add-ins] that you can use, [such as] milk, so I’m more enjoying the flavor [of coffee] now more than I did before.”