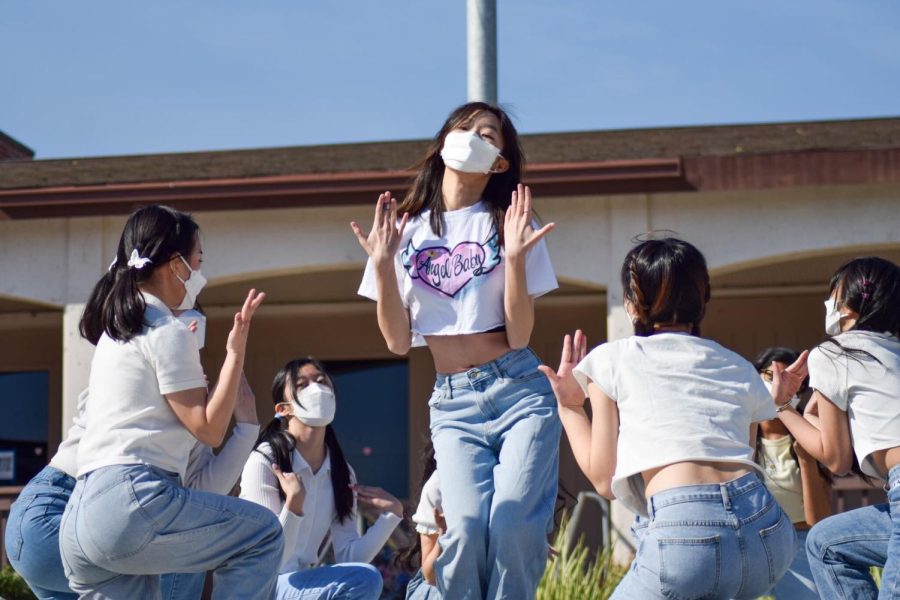 What’s in store for KCDC?

hrough a venture into Indian classical dance in her childhood, senior Parinita Saha’s parents noticed that she had an affinity for music, as her body moved seamlessly with rhythms. Though she was originally uninterested in pursuing dance, the amount of effort she put into learning dance ignited her love for choreographing. Now, as Korean Club’s co-president of dance, Saha continues to refine her techniques and further her passions for dance.

Saha initially joined Korean Club Dance Crew, KCDC, last year during remote learning to participate in several dance covers, though she currently has a decreased interest in K-pop music. Instead, she finds the unique and group-oriented choreography of the genre to be the reason for her interest in KCDC, drawing parallels between KCDC’s freestyle method of learning covers with each other, rather than official classes, and her own journey of training to become a dancer without taking any official curriculum.

“[In KCDC] you have other people [who watch] you, because for [practicing alone], it’s like, ‘Oh, I think I’m doing [this] right,’” Saha said. “But then when someone [in KCDC] calls me out on it, even though I’m the president, I think it’s really important for me to understand that I might not always be right and accept that there are things that other people can correct me for. We’re all different dancers and each dancer can have something that they need more work on, and with each other’s skills we can help each other improve.”

Constrastingly, sophomore and officer Miriam Law took interest in KCDC because of a different reason, citing a previous interest in K-pop YouTube videos and KCDC’s dance opportunities. Law takes dancing inspiration from popular groups such as Stray Kids, finding the energy and precision of choreography to be particularly striking.

Similarly, junior and Dance Committee member Celene He’s previous passion for listening to K-pop led her to Korean Club. To her, K-pop provides a special, unique feeling that other genres fail to bring, being especially attracted by its rhythms.

“As I got to know more about K-pop and look at the dances, I became more interested in it, and as I came to Monta Vista, I was trying to find people who have the same interest as me,” He said. “I feel like KCDC [is] so interesting because I [get] to do the dances I’ve been watching for so long.”

Saha also connects to the unique feelings that K-pop can bring — specifically, the energy, power and complexity of the choreography. Interested in the striking visual and audio aspects of K-pop performances, Saha believes that her personal type of dancing — “hip-hop and energetic” — fits seamlessly into her KCDC performances, allowing her to express herself authentically in choreography.

“I think [it’s] really cool especially how [K-pop groups] perform and how most of it is dancing as a group, because a lot of covers, you can just do it by yourself,” Saha said. “So compared to learning something by yourself, [K-pop] requires more group effort, and I think that collaboration really helps each and every person improve their dancing.”

For Law, she hopes that KCDC will collaborate and perform with other schools in the district. Law finds events where other dance groups can come together to be important opportunities to showcase KCDC’s latest choreography and team collaboration, though preparation and scheduling proves to be challenging.

“Doing a lot of group dances, we have to find time to meet with each other and also practice a lot of things,” Law said. “It’s also [about] getting on the same page with everyone [in the group], knowing what needs to be improved — it’s really just a lot of good communication.”

He sees practice as a fun yet tiring experience, with KCDC’s tight schedule leading to brief preparation periods for projects when further practice and formations for choreography would be preferred. She also finds that the mask requirement for the pandemic to be an issue for recruitment and performances.

“Since we just got back to [being] in-person, it was hard to get people to participate, since many people aren’t comfortable dancing with masks on,” He said. “But it’s still been really fun, like the Random Play Dance last year when we played a song and people who knew the dance would go up [on the stage] and do it. I think the issue right now is we need to try to get as many people as we can to make them participate.”

Saha also stresses the importance of having more students join KCDC. With upcoming events like a collaboration with Cupertino High School’s Korean Club, Saha believes having new members will help the group grow and learn as a whole, as well as better the choreographic experience for everyone.

“There’s a lot of stigma around K-pop fans — there are a lot of hardcore fans, so I understand where that comes from,” Saha said. “There’s a lot of fear, especially if you’re not East Asian, [and] that if you’re not part of that group, then I think a lot of people just assume that you’re a Korea-boo. And I think also, because for me, my goal is to do our covers, it’s not something that I want people to be stressed about. [I don’t want it to be] like, ‘Oh, we have to perform, that’s so stressful.’ It’s more like, ‘Oh, I have other people performing with me, and it’s something that we can learn from and we can enjoy together.’”

To capsulize her years in KCDC into one word, Saha dubs it “rewarding.” The biggest goal of her journey in KCDC has been showing others that her talents aren’t natural-born, but the result of the hard work and effort she has put in, and she aims to continue earning that validation in college and beyond.

“Dance has been a huge part of my life and will continue to be one, and definitely in college, I’m willing to explore more,” Saha said. “It’s something that I’m comfortable in doing because for me, dance, whenever I’m stressed or I have a lot of work or life isn’t really going how I wanted to, [dancing] really helps me let go of everything and just be in the moment and let it all out.”