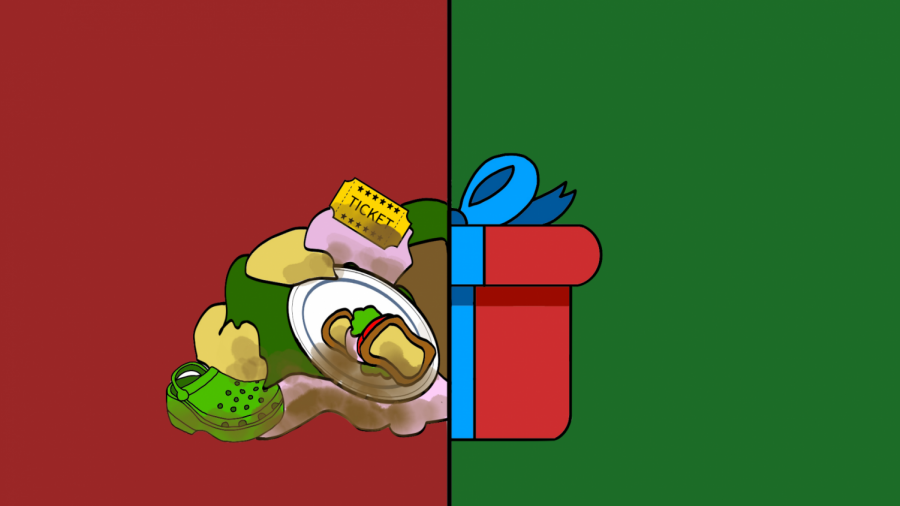 There are both benefits and detriments to the practice of gift exchange.

Gifting during the holiday season

Discussing the positives and negatives of traditional gift giving

Before stacks of brightly wrapped boxes overflowing from underneath family Christmas trees became commonplace, the holiday season — specifically, the days between Christmas and New Year’s Day — was a week for immigrant factory workers to spend late nights drinking and partying in the streets of New York. The establishment of Christmas as a holiday of gift exchange is in part due to the efforts of the New York City elite to trample possible protests for higher wages by the working class. This goal, which gained much traction in the 1800s, coincided with New York City’s emerging middle class’ goal to limit the degree of rapidly growing consumerism that their children were exposed to. As a result, Christmas slowly shifted from a holiday of factory workers drinking late into the night on the streets of New York City to one of families seated around dinner tables laden with decadent feasts.

Modern practices of holiday gift exchange, of course, are hardly reminiscent of the mission to preserve children’s morals — indeed, the problem is precisely the opposite. The practice of exchanging gifts during holidays like Christmas and Valentine’s Day has become so deeply entrenched in a consumerist mindset that the original practice of gift giving has been forgotten altogether, begging the question of whether or not the overall culture of gifts is beneficial or detrimental.

Sparkling ribbons and hefty price tags, despite having overwhelmed the modern definition of gift giving, deviate from the core purpose of the tradition: showing appreciation. Exchanging gifts is valued in innumerable cultures, from the baskets of oranges that represent wealth and fortune exchanged on Chinese New Year to the Diwali gifts that exemplify the companionship central to the festival of lights. Receiving gifts is also a love language, and gifting elaborate handmade items or simple bowls of cut fruit are some of the ways that people articulate their feelings for each other when they are uncomfortable with doing so verbally. Furthermore, gift giving has a positive psychological effect on both the giver and the receiver by making them feel appreciated and strengthening their interpersonal relationships.

The negative aspects of gift giving are eliminated if the practice of exchanging gifts is separated from the desire to partake in consumer culture. The increase in holiday trash could be mitigated by excluding wrapping paper and shopping at thrift stores. The stress that accompanies buying ostentatious, unaffordable designer clothing or electronics could easily be avoided by realizing that it isn’t actually mandatory to buy something new. Indeed, public opinion echoes this sentiment of shifting away from equating gifts to purchasing new items — polls show that 63% of U.S. adults and a survey of 163 MVHS students showed that 49%  prefer experiences, like a ticket to a concert or a day at the beach, over new items as gifts.

Condemning the practice of giving gifts as a whole in the name of consumerism is overlooking the many benefits of showing appreciation for fellow human beings. The mindless consumption of material goods is an issue that plagues every corner of society, and endless Black Friday and Christmas sales only exacerbate this issue. Realizing that giving a gift doesn’t necessarily mean blowing cash on a new item, however, will add depth to a method of gratitude and appreciation as old as humanity itself.

So this holiday season, rather than stressing over the limits of your bank account, opt to consider the aspects of a person that truly make you grateful for them, and make something, buy them a second-hand item or take them on an outing to represent that. Because the true value of gift giving has nothing to do with the price tag and everything to do with how it makes someone feel.

A culture that consists not of giving to people and building them up, but rather stealing from the environment and tearing it down, is not a beneficial culture at all. Americans throw away over 25% more trash during the holiday season than they do during the rest of the year — wrapping paper, rolls of ribbon and stacks of cardboard boxes all accumulate to a massive pile of waste. Thus, it’s inevitable that the constant emphasis placed on giving and receiving gifts will worsen our planet’s environmental crisis. However, gift wrapping is not the only factor that is harming the environment — gift giving promotes the idea of giving items regardless of if the receiver genuinely needs them, increasing the likelihood of these gifts ending up in the trash as well.

An additional issue is people’s choice of gifts. During the holiday season, many people decide to gift pets to their loved ones — because of this trend, the number of pet surrenders peaks prior to and after the holiday season due to people surrendering their old “gifts” to adopt new ones or surrendering their present because they do not have the means to care for it. Either way, animals are treated as objects during the holiday season — their purpose is to provide a few weeks of happiness to the person who receives them as a gift. Once the recipient grows tired of them, they are put up for adoption, and a new pet is adopted the next year and gifted, continuing this cycle of heartbreaking abandonment.

There’s also a pressure to participate in this culture. At MVHS a survey of 152 students showed that 68.4% of students say that there are forms of pressure, internal and external, when it comes to giving or receiving presents during the holidays in order to satisfyingly demonstrate one’s love. Gifts are slowly turning into a way to prove one’s love as they become more socially enforced.

However, love should not have to be proven by objects, especially if these objects are harmful to society and the natural world around us. The current culture surrounding giving and receiving presents during the holiday season is detrimental to people, animals and the planet in general, and should be modified in order to have a lighter emphasis surrounding it to decrease the toxicity of the holiday season.