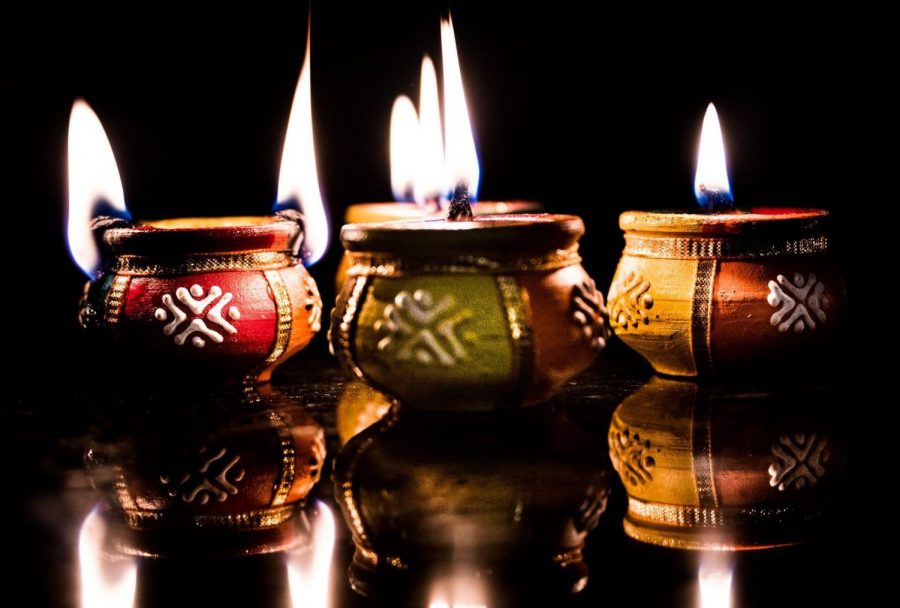 Sushma Bana rests dias in her backyard for Diwali celebrations.

How US and India traditions compare

Reflecting on her 26 years growing up in New Delhi, India, AVID and Physics teacher Sushma Bana remembers Diwali by the decorative lights that illuminated entire communities: a glow that she describes as “visible from the sky.” In the weeks before the holiday in India, she recalls constant reminders of the approaching holiday, an experience that she feels is not present in the Bay Area.

“Here, when you go out in the neighborhood, it doesn’t feel like it’s Diwali because not many homes have lights,” Bana said. “In India, there [was] no way to miss it.”

Senior Arshiya Choudhary, who lived in India for seven years, similarly describes the celebrations in India as “grand” and more community-oriented in comparison to those in the U.S., which she notes include more activities in individual households. Choudhary remembers participating in events during her time in India such as festivals, prayers as well as the lighting of fireworks which she would spend hours hanging up with her neighbors in preparation for the holiday.

For sophomore Raashika Biswari, Diwali was marked by the routine flight from her former home of Bangalore to North India, where she celebrated every year with her extended family. Students had the week off of school because Diwali is a national Holiday in India, and Biswari spent it in a “celebratory mood,” staying up until midnight each night and watching fireworks with her cousins.

After moving to the U.S., Biswari’s experience of the week-long Diwali celebrations in India changed. Instead of the large celebrations held within the gated community she used to live in, Raashika began attending individual parties scattered throughout the month. Her experience was also affected by not having time off school in the U.S.

“Activities stay the same, but they feel different,” Biswari said. “In India you typically have a lot of people doing the same things, [so] there’s a larger sense of commu

nity over there. Over here, you will find some people that do [celebrate in a certain way, and] some that don’t.”

Despite the differences between the U.S. and India, one aspect of Diwali that Bana notes has remained constant throughout her life is the holiday’s religious significance. She describes Diwali as a “cleansing of the body, soul and mind” and uses it as an opportunity to reflect on her habits to find what she can improve, while focusing on the central meaning of the holiday: “enlightenment, knowledge [and] kindness.”

Choudhary also views Diwali as a reminder of her cultural identity and values, which her family marks by reciting the story behind the holiday every year. While many of the traditions that surround Diwali have stayed the same through her move, she reminisces on the personal importance the holiday held for her in India.

“There’s acknowledgement, but there’s not that sort of deep bond you have with people and you don’t sit down for hours and just talk to them,” Choudhary said. “It’s sort of just a passing moment like, ‘Oh, Happy Diwali,’ and that’s it. I still value it a lot, but I think the importance in my life unfortunately has.”

Bana compares her celebrations of Diwali in India to “spring cleaning,” describing how families would replace old items, buy new products and exchange gifts during the holiday. Bana highlights how the “simplicity” of Diwali that she remembers from her childhood in India has been lost in the commercialization of the holiday, comparing the consumerism that takes place during Diwali India to Black Friday in the U.S.

“The commercial aspect of Diwali has really exploded and corporate culture has embraced Diwali like anything,” Bana said. “Earlier it wasn’t to that level when I was growing up. Instead of that, just check on people, be nice to them, spend time with family and community. Diwali is about self reflection. Look at your community, how you can be helpful, and keep that flame burning inside you and in your community of goodness and kindness.”