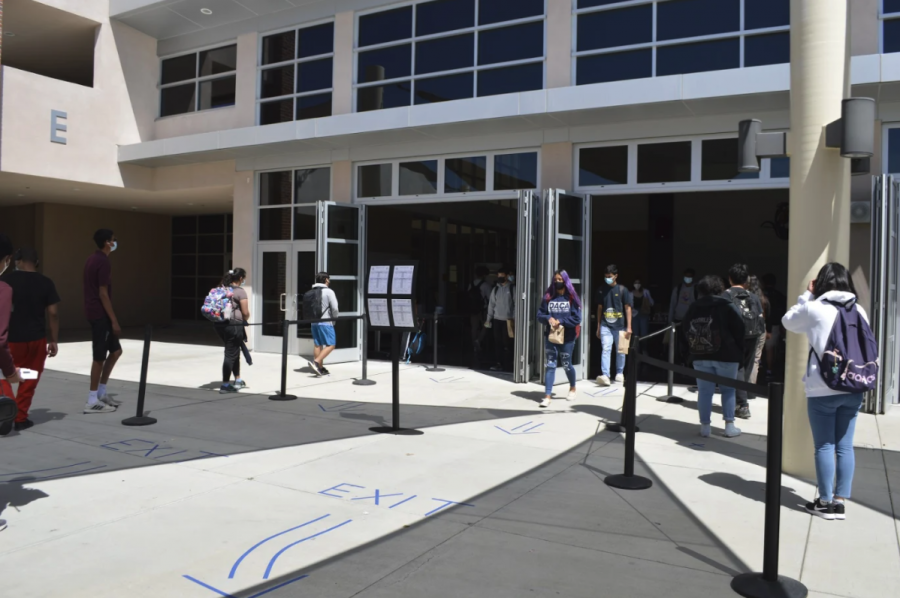 Students at MVHS pick up their lunch while maintaining social distancing protocols. Tape has been placed at six feet intervals to keep students safe.

The logistics behind hybrid-learning in FUHSD

Exploring the decision making involved with bringing students back to school

On Tuesday, March 9, FUHSD sent an email to all students and parents in the district announcing the new option of hybrid learning, which would begin April 19. Later in a more detailed email, the district informed the community that students would be able to choose how they wanted to spend the rest of their school year.

Each student, in coordination with their parents or guardians, had three options. Students could stay remote for the rest of the 2020-21 school year, stay remote for academics while coming on campus for extracurricular activities or return to school for hybrid instruction; choosing between two or four days a week in-person.

I think that the thought was that in person learning is really what schools are designed to do. And we went through this remote learning as a way of safety. But as conditions improved, and safety improved, that there was a way that we could bring back students in person.”

While students were notified of this option in March, the concept of hybrid learning was introduced to the district in November of 2020, according to district superintendent Graham Clark. Clark explains that there were a select number of students, mostly those receiving special education services, who were brought back to campus for instruction in order to meet the needs of their Individualized Education Plans. After Santa Clara County was moved from the Purple tier down to the Red tier, FUHSD thought it feasible to bring more students back as well.

“I think that the thought was that in person learning is really what schools are designed to do,” Clark said. “And we went through this remote learning as a way of safety. But as conditions improved, and safety improved, that there was a way that we could bring back students in person. Also, we were getting a lot of encouragement from the state and also from the county that it is now time to restart.”

One form of this encouragement may have been the incentive of funding promised by California Governor Gavin Newsom. Newsom had previously stated that if a school was to reopen in California, it would receive a grant from the government in order to safely make the transition. Associate Superintendent of Teaching and Learning Tom Avvakumovits echoes this idea of a push from the government for hybrid learning.

“The state made it very clear through their communications that it’s time to get people back to school, those that were working from home, students and staff alike,” Avvakumovits said. “However, the state also made it clear we must give an option for students to continue to be in the remote environment. What we could not do is say everyone needs to come back, [because] if we wanted 100% of MVHS to come back, we would not be in compliance with the health department. So we decided upon hybrid learning.”

In order to successfully reopen, the district needed to make a plan for how hybrid learning would work, which involved different aspects such as helping staff secure vaccinations and updating air filtration systems. For communications coordinator Rachel Zlotziver, encouraging staff vaccination was an important first step.

“So we did support our staff and make those [vaccination] appointments when they became available at the end of February,” Zlotziver said. “[We were] trying to make sure that everyone who wanted the vaccine was able to get one, [and] I think that made staff feel a lot more comfortable coming back.”

Since vaccinations are related to a person’s medical record, the district can not officially ask teachers to share if they have been vaccinated, making vaccinations more of a personal choice rather than a prerequisite to teaching in a hybrid format.

Another major obstacle that FUHSD had to overcome was making sure everyone could be safe while they were on campus. This was done by outlining specific rules and regulations for both students and staff to comply with in a “Reopening Student Handbook.”  Pathways and staircases on campus were made one-way to control traffic between class periods and face coverings are required at all times while students are in school, besides while eating during brunch and lunch. Contrary to a regular school year, MVHS is closed-campus while in hybrid learning, meaning that students are not allowed to leave campus during breaks or free periods, which also means the school provides free brunch and lunch options.

Avvakumovits and Clark both noticed that the CDC guidelines were changing frequently, but currently, MVHS has desks six feet away from each other, with students and adults also always having to fully distance themselves at all times. Originally, FUHSD had planned to have four and a half feet, which was changed after the number of students returning was confirmed.

“I am not one that’s going to say that hybrid instruction is better than what we were doing before in terms of instruction,” Avvakumovits said. “What I will say is that hybrid is better than remote is. Allowing students to be on campus has a lot of benefits that may not manifest themselves on how well you do on an algebra two trig exam. The opportunity to interact face to face, that’s what is really, really important.”

One of the last challenges that FUHSD faced while setting up hybrid learning at all campuses was too many students using the WiFi at the same time. The basic school bandwidth that students use in a regular school year now had to account for over a 100 people, including staff, being on Zoom at the same time. According to Clark, in order to fix this issue, the district spent a considerable amount of money upgrading all of FUHSD’s WiFi, placing a network access point in every classroom in every school in the district. After a period of testing, Clark now feels that the network is strong enough to support a multitude of simultaneous Zoom users.

Zlotziver and Avvakumovits both feel as though staying in remote instruction for an extended period of time is unhealthy for students and that hybrid is a good temporary solution. Additionally, Clark hopes that all students in the district are able to be vaccinated by August in order to safely reopen schools again.

“What we’ve heard anecdotally from students is that just having that routine back, getting dressed in the morning, you know, being able to wave to friends to eat lunch, I mean, I’ve seen the photos, kids out there eating at lunch, and they look happy, and they look excited to see each other,” Zlotziver said. “So I think it has to be a good thing for most of our students to have that interaction. Again, to see their teachers, some of our students who have never set foot on a high school campus, I think it probably has to be positive in that way.”