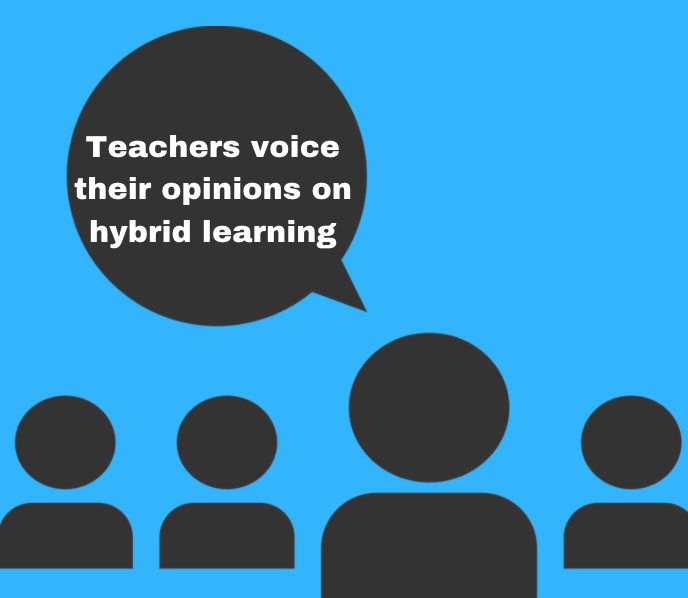 Three teachers give their thoughts on the transition to hybrid learning.

Exploring the perspective of teachers on hybrid learning

As conditions in California with COVID-19 continued to improve, MVHS transitioned to hybrid learning as of April 19. Most students remain at home, but some students chose to go to school in person either two days or four days each week.

English and AVID teacher Monica Jariwala describes expecting it would take some time to acclimate herself to the new learning model, get used to the new technology in classes and get into the rhythm of teaching both the students at home and those in person.

“I was just expecting it to be a little bit more challenging,” Jariwala said. “But it’s been good. Just seeing people in person, I think it’s really motivating to come to school to see colleagues and see some students. I can’t complain.”

However, Jariwala has faced some challenges with hybrid learning. For instance, her students in person are more active in discussions, but she encourages the same level of discussion from those who are remote.

“I always make sure that, for those that are on Zoom, I crank the volume up on my laptop so that those in person can hear what the those at home are saying,” Jariwala said. “And then obviously, those on Zoom can’t hear what’s happening in the classroom. So I usually will repeat it, or I’ll just type what the students in the class are saying into the chat. At least everyone can hear what everyone [else] is saying. So I’m really trying to make it pretty equal. But I will say that I do probably talk more with those that are in person because they’re in person. It just makes more sense.”

Like Jariwala, science teacher Kyle Jones has found the transition to hybrid learning relatively uncomplicated. Still, he believes the internet and computer setup at home is “far superior” to the technology he has at school.

“My main hurdle has been connectivity — I get disconnected from Zoom a lot more when I’m on campus,” Jones said. “I also don’t have more than one monitor at school, so the screen real estate makes it hard to manage windows, tabs and Zoom features. So things have slowed down a little bit. But other than that, I think it’s been relatively straightforward.”

Math teacher Martin Jennings has found that with hybrid learning, he has spent less time on some course material, yet still manages to fit most of the curriculum into his courses. Jennings prefers fully remote teaching because of the simplicity of not teaching to two sets of students.

“It’s just easier to deal with one and have everybody be online or everybody be in school,” Jennings said. “Having both makes it more challenging. You have to accommodate both groups, and you have to wear a mask when students are present. The expectation is you’re going to wear a mask.”

Teaching in class has not been the same for Jennings, who must also keep the doors open due to COVID-19 precautions — this lets in noise from the construction going on around campus, which Jennings shares as an additional inconvenience of having to teach in person. Even with the challenges, Jennings feels that the school is doing well at keeping students and teachers safe from COVID-19.

“I think that they’ve made a lot of efforts to focus on the way the virus is transmitted, and that’s aerosolization,” Jennings said. “So they’re making an effort to have students stay socially distant, and they’re making sure that the filtration systems are top-notch. So yes, I do [feel that teaching at school is safe].”

To deal with technological challenges, Jennings has made sure to plan ahead to ensure his classes stay on track.

“Well, if the internet works, I’m usually pretty good, I’m OK and get by,” Jennings said. “But if the internet’s not working well, we just live to fight another day. So one of the things that I’ve tried to do is kind of be on top of the schedule, be proactive. So that in case of a hiccup arises, I’ll at least be on track.”

If it were up to him, Jennings says that he would keep school completely remote until next school year, as he feels that distance learning at MVHS has worked well because most students have access to technology. He thinks that teachers did have a voice in the decision to transition, but not a large one.

“I don’t know that the teachers really felt like it needed to be a loud voice because we didn’t have all the information the district had,” Jennings said. “They’re the ones that deal with parents. They’re the ones that know the budgeting numbers and what it takes to open. So I trust that they made the best decision.”

Jones believes students who need a school environment to focus or who don’t have access to sufficient technology at home would benefit from hybrid learning. However, besides those circumstances, Jones does not see many benefits to this learning style, aside from occasionally being able to greet students on campus.

Jennings feels hybrid learning is necessary for certain students to participate in school. He describes a specific example where a student felt vastly different in person with the hybrid learning model rather than remote learning.

“I think some kids need this, and I already know one kid in particular, who said that they were so happy to be back at school, and they found it much easier to concentrate in person than at home,” Jennings said. “All they did at home was sit in front of the computer [with] their video on but [they] did nothing, zero, no note-taking, probably no listening. I think for some kids, [being in person is] very important, and for others, it’s not.” 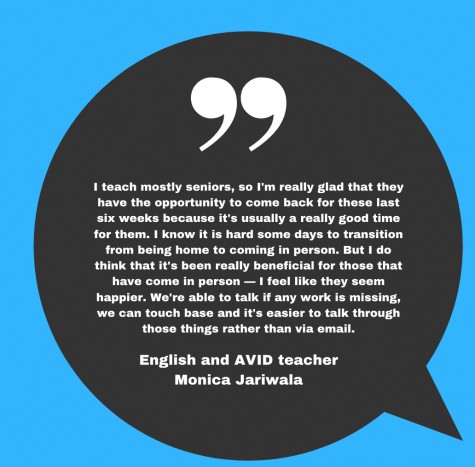 Jariwala believes that the transition has been an overall net positive. She thinks that the district did what it felt was best and also appreciates that the school was opened up at the end of the year to allow seniors to come back to campus for a final time.

“I teach mostly seniors, so I’m really glad that they have the opportunity to come back for these last six weeks because it’s usually a really good time for them,” Jariwala said. “I know it is hard some days to transition from being home to coming in person. But I do think that it’s been really beneficial for those that have come in person — I feel like they seem happier. We’re able to talk if any work is missing, we can touch base and it’s easier to talk through those things rather than via email.”

Jones hopes that, after the pandemic, distance learning can still play a part in school in the future. He believes there might be cases where both in-person and online works well. For the past few years, he’s been streaming his office hours online and thinks that other teachers can implement more technology into their teaching.

Jennings is retiring at the end of the year and describes the last year as having been uncharted territory for him, along with other teachers. Jennings believes that everyone can take away the positives from hybrid learning, as it prepares us for the future if needs arise.

“I don’t know what next year is going to look like, [but] I don’t see how they can get away with not having an online component,” Jennings said. “All the students in FUHSD maybe can sign up for some online courses, and they’ll offer it only to those students, and those students would have a limited choice of classes that they would take, and then they would have plucked some teachers who want to be online only teachers and have them teach those students.”