After students turn in their course selection forms in February, the scheduling assistant principal (SAP) at each school works with the departments and Crutchfield at the district level to develop a master schedule. The SAP at MVHS, Michael Martinez, then predicts the course enrollment on the 40th day of school for the next school year, one week after the first progress report is issued. This is because students often drop classes during the first few weeks of school and near the first progress report.

“Based upon March 24, what did the last three years show how many kids dropped calculus before the 40th day?’” Crutchfield said. “Well, it shows 19 [students] dropped. Then I better have 19 more [students] than I need, so if they drop, we’re going to hit our mark. You can imagine how difficult that is — we call it trying to guess the behaviors of 10,000 teenagers.” 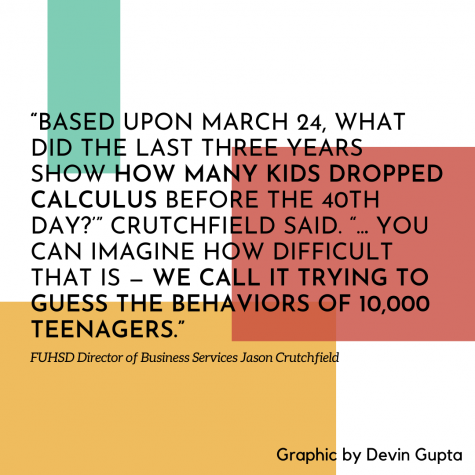 Class size or teacher to student ratios, which are determined through negotiations with the FEA, determine how many sections of each class will be offered. According to Bonnie Belshe, FEA Site President for MVHS, this is outlined in the Collective Bargaining Agreement (CBA), which sets workplace conditions. It also defines safeguards like the minimum and maximum number of students per class.

The CBA allows for some flexibility with understaffing and overstaffing. For instance, fully tenured teachers are currently given a full-time job regardless of declining enrollment, though it may not be at their current school site. Additionally, the district administration checks whether schools can share a teacher through a split assignment or if teachers can teach another subject or take on another role at their own site.

If there are extra sections in a department when all teachers are working full-time (five classes per teacher), department leads like Belshe, who leads the Social Studies department, scouts for other teachers in the district to pick up the extra section at MVHS. This year, history teachers Robbie Hoffman and David Hartford are both teaching six classes with increased salaries since there were two extra sections of U.S. History.

In contrast, when the formula generates a decimal number of sections or results in a section with too few students, the schedulers try to round down, minimizing the number of sections. Crutchfield says that “people don’t realize that [creating sections] adds up to millions and millions and millions of dollars a year,” given that each costs $25,000 to $35,000. If each school in the district adds one extra section to the master schedule, the costs come close to $1.5 million.

“If we offer nine sections of Algebra 1 and we only need eight, I’m going to tell [the math department], ‘You have to close one of those classes and redistribute those kids and change all their schedules,’” Crutchfield said. “It’s miserable work. No one wants to go to a parent and a bunch of students in the fourth week [of school] and say, ‘Hey, we’re rearranging your entire schedule and changing your classes, so you can go to a bigger class.’ But that’s $30,000 so we force ourselves to do it.”

Once each department has a target number of sections, schedulers look at specific course signups by working in Infinite Campus, and department leads narrow the department section allocation to specific course allocations. According to Crutchfield, MVHS frequently faces over enrollment for the following school year and loses 30-40 freshmen in the fall who move elsewhere. SAPs accommodate this particularly in math, science and modern language classes, the three areas with the largest amount of drops during the school year. 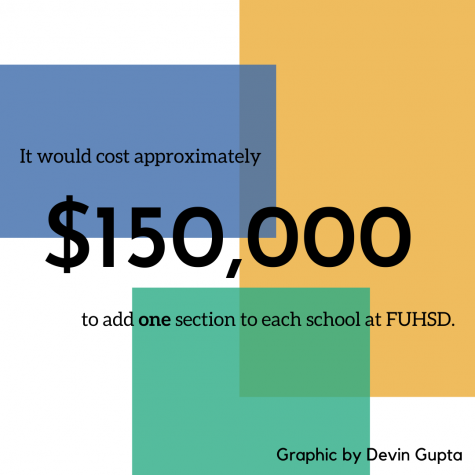 Generally, after dividing enrollment by target section allocation, each student at MVHS is allocated 6.13 classes, with fluctuations across grade levels. According to Crutchfield, it would cost the district five to 10 million dollars annually if all students got all seven choices on their course selection forms. Instead, the seventh period helps students make up for failed classes to graduate in time and make room for English Learner (EL) students who are required to take extra classes. The entire process only targets general fund classes, paid for by property taxes; sheltered EL classes are not involved. Crutchfield says to “think of it as seven opportunities to take six classes.”

With this flexibility at the micro level, schedulers prioritize placing singleton and doubleton classes — where there is only one or two periods for that specific course — and fixed period classes such as American Studies, World Studies and sheltered classes. According to Belshe, schedulers have to navigate specific student constraints such as a student taking the AP level of a foreign language and Journalism, both of which are singleton classes that are only available in a specific period.

“The doubleton, singleton day, [is] actually one of my favorite days of the whole process, because it is so focused on the students and getting students the maximum access to what are very specialized courses,” Belshe said. “[We consider] how can we create this puzzle to put these pieces together to give [students] the most access to take all [the classes] that they have signed up for.”

Crutchfield, who was previously a SAP, says that he always reminded students that “you won’t get every class you want every year. It just doesn’t work that way. But you will get it [eventually].” He emphasizes that popular classes like Engineering may take a couple years before a student can successfully get it in their schedule since courses in the seventh choice on the course selection form are not guaranteed.

“You’ll get to college and realize how much easier it is in high school to get the courses you want,” Crutchfield said.

Even at the high school level, scheduling conflicts don’t work out for every student, according to Clausnitzer.

“[If] we’ve got one student who has [two conflicting singleton classes], we have to go talk to this student and tell them that [they] can’t take two classes during one period and they’re going to have to make a choice,” Clausnitzer said. “That’s the most complicated part of [course selection].” – Principal Ben Clausnitzer

In the past, FUHSD has made some changes to the process. They’ve taken students in sheltered classes out of the general class ratios, decreased freshman math class ratios from 32.5 to 23 students per class, decreased music class size ratios from 40 to 36 and guaranteed every school 10 sections of music. Every three years, FEA and FUHSD have the opportunity to negotiate a new contract but don’t change ratios due to the hefty costs involved. However, Crutchfield foresees that the district may be overstaffed enough next year that the teachers will agree to a temporary ratio reduction.