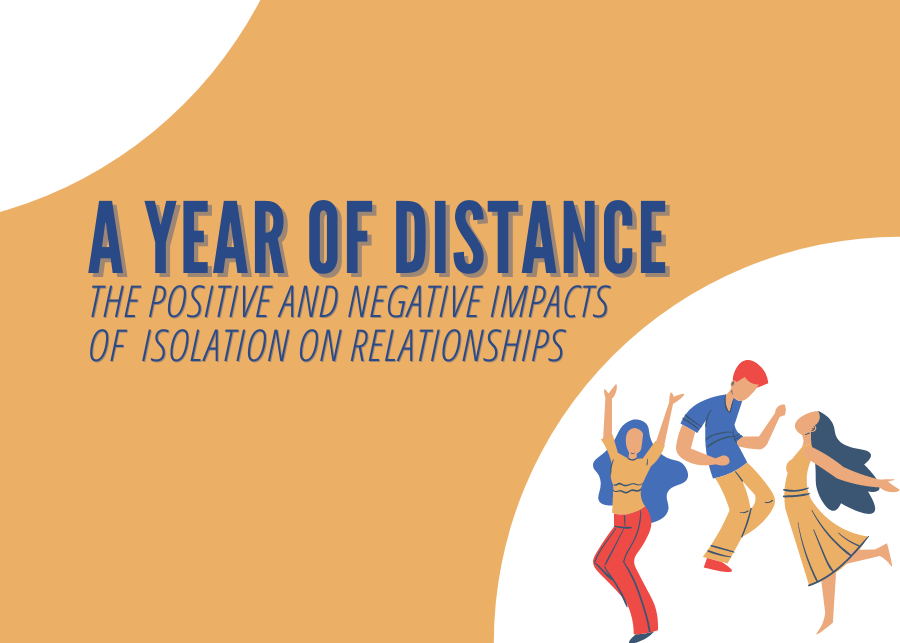 A Year of Distance

The positive and negative impacts of isolation on relationships

English naturalist Charles Darwin recorded a famous anecdote in which he uses differences in the physiology of finches found on the various islands of the Galapagos as evidence for his theory on geographical distribution. Darwin surmised that the finches on the islands once shared a common ancestor, but evolved to have advantageous features for their varying environments.

From a slightly less scientifically groundbreaking point of view, I think that Darwin’s observations can be applied, in some aspects, to human social interactions. In this seemingly never-ending quarantine, I’ve concluded that contrary to popular belief, social isolation helps create stronger bonds with others precisely because of, and not despite, the difficulty to keep in touch with others. Humans are socially adaptable to their environment, and even in our current state of pseudo-isolation, we can strive for and achieve more meaningful relationships.

Since quarantine was thrust upon us last March, we’ve all more or less divorced from our pre-quarantine rituals when it comes to social interaction. No longer do the days consist of trudging from period to period through a dismal campus for eight hours and then going home to finish schoolwork for three. Thus, the people who we would inevitably bump into while beelining from class to break, and then back to class, have long since fallen off of our post in-person learning radars.

I’ve specifically come to the realization that many of whom I interacted with were just victims of proximity. My classmates asked me about my day, asked what homework we had for chemistry, and that concluded our weekly student-student conference. What’s more, even the people I would spend time with during break and outside of school have drifted away from my sphere of influence — they too were people I only spent time with because it was the most convenient thing to do. I would eat lunch with them or join group chats with them purely because they were the most available within my daily life.

However, since I’ve entered quarantine and no longer enjoy the luxury of having school as a central social hub for people my age, where it’s easy to just settle for friends that are plentiful and available, it’s dawned on me that school confines our social life largely to those who attend the same campus and are in the same environment as us, and leads us to overlook those who do not.

For me, isolation has helped cultivate more meaningful relationships by forcing me to realize who from my pre-COVID daily life actually brings me more enjoyment, and isn’t just there because of convenience or proximity. For example, one of my current closest friends was somebody I spent time with before quarantine. I feel we’ve grown closer over remote learning since we actually interact more frequently as we’ve slowly grown distant from other members of our pre-quarantine group. Additionally, quarantine has stripped us of both the setting and the need to discuss academic subjects, given that we attend class from home, and that generally both of our workloads seem to have lessened during remote learning. This means that we can spend our time talking about more meaningful and personal topics rather than the usual exam or homework discussion that dominates the radio waves during in-person learning.

Quarantine has also helped me discover new communities and individuals outside of school. I’m interested in video editing and was able to find a friend online who recently started streaming on Twitch seriously, and through this connection, I was able to assist him and further my pursuit of improving my editing skills by editing stream highlights for him. I was also able to find a community of like-minded individuals who have shared interests, and whom I would likely keep in touch with far longer than those who I spent time with before quarantine. I can say with a fair amount of certainty that this wouldn’t have been possible if I were stuck attending school for eight hours a day, or if I weren’t forced to narrow my list of friends down — quarantine gave me the push I needed to reassess my pre-quarantine relationships and strengthen the ones that I saw as the most meaningful.

This doesn’t all happen overnight, however. I learned that in order to really start cultivating more meaningful connections, I needed to seek them out myself. Quarantine gave my social life a relatively clean slate and put me in a position to discover new communities and strengthen bonds with people I was already close with. Even so, I had to go out of my way to make sure I stayed connected with the people who I chose, and I had to reach out and integrate myself in these new communities. At the end of the day, if I didn’t put in effort to better my social life, I would really just be isolated with no silver lining. Quarantine provided me an opportunity to create stronger connections with those around me, but I had to make the most of that opportunity.

And so, the finches from Darwin’s observations aren’t actually at an inherent disadvantage due to their circumstances. In fact, their adaptations to their circumstances, even if developed by chance mutations, allow them to thrive in their new environments. Humans are the same way — we aren’t rigid, static nodes that are only capable of functioning socially under set conditions. Our social resilience allows us to change, oftentimes more successfully than marooned songbirds, to suit most settings, and improve upon the norms of interaction we followed in our past social lives.