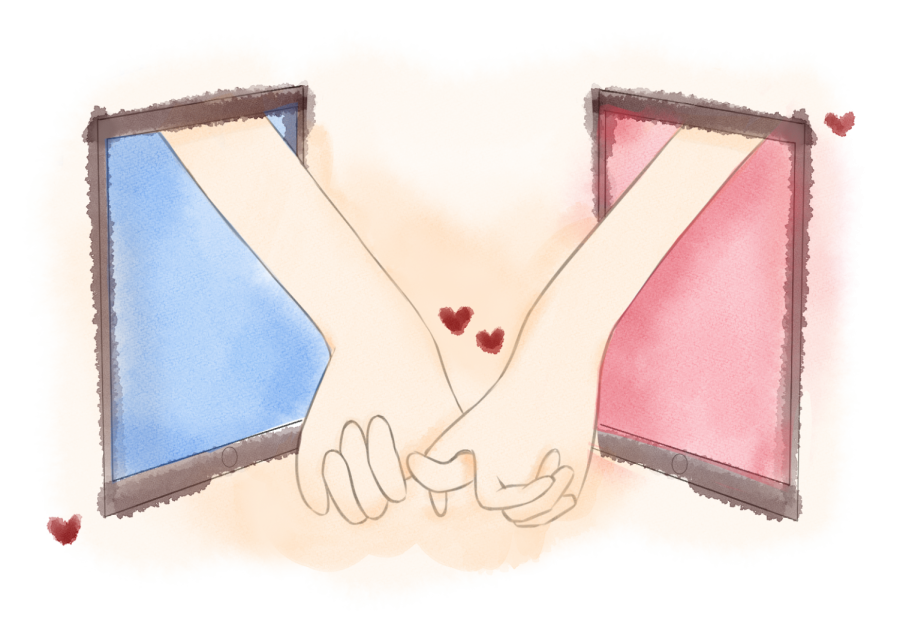 When senior Pearl Raina and her boyfriend, senior Ashwin Desai, entered the new year of 2020, they were expecting a year full of typical high school dating experiences — going on dates to the movie theaters, eating at restaurants and dancing at prom. What they weren’t expecting: a pandemic and multiple shelter-in-place orders that required everyone to stay at home for almost a full year.

While Raina and Desai were fortunate to have had started their relationship months before the pandemic hit, for those who started relationships right before or during quarantine, adjusting to dating in a virtual setting can be difficult — especially when added on top of online school, extracurriculars and, for seniors, college applications.

Senior Sammy Banerjee, who started dating senior Bianca Young a couple of months into quarantine, shares that the pandemic has made many aspects of dating more difficult. For example, there are more restrictions as a result of shelter-in-place orders that detract from the normal dating experience during the beginning of a relationship.

“In the beginning, it was very weird,” Banerjee said. “Everything was so new. I was like, ‘How am I even able to be in a relationship when I’m supposed to be six feet apart?’ It’s just something about being there physically that you can never take away.”

Additionally, Banerjee has found that he’s begun to change his online social habits in order to adapt to limited in-person interactions.

“Virtual dates are definitely a thing and honestly, before [the pandemic], I wouldn’t really FaceTime people like that,” Banerjee said. “But nowadays, people set up schedules to make calls and to make time for people. And I was definitely not doing that before.”

Raina empathizes with new couples, as she believes trying to date while being physically disconnected can make the first few months of dating extremely difficult. In her experience, getting to know each other in-person is especially important when trying to gain a true understanding of one’s partner.

“I feel like quarantine is the first step into [having] a long-distance relationship — it’s almost the same thing,” Raina said. “I do really feel for new couples; it is really, really hard when you’re first starting out because physical presence is really important [since] that person is usually different [in-person than the person you get used to online]. You get confused on what their, and your own, actual personality is.” 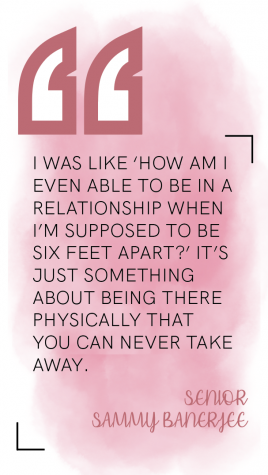 For Raina, having a well-established relationship and an even stronger foundation of friendship with Desai since middle school made transitioning into quarantine much easier than relatively new couples.

“[Desai] and I are definitely lucky because we’ve been dating for so long,” Raina said. “It’s really hard for new couples because

they don’t even understand each other yet [and] how they feel, [in addition to] not seeing each other for so long.”

Similarly, senior Kelli Kosakura, who has been dating senior Matthew Whong for more than two years, also notes that quarantine has had little to no effect on their relationship. She believes this is because of their strong understanding of each other as people and partners in a relationship.

“Having that foundation earlier on was good for us because now, [even] with all these restrictions, we don’t feel super trapped,” Kosakura said. “Honestly, we probably texted more when we were freshmen and sophomore[s] because that was when it was new, but now I think we found our groove.”

Raina attributes her relationship’s success in transitioning into quarantine to her and Desai’s familiarity with each others’ love languages, which helped strengthen their communication and understanding of one another during the pandemic.

“What ended up working out for both of us is our [love] language, [which] is quality time,” Raina said. “We FaceTime every day, and it’s not [always] about conversation, it’s [also about just being present]. Sometimes he’s just there and we’re both just [focusing on doing] our work and that’s it.”

Raina, Banerjee and Kosakura all agree that knowing how to communicate effectively has been especially key in their relationships during this time. Banerjee adds that quarantine has, in a way, created a situation in which they had to become better communicators with each other.

“A lot of people get into a habit of just [asking] informational [questions],” Banerjee said. “Like, ‘Oh, how was your day? What did you do? I did XYZ.’ But honestly just [trying to] figure out how they’re feeling, what they’re feeling, more of the below-the-surface [content] helps a lot [in relationships].”

Even with the many restrictions put in place, Banerjee notes that there have been some benefits to dating in quarantine. His flexible class schedule, along with less time-consuming extracurriculars, allow Banerjee to focus more time on his relationship. 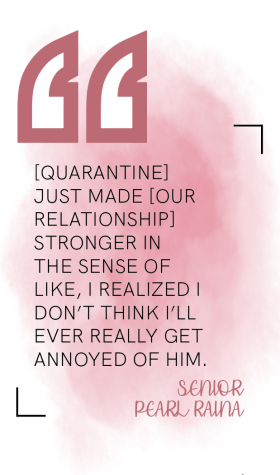 “I think it is easier to date someone now, just because I have a lot more free time to do what I want to do,” Banerjee said. “[Pre-COVID-19], I was in school for eight hours, and sometimes I had track practice so I [ended] up being home and doing things that I [wanted] to do for a limited amount of time. And [since] the class periods are really nice now, I am able to spend some good quality time [with Young] nowadays.”

Banerjee also says that being in a relationship has helped him stay socially connected and encouraged them to do fun things together during this time, which he believes can be distant and draining at times.

“[There’s] a lot of [typical] date [activities] you can’t do [anymore],” Banerjee said. “But it’s also making us more creative. Just exploring nature [and doing] things that don’t involve too many people [makes you] focus on that one person and not really worry about other stuff.”

Although quarantine hasn’t had much of an impact on Raina’s relationship, she does notice that it has given her more insight into her connection with Desai.

“Each part of quarantine kind of taught me something about our relationship, [such as] communication patterns [because] virtually — that’s really different,” Raina said. “[Quarantine] just made [our relationship] stronger in the sense of like, I realized I don’t think I’ll ever really get annoyed of him.”

Kosakura believes the distance and isolation of quarantine have actually helped her become more independent and prompted her to strengthen her friendships.

“Quarantine has encouraged me to reach out to my friends that I kind of took for granted in person,” Kosakura said. “[It’s] helped me [to] not be so reliant on [Whong] and always talking to him, but to encourage me to reach out to [people] I haven’t seen in a long time.”

While quarantine has changed many aspects of the dating scene, Banerjee notes that the feelings of excitement are still there, and he is grateful for the positivity his relationship has brought to his life.

“Adding a relationship to [schoolwork, extracurriculars and college applications] doesn’t always help, but I think it was very motivating,” Banerjee said. “It just shows you that another person cares about you just as much as you do and is willing to support you through thick and thin… which is very validating honestly. And yeah, [it] helps you wake up every day — there’s a thin layer of happiness over everything.”