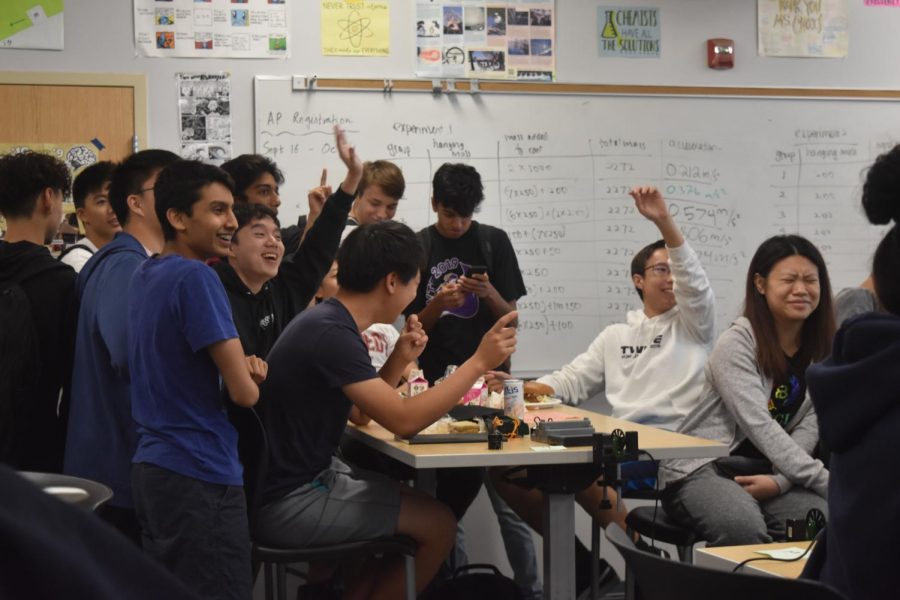 or members in MVHS Korean Club, their experiences during the school year of 2020-21 are significantly different compared to previous years. Instead of performing at homecoming rallies and skits through its subgroup, the Korean Club Dance Crew (KCDC), and holding in-person meetings with food, the club now posts its dances on YouTube and delivers Korean skincare products, snacks and other prizes to winners for participation during club Zoom meetings.

“We’re trying to organize more interesting activities like Kahoots, trivia and breakout room activities where people can really get to meet other members and network with one another so that our club has a unified atmosphere,” Korean Club president and senior Natalie Zhou said. “[Connection] factors in with not only culture meetings but dance too, because we can’t have dance performances anymore. A lot of our dance members were really looking forward to dancing with others and showcasing in front of other people.”

Assistant Principal Mike White says that the large number of clubs that are still active like Korean Club is surprising, having seen club membership continue to decline over the course of the COVID-19 pandemic. He’s found that it’s becoming harder for clubs in general to retain members, despite giving their best efforts to continue meetings and activities.

“Reaching out to the freshmen about club information has been more difficult,” White said. “[We were] no in-person contact and all about trying to get virtual. So membership has been impacted with most of our freshmen, and there are just clubs that just couldn’t adapt to [the pandemic], and whatever their club was doing didn’t work in the virtual environment. They’ve gone inactive like a lot of our sports clubs and there’s nothing they could do. That’s sad to see, but they’ll come back.”

Zhou finds that the most difficult part of continuing Korean Club is the lack of motivation found when staring at a computer screen for club meetings. A key part of keeping members motivated was real-life connection — the interactive aspect of being able to meet people, talk to friends and eat lunch together during K-pop dance practices.

White believes that this shift in clubs was inevitable, stating that the only logical course of action was to be more lenient, such as giving clubs the option to suspend activities.

“To the people who can adapt their activity, like the gaming clubs, it’s not a problem,” White said. “They’re playing just fine. They’re just not doing it in the Student Union as a group anymore, but they could adapt the activity and the virtual world is doing fine. They’re moving on. Red Cross Club, a little more difficult. How do you have a blood drive virtually? You can’t. So they’re trying to give out information, but [they can’t do] some of the things that they would have done.”

How do you have a blood drive virtually? You can’t. So they’re trying to give out information, but [they can’t do] some of the things that they would have done.”

Sophomore and club commissioner Rohit Dayanand acknowledges that it has been hard for some clubs to adapt, so Leadership changed the strike policy that mandated turning in meeting minutes and regular meetings. Instead of being disbanded for failing to meet these standards, clubs could notify leadership and keep their active statuses and resume activity once the pandemic ends.

“We waived the meeting requests because we understood that a lot of clubs, especially smaller clubs, depend upon things like Club Info Day, which did happen [this year] but to a limited extent because not a lot of people were comfortable with online clubs,” Dayanand said. “We understood that a lot of the things that clubs do depend upon some level of in-person interactivity; although a lot of other clubs have managed to pivot, it takes time to do so.”

Clubs have also been losing advisors, and according to White, this is due to teachers’ busy schedules and Zoom fatigue. He says that overseeing club meetings on Wednesdays while doing the work that comes with adapting teaching methods and committing time to Zoom meetings is not sustainable for teachers.

“It’s not selfish — it’s just looking out for their best interest in terms of their own personal health [since] one can only Zoom so much,” White said. “There was a cynical side where a lot of people were saying it’s because they’re not getting any benefit from it, because they’re not getting any supervision really, and I don’t think that’s the reason they dropped the majority of them [and] decided not to do it. They just did it for their own personal sanity.”

White predicts that there will be a dip in the number of clubs even after the pandemic ends. He speculates that a key problem may be that suspended clubs will lose their senior officers after graduation with no one left to secure leadership and continue the club’s activity.

Zhou hopes that Korean Club will be able to reinstate the previous club environment with monthly classroom meetings including Korean snacks and food. She hopes Korean club will be able to further promote the club with weekly KCDC practices, dancing classes and performance opportunities for new club members.

“It was really hard for us to market our club to a wide audience,” Zhou said. “A lot of the incentive that we had before was food, and since that’s not an option anymore, it was hard for us to keep interest within the club. So, next year, and the years after [when] we go back, we’re definitely going to have to focus on marketing and promoting our club more.”

Ultimately, White finds inspiration in the efforts students have made to transition and continue clubs during the COVID-19 pandemic. Despite hardships, students continue to collaborate and commit to clubs, and White hopes this trend continues.

“I’m just amazed at what people are able to do,” White said. “I think students have adapted and tried to do their best and kept [clubs] going. I’m proud that students are out there doing it because it is a social outlet, and it is an outlet for students, other than academics. I know [clubs allow] a lot of people to get together, so I’m excited and it amazes me that they were doing that and it’s still going on. So, way to go. Keep it up.”