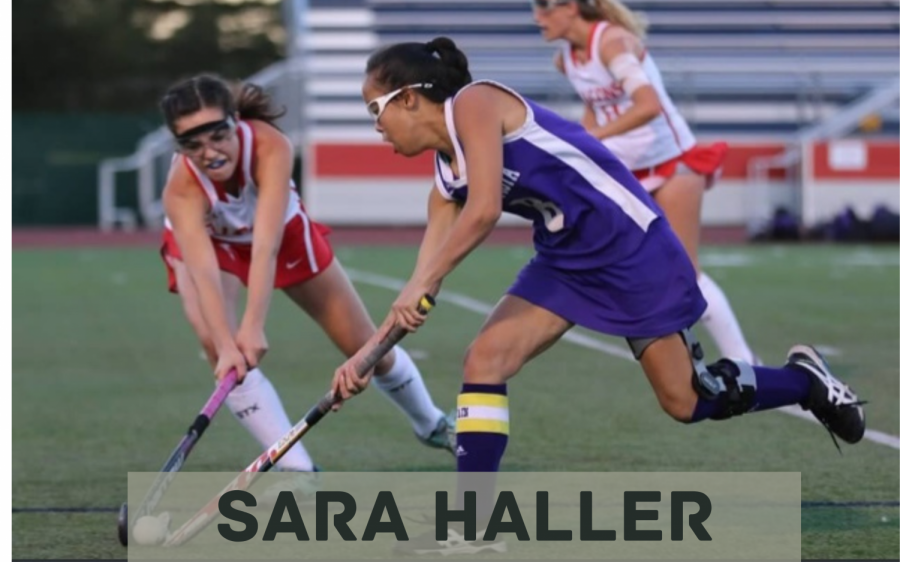 Diving and field hockey — these two sports seemingly have no connection to each other. One is played on a turf field, while the other takes place in a pool. But for MVHS almuna Sara Haller, ‘17,  these two sports have been integral to her high school and collegiate athletic career. However, during her third year at Williams Paterson University in New Jersey, Sara realized she no longer retained a passion for playing collegiate field hockey, making the difficult decision to quit the sport she was recruited for and instead returned to diving.

“I tried to convince myself that I was enjoying [field hockey] just because I made that sacrifice and that commitment to make such a big decision in where I would attend college, because the whole thing was circled around me playing field hockey,” Sara said. “Heading into junior year, I really wasn’t excited to play, but I quickly realized that my priorities had changed. In high school and heading into college, I really felt like I was an athlete before a student because school had always, especially at MVHS, been a stressful thing for me, and being involved in sports felt like an escape that I needed. But as I started to enjoy school more in college, my priorities changed.”

Before reaching the collegiate level and having to decide between her two sports, Sara’s athletic journey began at 18 months old, when she attended Mommy & Me classes for gymnastics. While her mom Sheryl Haller notes that at first, she “fought tooth and nail [against] going,” Sara quickly developed a passion for gymnastics, pursuing it until ninth grade before her parents removed her from the sport.

“When you get to a competitive level, it is a lot of time, including weekends with competitions, and so that was pretty time-consuming from a sports perspective,” Sheryl said. “But then as a freshman in high school, we were noticing that the time became an issue, and then also ‘do you want to bottle yourself up with only gymnastics and miss the high school experience?’ was our thought.”

Sheryl recalls watching her daughter research sports she could easily switch to at MVHS from gymnastics. When Sara realized that many of the skills she had developed as a gymnast could be translated to diving, she began diving in ninth grade and formed friendships within the diving team’s tight-knit community.

Later, during her sophomore year, one of her best friends encouraged Sara to try out for the field hockey team. Although she had never played before, to her mother’s surprise, she made the team.

“I thought, ‘Oh well, you don’t have to make every team you try out for,’” Sheryl said. “And then she comes home after all the tryouts, going, ‘I made the team,’ and I was shocked. I was like, ‘But you don’t know how to do anything,’ and she goes, ‘You know what, Mom? I’m fast.’ And she was — she’d beat all the other kids, even the ones who were experienced on the team in terms of how fast she could move. [The team] saw that as very valuable, so she was in a defensive position, because her job was [to] run, get in front of them [and] don’t let them by you.”

After her first school season ended, Sara decided to further improve her field hockey skills by joining San Jose Fly, a local club team, during the spring of her sophomore year. As Sara began to seriously consider continuing field hockey in college, she made the decision official by quitting diving after her first two years on the MVHS team. Then, she signed up for the National Field Hockey Festival in Palm Springs through her club team in the fall of her junior year.

At the festival, a couple of college coaches reached out to Sara, but she couldn’t see herself fitting in at those schools. Instead, she made her own list of colleges that not only had a field hockey program to her liking but also included an athletic training program, which is what she wanted to study in college.

However, her plans to reach out to colleges from her list all came to a stop when in the spring of her junior year. Sara tore her ACL — impacting her athletic abilities before she could begin the recruitment process.

Both Sara and her parents knew that fall of senior year would be a crucial part of the recruiting process, and this serious leg injury sidelined Sara for most of the season. However, Sara’s determination in both the recovery process as well as recruitment resulted in her returning to the field for the last third of the season. While Sara’s play time per game was minimal — only 15 minutes at a time — she was able to collect enough video footage of her gameplay, exercises and skills to craft a complete recruitment application.

“[Sara’s physical therapist] told her she would be out nine months [with] no playing,” Sheryl said. “But man, she worked hard, and he was telling me, ‘This is the opposite of most patients, when they’re told they need to do their physical therapy exercises, you have to get on them to do it. They don’t do it.’ [But] her PT said, ‘Oh my god, it’s the opposite for Sara. I have to pull her back. I think she’s doing too much, too fast.’ But she worked really hard in the summer, so much so that she recovered faster than the surgeon thought she would. I know that meant the world to her, to be with her teammates, and she was so excited to be able to go back on the field. And so we took every video we could think of in her little bit of time.”

Following her recovery, Sara continued reaching out to colleges where she could pursue both her athletic and academic goals. However, she didn’t take the traditional route of making a verbal commitment first. Instead, she first applied to colleges that had shown interest in her playing and had an athletic training major, and then decided where she would attend after doing overnight visits at those schools in the spring of her senior year. After visiting her top three schools that were all on the East Coast, where Sara notes there tends to be a greater passion for field hockey, she decided on Williams Paterson University in New Jersey.

“My freshman year [of college], I was excited to experience playing field hockey at the collegiate level,” Sara said. “I liked that being part of a team forced me to interact and get out of my comfort zone and meet new people that I probably wouldn’t have met [otherwise], or been willing to go out and meet people on my own. So it’s like an immediate group of people that you’re already forced to be friends with.”

As Sara’s teammate and roommate, Kristin Freas-Papa recommends others join a sport in college, as she met many of her closest friends, like Sara, through field hockey. Over the years, Freas-Papa has formed a close friendship with Sara and has seen her develop into a more confident person, both on and off the field.

“She was very quiet [and] we didn’t really talk much,” Freas-Papa said. “But after the first week, she broke out of her shell, and [we] got to know each other more and became really good friends. As a teammate, I’d say she’s kind of the same way: you [first] have to get to know her and learn how she plays. And then after you learn how she plays, then you can really work well with her.”

Now close friends, Freas-Papa appreciates Sara’s honesty as well as her motivation, especially when it comes to exercising and encouraging her teammates “to want to do better.”

Sara’s motivation pushed her to make even more out of her college experience and build upon her athletic abilities. During her sophomore year of college, she went to a swim and dive meet and realized she was capable of the athletes’ dives. Because the diving team was fairly small at that point, the coach welcomed her onto the team, making her a two-sport athlete for around 10 months.

While being a part of the field hockey team allowed Sara to grow and instantly make friends, Sara found herself less passionate about the sport at the beginning of her junior year. As her priorities changed from sports to long-term career goals, Sara struggled to find a balance between sports and academics, especially since she found herself leaning towards academics.

Being a two-sport collegiate athlete took up the majority of her time, and while the swim and dive team was more flexible with this due to diving being a more individual sport, the team aspect of the field hockey team did not allow Sara to pursue all of her academic opportunities. Specifically, her athletic training major requires her to complete clinical experience hours by working with various sports, and in her junior year, she was assigned to football, which she found to be an honor since the sport is typically assigned to those at the top of the class. However, she would have to regularly miss these football games due to field hockey practices and games. As a result of not wanting to skip these valuable experiences that would provide her the skills to become a successful athletic trainer, Sara left the field hockey team.

After this stressful transition, Sara is currently taking a year off but plans to return to diving at WPU next year with a newfound balance between academics and athletics. Despite her departure from field hockey, Sara notes that playing the sport in high school led her to form lifelong friendships on the MVHS team and understand her priorities and future prospects, finding a school that suited both her athletic and academic goals. She reminds MVHS athletes going through a similar process as hers three years ago that there is a school out there for everyone.

“Playing field hockey at MVHS, being part of that team, was a really important time in my life because I got to meet people, my teammates and my coaches that ended up playing a really big role in my life,” Sara said. “Without field hockey, I’m honestly not sure that I would be attending a four year college. That was a big motivator for me to step out of my comfort zone, and it made me want to go to college to play sports, but because of that I ended up finding [my] school.”