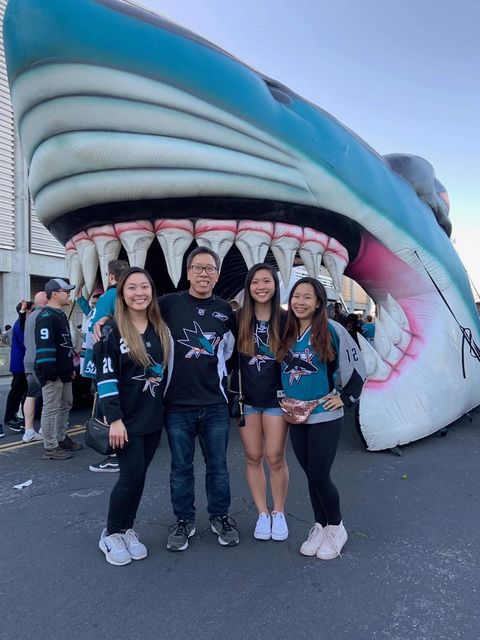 Senior Maddie Lee for the camera at a Sharks game with her family. Photo courtesy of Maddie Lee | Used with permission

This is Sharks Territory

The San Jose Erena echoes with cheers as the crowd jumps and screams enthusiastically. A San Jose Sharks player is huddled around by his teammates and all scream with joy after he scores a goal against the St. Louis Blues. Junior Sophia Chen says that watching her first game on Dec. 21, 2019, was one of the best nights of her life. Chen has been a figure skater since she was eight, training at the same stadium where the Sharks team practices, the Solar4America Ice Rink.

“Because [Solar4America Ice Rink is] home to an NHL team, there’s a very big hockey culture in the rink itself,” Chen said. “So growing up, I was surrounded by a lot of hockey and [it became] a big part of my life because figure skating is something I’ve been doing ever since I was a child … There are many things that are representative of the Sharks because they’re [based] in … the area where I grew up, so they remind me of my childhood and my home.”

Senior Saravana Polisetti’s interest in the Sharks grew because he is a member of an ice hockey team himself. He plays for the California Cougars, a travel team that is part of the Northern California Hockey Association league. Polisetti began taking figure skating classes at a young age, when he watched many of the hockey teams play. He was immediately intrigued by the sport, which over time, allowed him and his teammates, as well as him and his father, to bond over a common team that they were fans of.

“It’s the home team, [so] I watch all their games,” Polisetti said. “Every practice my team always talks about what happened in the game the previous night. [For] any game in general we analyze the aspects of how [ goals] [were] scored. Since I play hockey as my sport, my dad always says things like, ‘Did you see how he scored [that] goal? Now do the same thing, so [watching the game] is like support [in my hockey skills].”

Like Polisetti, senior Maddie Lee connects with her family members through the excitement of the game. As her oldest sister is an avid fan, Lee believes that a mutual fandom towards the team allows her family to share the enthusiasm during games together.

“[My family] was the reason why I started liking hockey,” Lee said. “I see [watching the Sharks] as a family bonding experience because whenever we go [to the stadium], all of us are together and it’s always really fun. It’s a time for us to be together, in the moment, within the crowd.”

Chen believes that wearing Sharks merchandise is a nice way of showing support among the spectators. She owns a poster, multiple T-shirts and jackets, a quarter zip, a hat and a teddy bear, all Sharks-branded. Lee notes that wearing merchandise at specific games allows the crowd to show a sense of unity.

“I like wearing [merch] because when you go to the games, it’s really cool seeing everyone show up and all this Shark spirit [everywhere],” Lee said. “Some people [even] come with face paint. When [the Sharks] score during the game, it’s really exciting because the whole atmosphere is super pumped  — and everyone [just] seems together.”As a fan, Chen emphasizes that even when the Sharks lose, she thinks it’s important to stay committed to the team and show support. Chen personally stays invested in this mindset by looking at the highlights and learning moments that occurred during a lost game.

“What [I] usually [do after a losing game] is I review their plays and I go back and watch the cut clips of the most important moments of the game,” Chen said. “I see what the opposing team did, what our team did, their strengths, their weaknesses. I try to see why they lost, instead of getting really angry [at them].”

Through all the team’s wins and losses, Polisetti hopes to see the Sharks in the playoffs in the future, as the team wasn’t able to make it during the 2020 season.

“The Sharks are a good team but they require better chemistry [within the teammates] to make it to the playoffs,” Polisetti said. “Once they fix that, they will be able to win the Stanley Cup, and hopefully they can win it next season.”