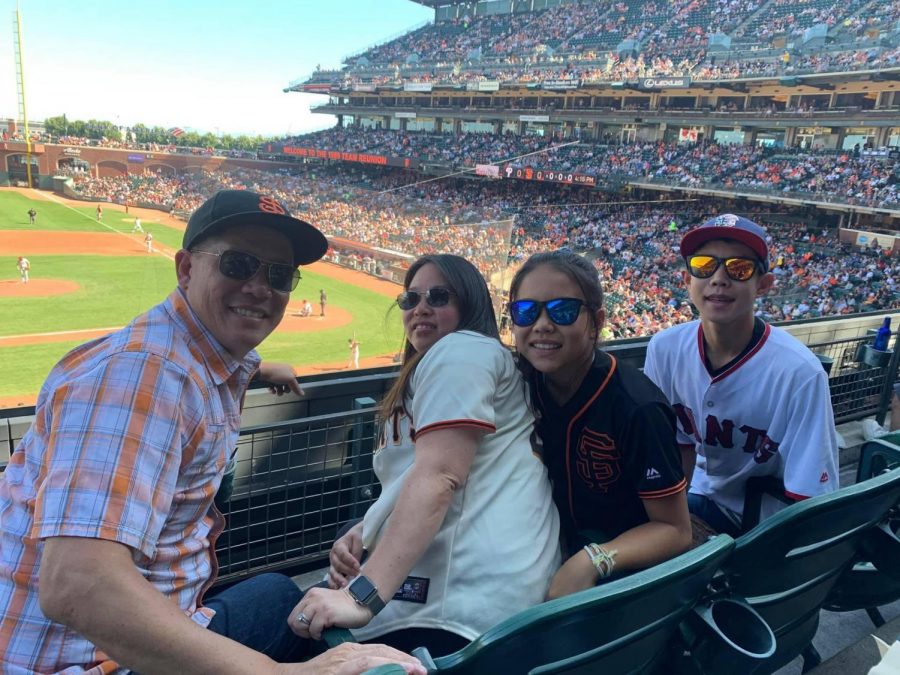 Senior Connor Nieh attends a Giants game with his family

Ever since eighth grade, junior Arthur Chan never leaves for school without wearing his San Francisco Giants cap –– the bright orange outlines of the Giants’ “SF” logo on his head symbolized his dedication to the local Major League Baseball team. Chan has been a fan of the Giants since he was five, taking after his uncle, who is also an avid fan.

Chan says he has been lucky enough to attend some of their local games. Although he often spends time with family watching the Giants’ games, he believes that physically being at the games is a completely different experience.

“It’s Oracle Park now but when I was at AT&T Park, the atmosphere was nice and right on McCovey Cove, and there’s this sea breeze that comes in every now and then,” Chan said. “Just the atmosphere of a ballpark in general is always nice.”

Senior Austin Ota is also a dedicated fan of the Giants. Since his family owns season tickets, he is able to attend approximately 10 games each year. Ota has been a fan since childhood, as both his parents are lifelong fans. Some of Ota’s favorite baseball memories come from sitting behind the backstop at the Giant’s games.

“There was a ball that was hit [towards us],” Ota said. “Not a lot of balls get hit [towards us] because there’s the netting, and so I jumped out of the way and my dad caught it barehanded. And then I took it out of his hand and pretended that I caught it.”

In addition to having memorable experiences in person, Ota also enjoys meeting the players and getting their autographs after games. He says that being able to connect with them on a personal level is something he would never be able to do by just watching the games on TV. Ota still looks fondly at some of the first autographs he’s received.

“His name [was] Brandon Belt, the first baseman, it was probably 2013,” Ota said. “I was still really little, and my voice was really high, so I had the cuteness effect going off. We were by the dugout before the game, asking for autographs. He came back and he signed, but he wasn’t very happy.Interested in interacting with his favorite baseball idols on the Giants, Ota has sometimes even gone to extreme measures to meet his favorite players. One time, Ota and his father were in Chicago and realized that the Giants were playing there.

“We went to their hotel and we basically stalked them coming in and out of the hotel that night [until] one of the players kicked us out,” Ota said. “We had the police called on us ––we had to leave.”

Senior Connor Nieh, like Chan and Ota, is also an avid Giants fan, using the local team as a way to connect with his family and often ranting about the team’s successes and failures.

“My parents and sister have also become fans alongside me, and that’s made the overall experience a lot more fun,” said Nieh. “Due to their interest in the team, I’m also able to go to more games and have open conversations about the team.”

Since the Giants are a local team, Nieh believes that he is able to create a stronger connection with them. Additionally, this makes it more convenient for Nieh to attend games and support his team.

“Being so close to the Giants is so comforting because I feel more integrated into the community,” Nieh said. “Being close makes me feel like I have a small impact on my team’s success. I absolutely have hope for this team.”

Ota feels similarly and supports local teams for not just baseball, but also other professional sports like basketball and football. While he does admit that he did not become a fan of these other teams until they found success, he believes that he is a true Giants fan because he’s been a fan of them for so long.

“I’m also like a 49ers and Warriors fan,” Ota said. “But like, if I’m being honest, they weren’t interesting until they started winning. But like, the Giants started winning right when I started watching baseball.

In addition, while Ota is forced to set aside three hours of his day on days of the Giants’ games, he never sees it as a huge issue. Through being an avid fan, he has even been inspired to pursue a career in sports broadcasting.

“It’s nice because the Giants have really good broadcasters,” Ota said. “I want to go into the profession [of sports broadcasting] so I can study how they work. But I can also just listen to them while I’m doing homework or listen to replays going to bed.”