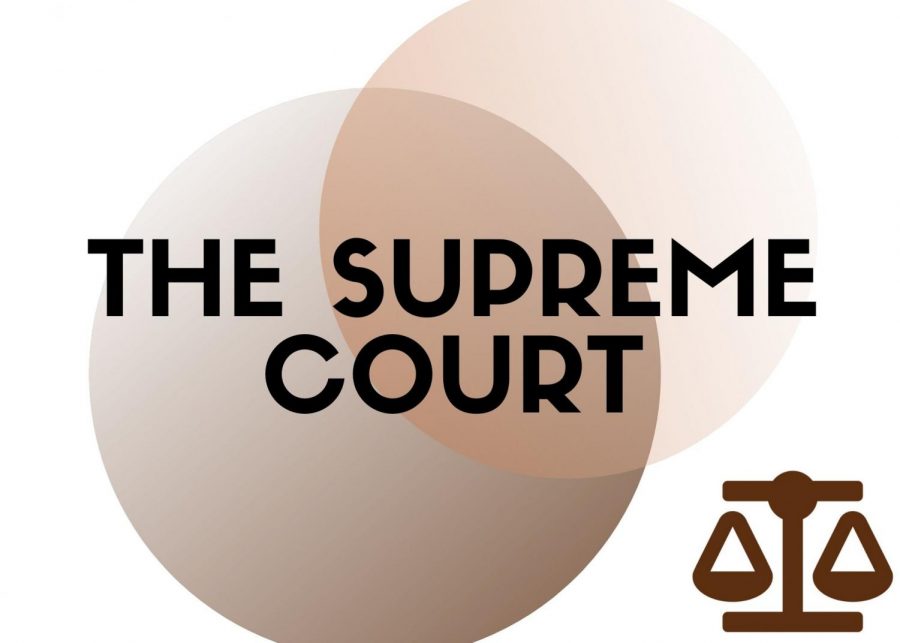 Following Justice Ruth Bader Ginsburg’s passing 46 days before the 2020 Presidential Election, President Donald Trump announced Judge Amy Coney Barrett, who previously served as a judge on the Court of Appeals for the Seventh Circuit, as his nominee to fill Ginsburg’s seat on the Supreme Court.

His announcement instigated a wide range of responses — conservatives were pushing for Barrett to be seated in the court before the election. In contrast, liberals were hoping to drag out the nomination of a new justice until after the election, as conservatives insisted upon in 2016.

Barrett has continuously embraced an originalist approach to the Constitution throughout her career, meaning that her interpretation of the law will strictly follow the views of those who drafted the Constitution in the 18th Century. Originalism stems from the idea that the meaning behind laws do not evolve with time. Still, the Constitution was written more than 200 years ago by white, privileged males who wanted to protect and benefit themselves in the future, and the world has seen extreme, progressive changes since then. 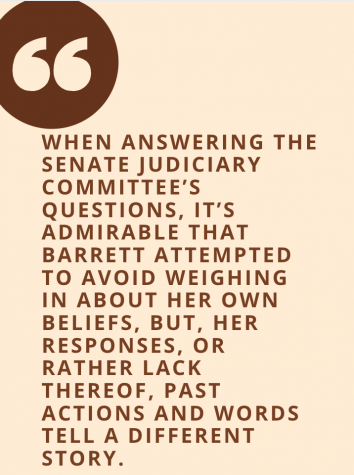 Originalism should not be entirely denounced as it can help deter justices from integrating their personal views, but combined with a 6-3 conservative-dominant court, Barrett’s approval swings the court in a regressive direction. When answering the Senate Judiciary Committee’s questions, it’s admirable that Barrett attempted to avoid weighing in about her own beliefs, but her responses, or rather lack thereof, past actions and words tell a different story.

During the hearing, Barrett stated that she does not view Roe v. Wade, the case where the Supreme Court legalized abortions during the first trimester back in 1973, as “super-precedent.” Barrett went on to define “super-precedent” as “cases that are so well-settled that no political actors and no people seriously push for their overruling.”

Pressed by Sen. Amy Klobuchar, Supreme Court nominee Amy Coney Barrett says she doesn’t classify Roe v. Wade as a “super-precedent” that would never be overturned, but says “scholars across the spectrum say it doesn’t mean that Roe should be overruled.” https://t.co/OFIhfeo130 pic.twitter.com/j2ayQncHK4

While she immediately clarified that by the case not being “super-precedent” does not imply it should be overruled, in 2006, she signed a newspaper advertisement that opposed Roe v. Wade and legalized abortions. Then, during her past three years on the Court of Appeals for the Seventh Circuit, Barrett voted to revisit two rulings that blocked separate abortion laws in Indiana. There’s no doubt that the conservative justices on the court with the majority pose a threat in overturning Roe v. Wade and could impose strict laws on abortion and access to women’s health in general.

On top of reproductive rights, Barrett’s actions have also expressed hostility toward the LGBTQ+ community. In 2014, Trinity Schools Incorporated, which oversees three schools, “adopted a policy not to accept children of unmarried couples,” according to The New York Times. Barrett served as an active member on the board from 2015-2017.

What’s scary is, that’s not all.

As a part-time professor, Barrett has given lectures which were paid for and backed up by the Alliance Defending Freedom (ADF). The Southern Poverty Law Center (SPLC) has defined the ADF as an anti-LGBTQ+ hate group, but when brought up during her hearing, Barrett claimed she was unaware of the organization’s discriminatory efforts.

Afterward, Barrett was questioned about her use of “sexual preference” after referencing the phrase twice while addressing Obergefell v. Hodges. In this civil rights case, the Supreme Court deemed states’ bans on same-sex marriage unconstitutional and ruled that states must recognize same-sex marriage.

Sen. Mazie Hirono of Hawaii later called out Barrett, saying, “Let me make clear, sexual preference is an offensive and outdated term.” Barrett then responded, “I certainly didn’t mean, and would never mean, to use a term that would cause any offense in the LGBTQ+ community. So if I did, I greatly apologize for that.”

Maybe Barrett genuinely was not aware that ADF is anti-LGBTQ+, and maybe she never learned about how “sexual preference” implies that someone’s sexual orientation is a choice that can be “fixed.” But 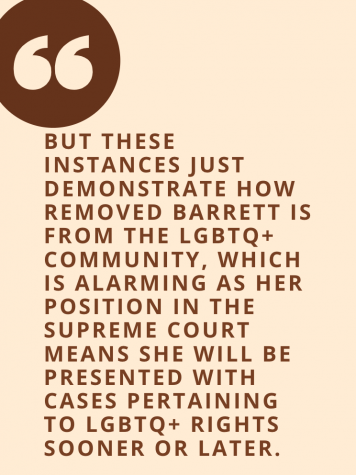 these instances just demonstrate how removed Barrett is from the LGBTQ+ community, which is alarming as her position in the Supreme Court means she will be presented with cases pertaining to LGBTQ+ rights sooner or later.

Issues surrounding climate change are also on thin ice, and though Barrett’s stance on climate change has not been made as clear as her positions on abortion or LGBTQ+ rights, her presence will provide the conservative judges more sway on ruling against environmental restrictions and may even collapse the Environmental Protection Agency (EPA).

Unfortunately, these examples barely scratch the surface of what a conservative-dominant Supreme Court’s America will entail. The conservative justices on the court are also ready to crack down on the Voting Rights Act, which bars voter suppression and racial discrimination in voting, as well as the Affordable Care Act (ACA), which if dismantled, would leave a significant number of Americans without healthcare amid the COVID-19 pandemic. Looser gun laws and restricted immigrant rights are also foreseeable possibilities.

With Barrett on the court, Trump will have appointed three justices during his term as president. It should be important to keep in mind that during his 2016 presidential campaign, Trump promised numerous times that he would nominate justices that will overturn Roe v. Wade, and it seems Barrett is no exception. In contrast, during a Democratic debate in early 2020, Democratic presidential candidate Joe Biden pledged to nominate a Black woman to the Supreme Court to increase representation. Over the summer, he stated that his team had already started generating a list of potential qualified nominees.

.@JoeBiden says that if he was president, he’d look forward “to making sure there’s a black woman on the Supreme Court.” #DemDebate https://t.co/66AoqMK8pw pic.twitter.com/hcwNoXs3sp

As Americans have expressed outrage over the proceeding of Barrett’s nomination, due to hypocrisy behind the decision by Senate Republicans, Democrats have also been considering the option of court-packing, which is increasing the number of justices on the court. However, court-packing would be a last-resort-type option as Biden has previously expressed during a debate in Oct. 2019, stating that he is not a fan of court-packing, fearing they would “lose any credibility the court has at all.”

The Supreme Court has maintained nine justices since 1869, and packing the court could potentially set forward a cycle of adding more and more judges for political gain, which would diminish the court’s efficiency and legitimacy. But if Biden is elected as president, court-packing would help balance out the 6-3 conservative majority as he would nominate liberal-leaning justices.

More recently, Biden claimed that he would provide his current stance on court-packing near or after the election, depending on how Barrett’s nomination goes — but the chances of expanding the number of justices are higher than ever.

While it’s unclear what would happen if Biden is elected, one thing is for sure: the impacts of having six conservative justices, compared to three liberal justices, won’t be as detrimental, especially since there won’t be a president pushing against our rights.

If we are in no position to vote, then we have to be diligent about spreading awareness and encouraging others to make their voices heard. America’s future may look bleak with all the threats to equality being made, but we can change that. We may not have a choice in nominating Supreme Court justices, but we have the right to vote and protect our fundamental rights as Americans.