Students and staff receive evacuation notices due to spreading wildfires 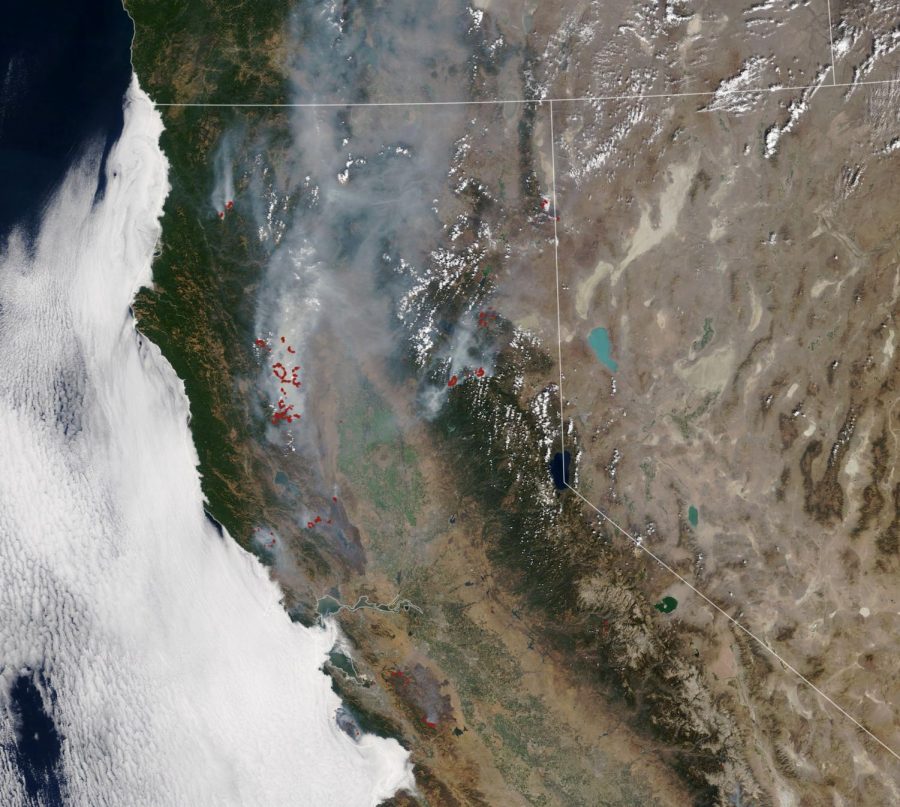 This image from the NASA Earth Observatory demonstrates the extent of California’s 2020 wildfires and the burn scars left on the state. Used with permission | NASA

When FUHSD new teacher mentor Pooya Hajjarian bought his Boulder Creek home in 2014, he described it as a “complete fixer upper.” Fast forward six years, and he says there’s not a single square foot that he hasn’t updated or rebuilt in some way, including transforming his original dirt backyard into a beautiful garden.

“I went to UC Santa Cruz so I knew I loved the Santa Cruz area and the mountains,” Hajjarian said. “I feel like I can work in Cupertino, but I love that rural life and when I go home — it’s the opposite of everything Bay Area. I got really fortunate [because] my neighbor next door is a retired contractor and he has become like a second father to me, and he has helped [and] taught me how to do everything.”

When Hajjarian received an evacuation notice due to the spreading California wildfires, his first thought was that six years of work could disappear in one night. To add to this fear, Hajjarian received his evacuation notice on Tuesday, Aug. 18, when he wasn’t even in the vicinity. He, along with his two dogs, had gone on a short trip to Sacramento.

“I started freaking out internally because I’m thinking I didn’t even have a chance to go back and get anything,” Hajjarian said. “I hadn’t really evacuated. [People] had a moment to grab their things and leave. I felt like I didn’t even have that.”

Hajjarian says that fortunately, he was able to return two days later from Sacramento and had the opportunity to pack more of his belongings. When he entered, he said the abundance of ash everywhere “resembled apocalyptic snow.” Despite wearing a mask, he described the smoke as really thick and at one point set off his fire alarm.

After grabbing possessions such as some clothes and his dogs’ medication, he decided to take what could potentially be a last video of his home, and he eventually had to shut off the camera after starting to get emotional. He then hosed down his roof and made sure there were no flammable materials on it; he didn’t know if it would even make a real difference, but wanted to do anything that might help.

“At the time, I [also] heard about some looting going on, so I got back in my car, bumped to the top of the street, and got my camera going again,” Hajjarian said. “I was recording a video as I was driving down the street. Basically my goal was to help the neighbors know that their houses were still standing and that I wasn’t seeing any suspicious activity as far as looting and whatnot.”

Like Hajjarian, Spanish teacher Joyce Fortune evacuated with her family on Tuesday, Aug. 18. Despite not receiving an official evacuation notice, Fortune’s family realized that the fires were approaching and didn’t want to keep living with the intense heat and smoke and wait until the last minute. Their family left that night to a friend’s home in Aptos.

“It’s hard to know what to take [when you’re packing to evacuate],” Fortune said. “We have a dog and we have a rabbit. So we had to pick up all the dog stuff and the rabbit stuff. I was trying to just not panic, like ‘OK, I’m going to think really slowly and carefully. What do I need to get, I need to get this, I need to get that.’ I mean, I even remembered the dog’s toothbrush.”

Fortune evacuated the night before the first day of school, and this, coupled with online distance learning, made it an unconventional one. She says she was “frantically running in circles” the morning of, trying to figure out technology while simultaneously working in an unfamiliar home.

After staying one night in Aptos, Fortune received an offer from her co-worker, Spanish teacher Molly Guadiamos, to stay with them. Fortune’s family then moved to Guadiamos’s home for three nights, and since this was close to MVHS, Fortune was able to teach from campus.

“[Guadiamos] had so many other [family evacuees] there that it just wasn’t possible to long term stay at her house,” Fortune said. “So on Saturday, we decided that we would like to come [to Danville] to stay in my cousin’s house. In a way, it’s a little bit of a blessing that there’s COVID because I don’t have to go to Cupertino every day from Danville, which is in the East Bay.”

Senior Claudia Maldonado, despite not having had to actually evacuate, experienced the same feelings of stress and fear that Hajjarian and Fortune faced. Living near the Santa Cruz mountains, Maldanado’s family is accustomed to the smoke that arrives every year with fire season; however, they didn’t realize that this year was different until they received an unofficial warning from firefighters passing through their neighborhood on Aug. 19 and then an official warning for potential evacuation on Aug. 22.

“It became much more real at that moment [after the warning],” Maldonado said. “I’ve never felt anything like it because you often distance yourself from these kinds of issues, especially fire season. We’ve never really experienced such a thing so close in the Bay Area. I don’t think [my family] talked to each other after, we just kind of looked at each other and went to our respective areas of the house and began packing frantically. So my mom packed all our important documents, and I went to my room and stared at my clothes for a couple of hours.”

In terms of evacuation plans, Maldonado says that if necessary, she has family in other parts of Cupertino they could stay with.

According to Fortune, after moving in with her extended family, evacuating became a less stressful and chaotic experience, since there was more space and fewer people compared to Guadiamos’ home. Hajjarian feels the same way, having evacuated alone with his dogs to Sacramento, saying he feels like he’s “not in anyone’s way.”

Hajjarian adds that he feels fortunate because a lot of his friends ended up having to go to nearby hotels in Morgan Hill and Milpitas using a recently published list sharing hotels that offer free or discounted lodging for evacuees. Others have gone to Santa Cruz, where a church and hotels offer lodging, as well as an evacuation center with tents in Watsonville. Some have even left the Bay Area for the time being, going to San Francisco, Oregon and Pasadena.

For Maldonado, trying to destress has been challenging because everywhere she looks, there’s constant reminders of the fires, such as the omnipresent smoke, the orange horizons and the reflections of the fires in the clouds. 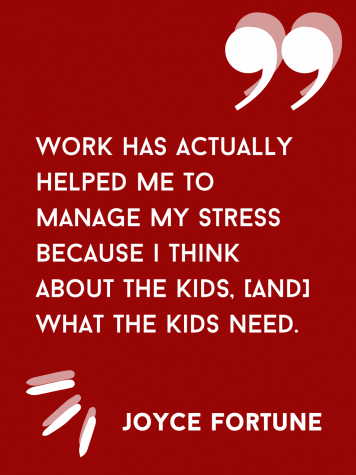 “We can’t see [the fires] because there’s a mountain that blocks it, but we would stick our faces to the window and turn off all the lights to see the glowing red and orange lights,” Maldonado said. “So it was honestly quite hard to forget about it, but we’re trying to go about life as we normally would, like watching TV while the window is very smoky, just so that we don’t panic.”

Fortune says that she has been relatively zen about the situation and is trying to laugh about it in light of the fact that 2020 as a year has been chaotic. She adds that she’s good at dealing with crises, especially when she’s able to take action, such as packing and retaining semblances of her normal life and teaching.

“Work has actually helped me to manage my stress because I think about the kids, what the kids need,” Fortune said. “‘What do I need to do to get on Zoom, to get my classes, to provide the best education I can for my kids?’ That has helped me. My husband was really stressed out last week in particular and some of that was [because] he was watching the fire maps and paying attention to where the fire was and what the winds were doing. He spent a day online trying to figure out what was happening and I think that was very upsetting to him and he wasn’t feeling happy about the coverage [and] what they were doing or not doing to contain the fires.”

With respect to damages and insurance coverage, Hajjarian says that even if his house doesn’t burn, his other concerns are smoke and ash damage, as well as electricity and water cutoffs, which would spoil the food in the fridge.

Fortune has similar concerns, and explains that although the fires have died down and her house is fine, the water system suffered heavy damage. In the San Lorenzo Valley, the water tank is placed on a hill, which was impacted by the fires. As a result, much of the infrastructure has been destroyed — the water tank and watersheds have been damaged, and many pipes, which have petroleum products, have melted into the water system. The water is undrinkable at the moment and Fortune is waiting on Calfire to check the roads, bridges and houses, since evacuees will only be allowed to return after assessing and documenting the damage.

In regards to the unprecedented reach of the California wildfires this year, Maldonado believes this is simply the beginning of worsening environmental conditions. Especially with climate change and the environmental regulation laws that have been rolled back by the Trump administration, it is disappointing to her that not enough is being done to combat these issues.

With Hajjarian’s background as a biology teacher, he believes that although he has been teaching students about climate change for years, people tend to not fully understand it until they’re impacted by it on a personal level. He says it’s important for people to realize that the environmental phenomena occurring in California recently — wildfires, floods, thunderstorms and a record high temperature of 130 degrees — is unnatural and a direct effect of climate change. 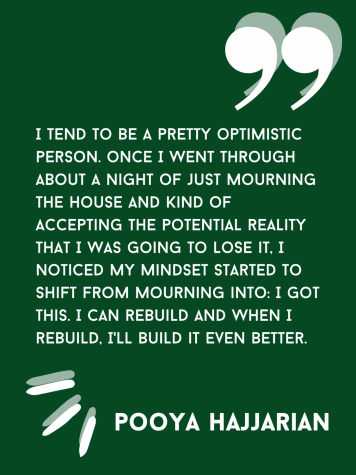 “I don’t think anyone’s looking around and trying to point fingers, but I think everyone is really wanting, especially people in power, to recognize that climate change is a thing,” Hajjarian said. “I think you feel a little helpless and the best that I can do is just continue to educate my students on what it is and how we can help. But I think what we really need is to build our community so that when the next generation decides to do things, they can hopefully take positions of power where they actually make decisions that will impact us. And I think it has to be done nationally, because you see, in California, no matter how much you try to do, this is going to be an all-hands-on-deck situation.”

Hajjarian also notes that this evacuation experience has helped place things into perspective for him, and has made him realize that he is fortunate for being alive and safe. He appreciates everything more — in the past, he would comment on his house being small, but now, he misses his small house.

“I tend to be a pretty optimistic person,” Hajjarian said. “Once I went through about a night of just mourning the house and kind of accepting the potential reality that I was going to lose it, I noticed my mindset started to shift from mourning into: I got this. I can rebuild and when I rebuild, I’ll build it even better.”