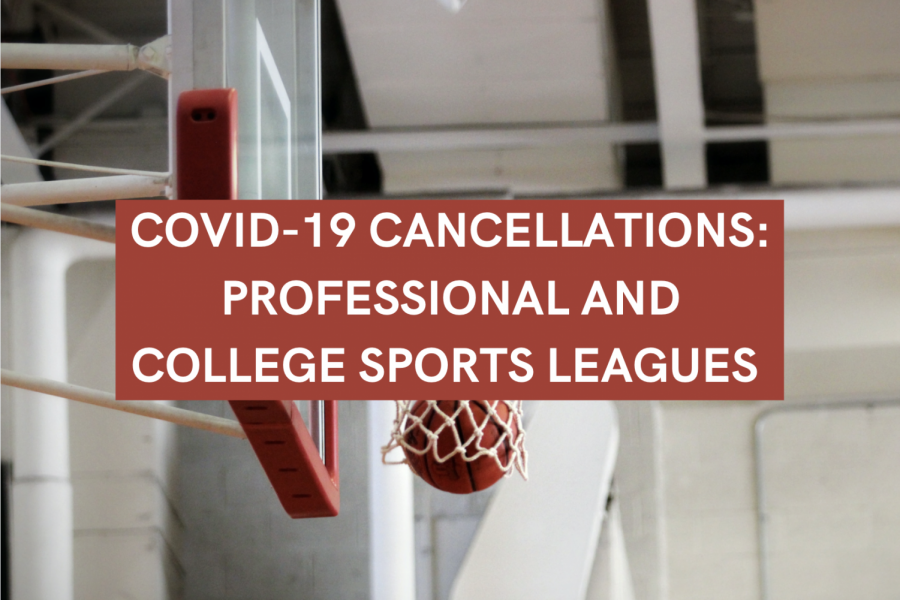 Shortly after the National Basketball Association (NBA) announced the suspension of the rest of its games for this season on March 11, other professional sports leagues took similar actions in response to COVID-19 (coronavirus). The National Collegiate Athletic Association (NCAA) has also cancelled all of its events scheduled for the rest of this year, impacting the winter and spring sports. Additionally, the 2020 Summer Olympic Games that were set to be held in Tokyo, Japan have been postponed, for the first time since 1944.

Senior Aadria Bagchi, who closely follows the Golden State Warriors and NCAA Men’s Division I Basketball Tournament (March Madness), was disappointed when she heard the news. Bagchi has been watching March Madness games since seventh grade and she started making brackets, where fans can attempt to predict the outcome of the tournament, in eighth grade.

“It really sucks because [March Madness] is honestly so fun [because you get] to just watch these college players play. Sometimes it’s more fun than watching the NBA because it’s a few games that literally determine who wins a championship,” Bagchi said. “Every year I make a bracket with a few of my friends and we compete to see who has the most wins and who predicted the wins most correctly, so it really sucks and we were all super bummed that it was canceled.”

Bagchi explains that sports were a big source of entertainment for her, and while she is at home all day, there is no longer anything for her to watch. In years past, she would keep up play by play with the Warriors and watch almost every single March Madness game, especially for the teams she thought would win. However, when she checks the NBA app now, there are no notifications or updates other than a player getting infected with the virus.

Prior to these cancellations in basketball, some professional sports such as international soccer leagues attempted to continue on with their games without audience attendance. Sophomore Remy Haghighi, who follows different soccer and football leagues, notes that although playing in empty stadiums prevented large crowds, the games just weren’t the same.

“I like watching sports, but now as cancellations happen, it isn’t exactly the same experience,” Haghighi said. “Being able to see all the fans in the stadiums makes a big difference to how we view games. I was disappointed [to see] how the virus is affecting us in so many ways.”

Ultimately, these soccer leagues chose to follow the rest of the world’s action and delay or cancel their games. Financial consequences have also resulted from these worldwide cancellations. Some sports, such as hockey, have faced the worst since it doesn’t have as large of a television audience and mainly relies on ticket sales.

Since many people who rely on these sporting events for income have been financially impacted, the sports industry has tried to help those whose salaries have been cut or whose jobs have been lost. For example, some NBA players have donated money to employees of stadiums that are currently shut down, while other sports teams have negotiated salaries with coaches and players.

“I find [that] the actions [taken] were beneficial because as time is passing, [more] players get [the virus],” Haghighi said. “If they continued to play, the situation may have been a lot worse than it is now. They might even have had to cancel or postpone games and matches for a longer time.”

Science teacher Pooya Hajjarian, who follows most Bay Area sports teams such as the San Francisco 49ers, Golden State Warriors and San Jose Earthquakes, is familiar with the feeling of being in the audience of stadiums during games.

Hajjarian believes that watching sports can be a good social activity, but it’s hard for fans to enjoy watching games the same way they did prior to COVID-19. However, Hajjarian agrees with Haghighi that the measures taken were necessary.

“It seems that as soon as the coronavirus started to be taken seriously, the sports world responded fairly quickly by canceling all events and tournaments,” Hajjarian said. “It’s sad for sports fans, but totally understandable.”

Overall, Bagchi hopes that the curve will flatten so that summer practices for all sports can begin again, along with each season, especially since she’s headed off to college.

“I really hope that college basketball will start up again because we actually get to go to the games rather than just watching it on TV,” Bagchi said. “That’s something I hope. That the Coronavirus can get better, so that can happen.”