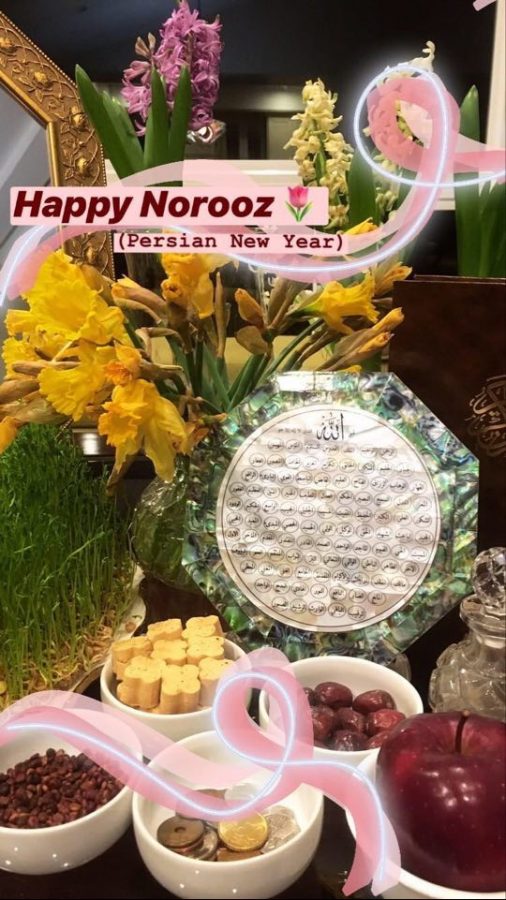 Used with permission from Roya Ahmadi

Shelter-in-place brings cultural and religious activities to a standstill

Local churches, temples and other spiritual hubs are among the public establishments affected by the COVID-19 (coronavirus) pandemic. Religious leaders have canceled regular gatherings and future celebrations, preventing many people from carrying out their routined visits to practice their faith.

But for some members of their religious communities, the unexpected shelter-in-place orders have had an opposite effect — senior Yoanna Lee, for example, says the quarantine has not only led her to feel more connected to her Christian faith but has also pushed her to take the initiative.

“After the first week or two of quarantine, [we realized] that we are alone and we have to be proactive and we have to do things to change — that’s when things started changing,” Lee said. “Currently, as a Christian, my identity, my role and my values have not changed — my circumstances changed. And just because my circumstances changed shouldn’t mean my missions or my values changed.”

Like many other local establishments, Lee’s church, the Emmanuel Presbyterian Church, has moved its normal operations and services online, using platforms like Zoom to carry out sermons and discussions. Lee says that while these online platforms enable her church’s services to continue, the usual hallmarks of a church experience, like experiencing solidarity while praying, are absent.

“To speak with someone, to see their actions [and] even in sermons, to tangibly hear their voice and the reverberation in the room — I think that has so much presence and power, and it can make a difference,” Lee said. “A lot of people are lacking that because we can’t meet in person.”

Another drawback Lee identifies is that because there is no longer a physical obligation to attend church, those who are less passionate about their faith find it easier to disconnect themselves from their religion.

“If you’re someone who doesn’t like going to church [but] if your parents drive you, [then] you have to go,” Lee said. “But on a Zoom call, if you want to not say anything to your parents, [or] just ignore the call and not listen, it’s so easy to do that. I think you have to be really proactive about not just your faith, but in general with your daily actions. It’s been challenging a lot of people in our church [and] in our community to actually do something.”

Junior Charlie Yi, who attends the Home of Christ church, agrees that it is easier for some people to disconnect from the group. In his Zoom discussions with his youth group, for example, Yi says those who usually stay silent at physical meetings are often absent from the calls altogether.

“It’s been different because the people who are there are actually passionate,” Yi said. “Usually, in a group [at church], only a couple people would respond to my questions, but given this situation, the people that come generally all respond.”

For freshman Manya Dua, who practices Hindu faith, the shelter-in-place has given her more time to study her religion through books. However, she says that practicing her faith at home isn’t the same as doing so in a temple because she doesn’t build the same “personal relationship” with God.

“People [ask], ‘There’s God everywhere — why do you have to go to temple?’” Dua said. “But that’s a bad way of looking at things — I think going to the temple is actually better because the deities are also bigger, so you also feel [better]. Also, there are lectures [that] you gain a lot of information from, and I think it helps you grow more than just doing that in your house.”

Different regulations in response to the pandemic have also prevented annual celebrations for cultural holiday celebrations. Junior Roya Ahmadi, whose parents were planning to travel to Toronto for this year’s Persian New Year (March 19), ended up FaceTiming their relatives instead. For Ahmadi’s older relatives abroad, these sudden changes have been difficult to accept.

“My mom was on the phone trying to explain this to my grandmother, and my grandmother was like, ‘What do you mean? So no one’s going to come visit me for Persian New Year?’” Ahmadi said. “She didn’t totally understand it because it was a custom that she had done every single year [for] her whole life … For older relatives, especially [those] who are more disconnected from the issue, it’s been hard on them.”

Lee, however, sees potential upsides to the challenges that communities are facing. She believes that while online meetings are challenging and can detract from people’s faith, these circumstances are also valuable opportunities for people to reflect on their missions and their faith.

In fact, using social media has actually helped Lee’s church further the missions of their faith.

“One of the biggest missions of the church that we as Christians believe in is loving — loving people in our church, loving our neighbors [and] loving our community,” Lee said. “One of the best ways we think to do that is to reach out to people — especially during the virus, when people are lonelier than ever, [more tired] than ever, lazier than ever and just stuck in their homes, we thought the virus would be a great catalyst to go into social media [and] start messaging people individually.”

Lee says that the shift to online services has also brought some families closer together. Because her church encourages family services at home in addition to the church-wide services held every Sunday, people with unique circumstances — for example, Christians with non-religious parents — who normally feel intimidated going to church, have grown closer with their families through smaller services and realized they had a community that they never took advantage of.

Lee believes a positive aspect of the challenges she and others are facing from shelter-in-place provides a valuable opportunity for people to develop themselves personally and in their faith.

“I mean, is it necessarily the best feeling? Probably not,” Lee said. “And it’s not the easiest thing either, because some people are really struggling because of this. But I think people being forced to deal with their problems and face the questions that they might not want to deal with or they’ve never thought of, is really challenging a lot of people, and people are learning to make their own choices, be proactive and do something about what they want to believe in.”