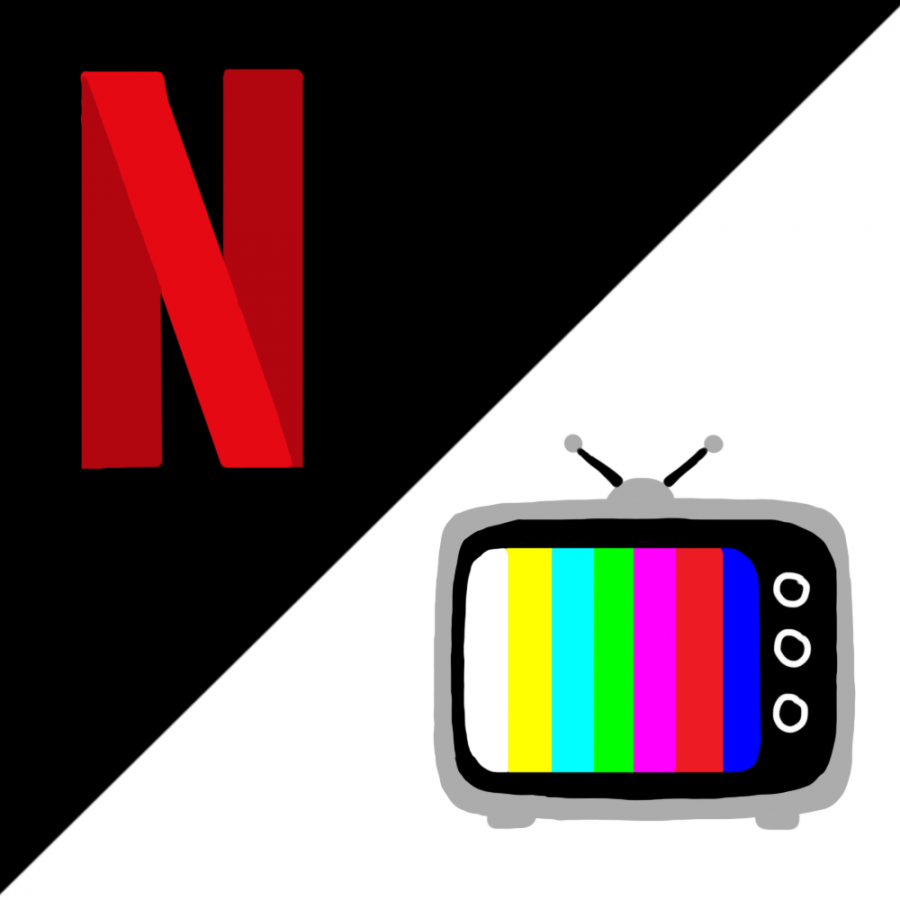 The rise of Netflix

Exploring the history of an online media empire

The streaming giant Netflix is well known for its original content through its “Netflix Originals” series. Netflix’s DVD business, however, remains relatively unknown today, despite being the company’s first major product and avenue to the company’s initial success and acclamation.

Junior Naveen Govindaraju’s family was one of the earliest subscribers of Netflix; his father Govindaraju Muthusamy, a former Netflix employee, joined the company only a few years after its founding in 1997. Despite DVDs forming the entirety of their business model at the time, Govindaraju says the vision of on-demand streaming always remained in the minds of Netflix’s top executives, even if the level of general technological development then did not permit such innovation.

“As far as my dad’s recollections go, every meeting [founder and CEO Reed Hastings] would always say that ‘streaming would be the biggest thing,’ and they would always work on projects,” Govindaraju said. “But the problem was that the internet and streaming speed wasn’t up to speed in order to fit his vision — the DVD part was really just subsidizing their research on that.”

Netflix placed great importance on quick, timely deliveries and a broad selection of media for users to choose from. But the company was always looking to transition into the digital space, which at the time offered a level of convenience that many today take for granted.

The limit was … when technology was going to become fast enough.”

At first, progress in the transition from physical DVDs to Netflix’s web platform was slow — new content continued to be released through DVDs first, instead of their online platform. But after a period of coexistence, development on Netflix’s streaming platform finally started to pick up, especially after their DVD and streaming subscriptions were split in 2011.

One of the most decisive moments in the company’s transition to streaming was in 2011, when their DVD model was on the brink of splitting off into a separate company. According to Muthusamy, Netflix executives were worried that DVDs were a stale investment and speculated that the company was at risk of going downhill if they didn’t look beyond and innovate their product.

“One of the examples [CEO Reed Hastings] gave us [was] AOL — that company was a very big company in the early 2000s,” Muthusamy said. “But that company didn’t reinvent themselves. They were holding on to whatever they had — dialog connections, email, those kinds of things — [and] they didn’t innovate themselves to go into the next step. Now, nobody talks about AOL.”

According to Muthusamy, the decision created confusion within the company; many employees couldn’t fathom why executives were planning to cut back on DVDs, a product that was so profitable and gaining so many subscribers. Muthusamy explains that a “if we don’t do it first, someone else is going to do it” mentality ultimately led Netflix to shift their attention away from DVDs.

Now, do you even remember the time that you had DVDs from Netflix?”

“The transition was a lot faster than expected,” Govindaraju said. “Once media and streaming was able to catch up to the speed of release dates and everything over DVD, a lot of people found it more convenient to just press and play, and that really boosted Netflix into converting completely into streaming. I feel like transitioning was great; like now, do you even remember the time that you had DVDs from Netflix?”

Even though Netflix today is mostly focused on streaming, their DVD model never completely died off; the company hasn’t stopped offering DVD subscriptions. In 2019, 2.7 million people were still subscribed to the service.

Although streaming has its conveniences, Govindaraju says this convenience actually takes away a key part of the original Netflix experience.

Not only does streaming contrast traditional DVD rentals, but it also clashes with many Americans’ cable TV subscriptions. Even though cable TV and Netflix’s streaming service aren’t completely parallel products in their intended purposes, some consumers of both ultimately find themselves choosing between the two, such as junior Henry Kam and his family.

Kam, an early subscriber of Netflix and former user of cable TV, realized over time that his cable TV subscription was becoming too expensive for what it was to him and his family, and eventually decided to terminate it. Despite his choice, he doesn’t believe one is a replacement for the other.

“There’s services available on cable that aren’t necessarily on Netflix, such as live TV,” Kam said. “If you want to watch a football game, you can’t really watch it on Netflix because Netflix only has prerecorded films. But there are upsides too — [Netflix] is more efficient and more accessible in terms of skipping and playing certain episodes, and there’s subtitles … [for] cable, you need an actual TV screen, but with Netflix you can watch anywhere.”

Junior William Huang also faced a similar choice. However, he and his family ultimately decided to keep their cable TV subscription because of the live sports coverage that wasn’t available anywhere else.

Govindaraju believes that as streaming services like Netflix expand in popularity, more movies will be released on Netflix instead of in theaters. In fact, Govindaraju speculates that Netflix is transitioning away from a software company into a company more focused on entertainment and film production.

“At this point, they’ve already become codependent on Amazon to keep their content,” Govindaraju said. “[As for] their software, I would say there’s not a lot further that they could go, at least at this time, so the only way to build market share would be to start going to targeting entertainment itself.

So far, Netflix has created a strong presence in the entertainment industry, with the release of many popular Netflix Original TV series like “The Witcher,” “The Mandalorian” or “Stranger Things.” Huang believes one reason for these shows’ rapid success is because they all carry the Netflix brand.

It helps Hollywood in such a big way, giving actors and people a place to get their name out instantly.”

“Their original content [is] actually pretty good, like ‘Stranger Things,’ and there’s a reason why those are pretty good shows — they’re produced by Netflix,” Huang said. “Netflix is actually getting a pretty large platform now. More people — the industry as a whole — are depending on Netflix to put their movies on Netflix because it allows them to reach a larger audience.”

Govindaraju agrees that Netflix’s increasing influence is gradually changing the entertainment industry. He says Netflix is becoming a platform for more actors and movies to easily debut online and predicts that in the future, the company will “subsidize” Hollywood rather than compete against it.

“They pretty much changed everything with streaming their Originals, like releasing movies now online, not even having to get a DVD [to watch them],” Govindaraju said. “I feel like it helps Hollywood in such a big way, giving actors and people a place to get their name out instantly.”