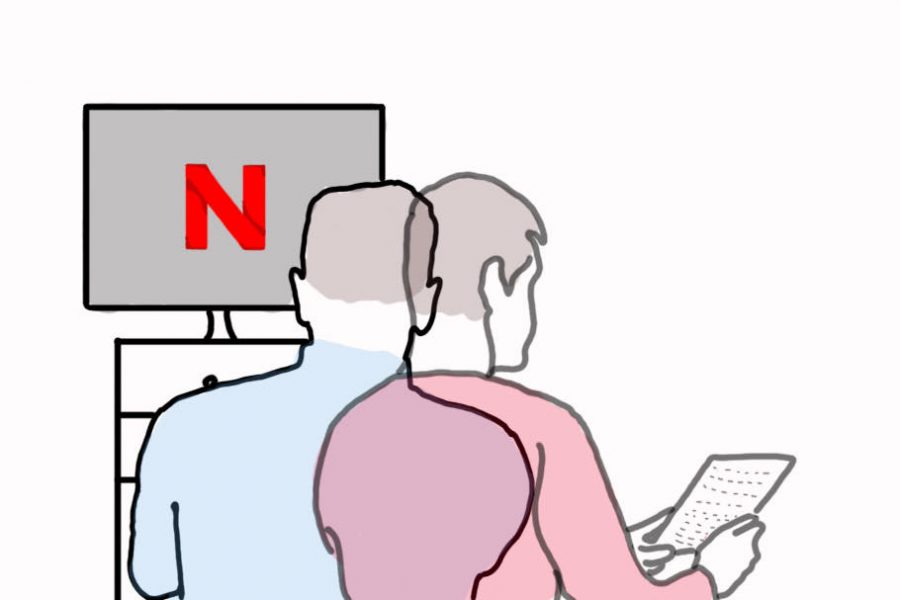 Students and faculty share their opinions about binge-watching shows

Known for its wide variety of on demand shows, Netflix often attracts consumers because it provides full length seasons with multiple episodes of shows. Oftentimes, these shows are reruns, allowing for consumers to get exposed to shows that aired on cable in the past. This freedom for the audience has encouraged the concept of “binge-watching,” the practice of consecutively watching multiple episodes or seasons of media, usually in one sitting.

Junior Aditi Singh, who has been subscribed to Netflix since seventh grade, originally didn’t understand the idea of binge-watching, but after discovering shows she became interested in, she immediately found herself constantly watching them. Singh recalls specifically watching three seasons of the show “Lucifer” in just two days over winter break. She’s also binge-watched “Vampire Diaries” and “Gossip Girl.” Even though Singh doesn’t binge at school, she finds herself doing so at home, which serves as a distraction for her.

“During school I’m pretty good at staying off of Netflix,” Singh said. “But at home I get really distracted, especially when I’m trying to study or do homework, [so] I’ll always be like, ‘I can take a 20 minute break [and] watch one episode or half an episode,’ but then it always turns into a couple hours where I’m just watching Netflix.”

Unlike Singh, sophomore Jana Woo doesn’t see Netflix as a major distraction. Woo often binges on Netflix while doing her school work that is boring or repetitive. Woo recalls watching the show “Gossip Girl” in the two weeks of winter break last year, and says she’s also binge-watched “Friends,” “The Office” and “The Chilling Adventures of Sabrina.”

According to Woo, there are different levels of binge-watching — during vacation times such as break, she can watch multiple episodes and even seasons in a day for an extended period of time, whereas on school days she aims to only watch one episode of a show per day. Woo believes that if Netflix is really negatively affecting people’s productivity, they can simply counter the problem by deleting the app. But even when she has a test the next day, Woo finds herself watching Netflix if she’s really bored.

“If I feel very unmotivated to do my homework sometimes, I like watching Netflix [while] I do my homework because it keeps me focused and more awake,” Woo said. “[Then] I’m multitasking rather than doing [just] homework because it gets a little bit heavy of just reading and problem solving, [so if] I have something entertaining, at least for me, it makes the time go by faster.”

Similar to Woo, science teacher Julie Choi explains that she often binges cooking shows as a form of background noise while she’s grading papers. Aside from cooking shows, Choi also notes that she has binge watched Korean dramas as well. Choi links her binge-watching to her impatient personality where she needs to know the ending, which she believes may lead to a slight addiction.

Choi’s favorite memories of binge-watching involve the moments she shares with her friends. Discussing re-runs of shows she and her friends were binging allowed Choi to keep in touch with them and connect with them despite all being in different locations.

“A lot of my friends in college are split up everywhere, so we used to [watch] ‘Suits’ on Netflix together and then [decide], ‘Hey, let’s talk about it,’” Choi said.  “This one day we had this huge video chat of seven people [talking about the show].”

Even though the shows are enjoyable, both Singh and Choi explain how they’re often reluctant to stop binge-watching — emphasizing that the best solution is to completely avoid starting new shows during busy times. Specifically for Singh, she stresses that the academic rigor of junior year has motivated her to save shows for break or summer, when she’s willing to give more time to watch shows.

“Even during break, everyone has some sort of work to do and [binge-watching] still becomes a huge distraction,” Singh said. “It’s hard to completely pull away from [binge-watching]. I’d rather stay off of it, but sometimes I just can’t help myself.”

Even though there are positives and negatives to binge-watching, Choi believes that because people usually can plan ahead and manage their time, there should be no negative stigma around binge-watching. Choi explains that binge-watching has given her life long memories and a way to keep herself awake and interested while immersing herself in work she has to complete.

“I think there [are] positive things to [binge-watching],” Choi said. “It helps pass time and sometimes it’s good background noise, but it is distracting in some ways. It’s like a question for me, like I can probably grade more efficiently if I don’t watch my Netflix but on the other hand, maybe I’ll fall asleep if I’m grading because I would be tired. So, I don’t know, it’s a juggle. It’s like everything — I think there’s a medium you have to find.”