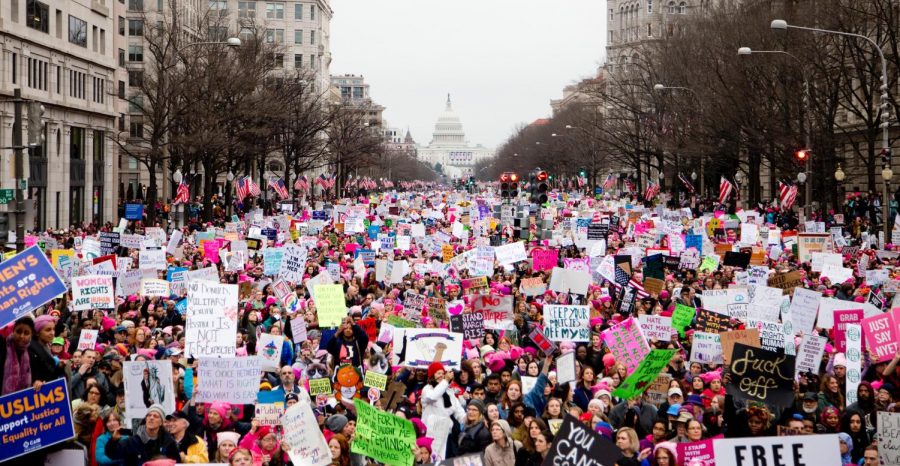 Photo by Vlad Tchompalov on Unsplash

Women’s protest in 2017 on Pennsylvania Avenue.

On June 4, 1919, Congress passed the 19th Amendment, which — for the first time in U.S. history — gave women the right to vote. Two months later, on August 18, the amendment was ratified by Congress. The amendment proclaimed: “The right of citizens of the United States to vote shall not be denied or abridged by the United States or by any state on account of sex.”

Despite the fact that this movement excluded the rights of many — including Native Americans, Asians and African American women — it significantly opened up the discussion about the importance of giving all people the ability to use their voice in politics. According to AP U.S. History (APUSH) teacher Bonnie Belshe, understanding what the the 19th Amendment means for voting today is one of the most important ideas she wants to convey to her students.

“What I want students to know and to understand is that the fight to get to the 19th Amendment was just that — a fight,” Belshe said. “You had to be diligent and militant with it. These women had to put their lives on the line in many ways. I want students to understand the importance of what happened historically, but also to see we need that today [because] voting is really one of the most important responsibilities that we have as a citizen.”

Board member of the League of Women Voters Cupertino/Sunnyvale Jean Lythcott asserts that the only way for this nation to move forward is through citizens taking control of their responsibility to vote.

“If the only people who are voting are the people who are corrupt and have hatred in their hearts, the nation is going to fall apart,” Lythcott said. “And the only way to stop it is for everybody to do their piece, stand up and make sure that the people who are making decisions in the nation at the city level, at the state level and at the national level are held accountable so that good people feel that they can run and get elected.”

Belshe recognizes that students may be unaware of the weight of the history of suffrage, which is why she asked the National Archives for the pop-up exhibit currently displayed in the MVHS library. The year 2020 marks the 100th year anniversary of the 19th Amendment’s ratification, and Belshe hopes that by having the display in the library, students will be able to explore the decades-long struggle that gave them the voting rights they take for granted today.

“I know that [the exhibit is] not something where students will just generally gravitate immediately towards,” Belshe said. “But as you spend more time in the library passing by, I think it has some interest, and so I hope that students will say, ‘Oh, what is this? What’s happening? Let me check out a panel at a time.’”

According to Belshe, the display in the library is a part of a concerted effort by the Social Studies department to increase student involvement in voting. As of now, Belshe explains that the importance of participation surpasses reasons that may contribute to low voter turnout.

People gave their lives for us to be able to vote. It is that important.”

The issue of low voter turnout prompted the passing of the California Voter’s Choice Act (VCA) in 2016. Only 37.54% of registered voters in California cast their ballot in the 2018 statewide primary election, according to a report published by the California Secretary of State.

Overall, the VCA consists of three major parts intended to make the process of casting a ballot easier. President of the League of Women Voters Cupertino/Sunnyvale, Tracey Edwards, explains these three parts: every registered voter in California will receive a Vote by Mail ballot, polling centers will be replaced by vote centers and same day registration will be implemented, meaning that people will be able to register to vote and cast their ballot on the same day.

For Edwards and Lythcott, increasing voter turnout is about making all people understand the importance of voting. The creation of laws such as the VCA  and the placement of the pop-up exhibit are part of the schoolwide, statewide and ultimately nationwide effort to encourage people to cast their ballot and use their voice.

The implementation of the VCA increased voter turnout by more than 26% in San Mateo County, and increased their average to more than 8% over the statewide average in the 2018 statewide general election, according to Edwards. To her, this dramatic increase in numbers proved to her that all the effort behind passing the act itself was worth it. Edwards also reflects on the role of teenagers in helping propagate changes.

“Why do you care?” Edwards said. “Because it’s going to be in your future when you’re 18. So you pre register and you start to be thinking about it. So once you’re pre registered you’re going to be on the rolls, things are going to be sent to you. But what you get to do is not only learn about all of this, but you get to tell your parents [about voting changes] if they’re voters.”

In addition to the League of Women Voters, other organizations have created several initiatives to increase teenage voter participation. These include registering all eligible high school students in history classrooms in their junior year and introducing them to Voter’s Edge, an informative website that prompts voters to enter their address in order to provide them with information regarding measures and candidates on their ballots for the next election.

“I, as co-director of voter services and the League of Women Voters, three or four years ago, set a goal [that] we would register 100% of Palo Alto teens [to vote] in that year,” Lythcott said. “We registered 1,100 teenagers and we try to say to students in class, ‘What young people need is inspiration.’”

Since 2016, more than 200,000 teens have registered to vote in California. Yet, a mere 27.5% of teenagers actually voted in the 2018 general election, according to the same report by the California Secretary of State. Lythcott wants teenagers to understand that now is the time to make a difference greater than the efforts of the previous generation.

I need for teenagers to know that power is inside you. You can take it, you can step up, you can lead.”

“We need to give it over to teenagers and young people who know what’s going on in the world and who can take it on in ways that we would never even think about,” Lythcott said. “What we try to do when we go and speak to people to get them to register to vote is to inspire them, or hope to inspire them to reach beyond themselves. I need for teenagers to know that power is inside you. You can take it, you can step up, you can lead.”

Belshe agrees with Lythcott’s stress on the manifestation of the individual’s power through voting. In promoting a passion for civic involvement, Belshe recalls her attitude towards voting after the first major federal election following the September 11 terrorist attacks.

“There were rumors going around of, ‘What if there’s going to be another terrorist attack? Should we delay our voting?’” Belshe said. “And I remember telling a friend of mine, ‘I don’t care if I have to crawl across broken glass and nails on my hands and knees and staple my vote to the courthouse door, my voice will be heard.’ I want students to understand that you have to have that kind of passion about getting involved and voting is the best way to do that.”