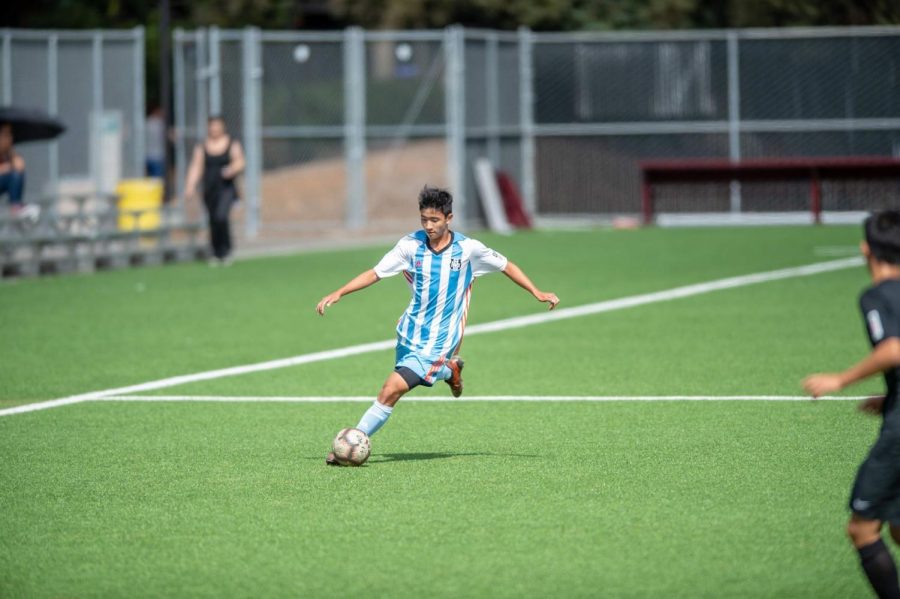 Captains on and off the field

View below to read three different perspectives of different members from MVHS being leaders in a variety of different groups — one including having a leadership position on a sports team.

From dribbling the soccer ball across the field for one of the best Development Academy U19 soccer teams in the nation to leading the school as ASB president, senior Brett Park takes on leadership roles in many different aspects of his life.

Despite having multiple leadership roles now, as a kid, Park initially believed that he wasn’t fit to lead. He would keep his ideas to himself.

“I think as I’ve grown into my own person, I realized where I stand amongst everyone else and realize I can actually contribute to a group,” Park said. “I always decide to put myself out there slowly but surely, and that’s just developed into me.”

Although Park is not an official captain of his club soccer team, he believes he still acts as a leader through leading by example in terms of his work ethic and willingness to try new things.

Despite both of these leadership roles, Park recognizes that there are huge differences in his role as a leader on the soccer field and at school.

Park believes that while in leading the soccer team, he only communicates the 11 players on the team and playing. In contrast to being ASB president, he notices that there is a trickle-down effect — he initially comes up with a plan with his ASB peers, then they tell leadership commission groups and the whole class and it goes on from there.

On Park’s soccer team, he views everyone as a leader in their own way.

“Everyone on the team has a certain place that they’re trying to help each other and foster a very competitive nature in practice,” Park said. “So everyone is, in a sense, their own leader, whether it’s when you’re on the field, in a position or in your specific spot, you’re helping the backline be in line and helping the midfield stay in shape.”

Although Park is unable to differentiate distinct differences between leading on the field and on campus, he believes both leadership positions help him improve. He is able to take lessons from soccer and implement them in school and vice versa.

“Whether it’s like my work ethic, or personality-wise, I learn how to be vocal on the soccer field and transition [that aspect] to school, but I also [take lessons] of what I have from school and transition that onto the soccer field,” Park said. “[For example,] maybe being a bit more extroverted, delegating responsibilities and taking responsibility for other things that aren’t just my specific role.”

For basketball, Tien found himself focusing less on how he did in the game individually and more on how he could improve his team as a whole.

“The captain’s thinking, ‘What can I do?’ Not individually, I don’t have to score this many points, [but more] how can I make other players better?” Tien said. “How do I make my team better as a whole, and there’s a lot of different situations for that.”

As Tien continued to think about how he could help his team improve, he found himself trying to lead by example and taking on the small tasks other players weren’t eager to do such as playing defense, working hard in practice and communicating to make sure his team was on the same wavelength.

“Personally, I always like to make everyone feel good about playing when they’re on the court because confidence really [acts] like magic when you play sports,” Tien said. “In order to be a good leader, your team has like playing with you.”

As a freshman class officer, Tien saw that the dynamics of the two roles were largely different, especially the way he had to communicate with his teammates/officers.

“When you’re leading as captain it’s just you and you’re just thinking as one,” Tien said. “But then in academics, leading in [freshman] class office and TEDx, [the whole group] has to think as one person. So although there might be like five people, you all have to be on the same page exactly. I think that’s actually harder.”

With Tien’s experiences in leadership roles, one of Tien’s most important lessons is how he responds to criticism or mistakes.

“Even though I might not have made a decision, I always took the blame for it,” Tien said. “You have to think for the team so that everyone’s on the same page. You have to act like you’re the [group] so that even if you didn’t make that decision, you’re part of it, so I [would] take the blame because the worst thing you do point fingers at each other.”

For teacher and coach Jodi Johnson, teaching in a classroom and coaching on the field have similar applications. Johnson has been coaching the MVHS varsity softball team and cross country team and serves as an art teacher at MVHS since 2007.

While Johnson is an authoritative figure, she tries to help all her students holistically by using the skills she builds in the classroom and gains from coaching.

“When I coach, I think I’m really similar [to when I’m teaching],” Johnson said. “I try and be constructive in my criticism, I try and build people up while trying to get them to learn different materials.”

According to Johnson, the key difference when teaching students in the class versus athletes on the track is the extent to which she gets to know the students.

“We [teachers] only have [time to teach students in the classroom] for maybe 45 minutes a day, and then you may not see them again,” Johnson said. “But in Cross Country or in [other] sports, you spend a lot more time with [the athletes]…you see them every day, you interact [with them], you ask questions a little bit more [than you would with students in the classroom].”

Johnson also mentions that motivation is another differentiating factor when teaching athletes compared to students.

“I think the difference [coaching the cross country team specifically] is that everybody or 99% of the people that are there is because they want to be there — no one’s making them do it,” Johnson said. “Having everybody wanting to be there is different than teaching in class — not everybody wants to be in art as some of them are taking it for their Fine Art elective credit. When you have a group of students who want to be doing something, it’s really easy to lead.”

Despite differences in terms of leading a sports team and an art class, Johnson believes there are overlaps.

“As a coach, I think you have to be able to encourage and inspire,” Johnson said. “I think being able to teach specific skills and develop the passion in the athletes to work on those skills is important. Is that the same in school? Well, I think you get that same thing in students who really want to get better at drawing, so I think they cross over.”