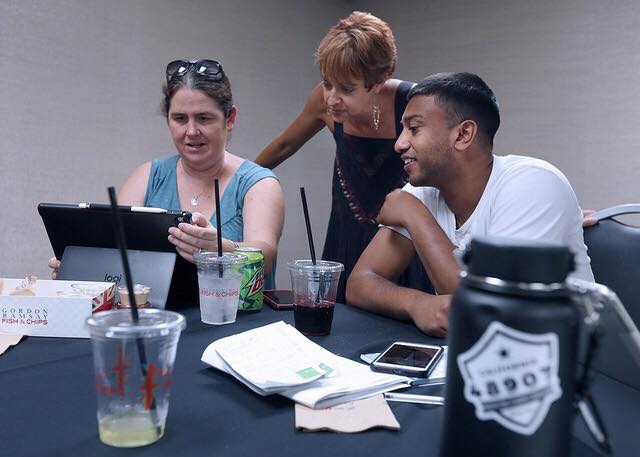 Hear Us: the experts

Hear us: the experts

“How important is free speech to journalism?”

At this point, she paused, then admitted, “I don’t have a better way to say it.”

In 1977, California passed the California Education Code 48907, granting student publications the right to freedom of press, protecting student journalism from prior restraint and censorship, as well as preventing administration from exerting influence over student publications. She has organized several programs to educate school staff, administrators and faculty on student press rights and highlight the importance of the Ed Code.

The school publication Nichols is an adviser for hasn’t had problems with censorship from administration. However, when hearing and reading about censorship in professional media, adviser email groups, message boards and through personal contact from colleagues, Nichols believes that if school administrations do try to restrain student publications, their priority is to maintain a respectable reputation for the school, which may sometimes clash with the fundamental purpose of journalism — to tell the truth.

“[Administrators make] a lot of decisions out of fear,” Nichols said. “They’re afraid of stories that are going to make the school look bad. Like, ‘We have a building that’s falling apart,’ or ‘We have a teacher who was arrested for having sex with a student,’ or ‘We have a drug problem’ or ‘Our sex education classes are really falling short. Kids don’t know the right reproductive health things and they’re all getting pregnant.’ They fear what is going to make them look bad.”

Nichols emphasizes that these decisions don’t carry malice; in fact, they are well-intended. Administrators care for the students, but they also have a protective viewpoint that considers the worst case scenario and thus tries to minimize risk or harm. According to Robert Solanga, a criminal justice and public safety reporter for The Mercury News, free speech in professional journalism is being threatened by the “fake news” movement, which he says the president reinforces.

“To find the courage [to report on topics despite public criticism], we just remind ourselves what we’re doing, why we’re doing it and that our job is for our community,” Solanga said. “The story is most important — to the readers and the community. That’s our obligation and we have to try to fulfill it as best as we possibly can, even in the face of adversity. That’s just part of the job — if you go into journalism with the goal of being ‘liked,’ then you’re going into the wrong profession.”

Unfortunately, with student journalism, Palo Alto HS journalism teacher Paul Kandell, who is an adviser for Verde Magazine and The Paly Voice, says this fear of losing control results in figures of authority enforcing prior restraint and censorship.

“If your attitude is that everything has to be perfect and controlled all the time, you’re probably not going to be very comfortable with a living student press or even a living professional press inside your community,” Kandell said. “I always say and hear in journalism that if you’re not pissing people off, you’re not doing journalism right. People often have to accept the professional press, but maybe with a student press, they think that they don’t have to accept them. Luckily in California, they do.”

According to Nichols, administration’s censoring or restraining stories is detrimental to the school community, as it results in failure to cover important issues, which are pushed aside to protect the school’s “good name” instead.

“[Admin] don’t want public scrutiny, or they don’t want attention drawn to problems that they don’t know how to solve, or maybe don’t have the means to solve,” Nichols said. “So they say, ‘Well, we’ll just push that under the rug, and the way to do that is to prevent students from writing about it.’ Of course, the sad thing is it doesn’t stop students from talking about it. So it doesn’t ever really stifle the story, but it does always stifle the learning.”

In a professional environment, his editors and publication have never prevented Solanga from publishing a story, so long as it is well-written, accurate and balanced. However, as a criminal justice reporter, he is required to report on unflattering things about his sources, who may be accused, charged or convicted of crime.

“Even though they’re in jail or in trouble or at court, they see news media coverage has a detriment, whether it’s a case or they just don’t like their friend, loved one, client in an unflattering light,” Solanga said. “There will be pushback there but we push past that.”

Even the government agency of a police department or an attorney’s office, Solanga says, has rarely stopped stories from happening, simply because government agencies know that free speech and freedom of press are both protected by the Constitution. In Nichol’s experience, more democratic states, like California, have more legislation in place to protect student journalists, with a state’s political landscape often determining the amount of freedom student journalists have. However, Nichols cautions on equating student press rights to party affiliation.

“Sometimes it’s political, and if the political landscape of a state is heavily conservative, that sometimes comes with more restrictions on student expression, but it’s not always that way,” Nichols said. “I certainly don’t want to say it’s a blue state red state issue, but sometimes those things go hand in hand.”

“I feel that if students are talking about something, they care about it,” Nichols said. “If they care about it and if they’re worried about it, or curious about it, that means that they really should be covering that story. If it’s a sensitive subject, it’s probably all the more relevant.”

For example, Nichols believes sex is an engaging topic that needs to be addressed by students. While the professional media may cover the story different from a student publication, the students’ coverage will be most engaging for teenagers. Kandell also supports his students in covering all topics of student interest, but he hesitates with stories on suicide and depression, because of the potential emotional toll that reporting on these darker topics may have on his students. However, he understands that these more sensitive topics are important to cover, which is why he still supports his students in executing these stories.

“I’m sensitive to the emotional issues that reporting can bring into my students’ lives and I’m not in a hurry to ask them to immerse themselves in those things because I know that the impact on their lives can be harmful or challenging,” Kandell said. “But some of our best reporting does come out of these more emotional topics and it is a challenge for students to do that reporting, but they are up to it.”

While it may be challenging to cover such sensitive stories, such as those on violence and suicide in schools, both Kandell and Nichols are there to make sure the reporting is at a professional level. Nichols believes that advisers have the responsibility of guiding their students towards high-quality content, so they simultaneously report on difficult topics and uphold journalistic integrity.

“If the adviser instills [good journalistic] principles and gives [students] the tools to decide and do the critical thinking of how to tell the story, then I think however the students do that, that process is every bit as ‘good’ as what professional media can do,” Nichols said. “Students do an amazing job when they’re empowered to do so, and they’re going to do it in a way that’s relevant for teenagers, so it might not look the same or draw upon the same focus or use the same sources as the professional media, but it’s going to meet the needs of their audience.”

While Nichols believes in journalism’s power to catalyze change, her viewpoint is contrary to the current political climate, in which Nichols explains that the value of both student and professional journalism is being undermined.

“Journalism diffuses some of the bad and sheds light on the real and sets the record straight,” Nichols said. “[It] helps us gain exposure to problems we didn’t know existed and then provide the context and the background that’s essential to us understanding those problems and the root of those problems so that we can work toward solutions. I think it’s really the key to modern civilization.”

As a “watchdog,” Nichols says that journalism holds truth to power, keeping authority such as elected officials accountable. However, the potential, informative influence of journalism can only be accomplished through free speech, which Solanga describes as the only reason why reporters aren’t afraid of being arrested for something that they write.

Solanga believes that without free speech, democracy would fail. Unfortunately, in this digital age, Nichols has seen a circulation of this very misinformation and  — although she despises the term — fake news. However, she believes that journalism is a counter attack on this inaccurate news. Kandell agrees with Nichols and Solanga, believing the right to free speech and press prevents journalism from losing meaning and becoming a superficial platform of lies.

Correction 1/09/18 (12:30) p.m. A previous version of the story that appeared on Feb 1. incorrectly stated that Sarah Nichols’ role as the president of Journalism Education Association involves upholding the Ed Code and offering legal and ethical advice to student journalists. However, Nichols is trained in journalism and education, and does not offer any type of legal advice. Our story has been updated to reflect these corrections.

Correction 1/09/18 (12:31) p.m. A previous version of the story that appeared on Feb 1. didn’t clarify that Nichols herself has never had any issues with administration at her school. Our story has been updated to reflect these corrections.