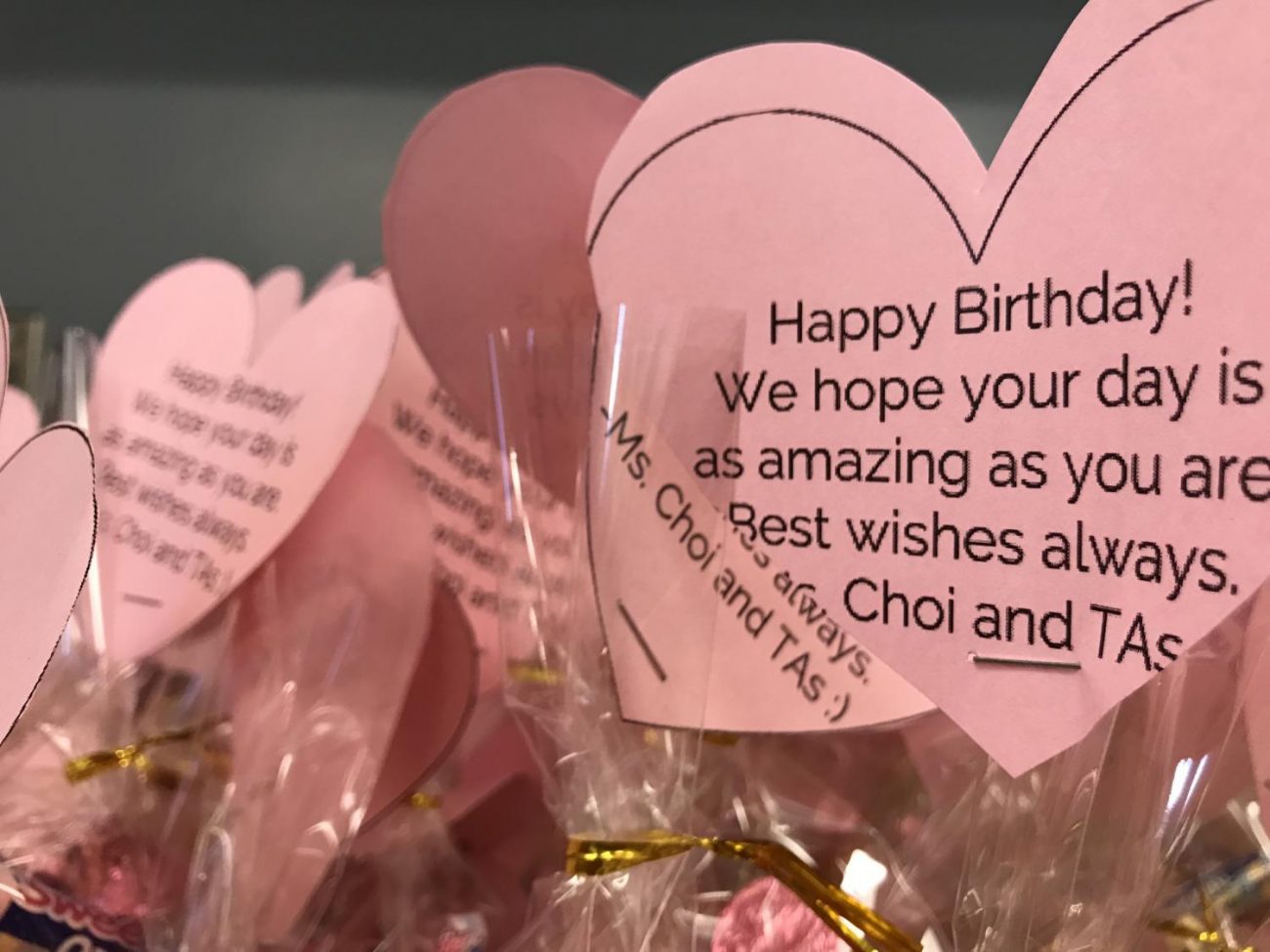 A funhouse for all: Science teacher Julie Choi implements stress relievers in the classroom

The latest pop music echoes through E101; the room thumps. A crowd of rowdy students huddle in front of the projector playing Nintendo Switch, their fingers deftly sweeping over the controllers. On the desk sits a tray of goodie bags adorned with heart shaped cutouts to be gifted to students on their birthday. On a shelf sits a stuffed bear, the first of a coming collection that will make up a stuffed animal corner.

Physics and chemistry teacher Julie Choi implemented these stress relievers at the beginning of second semester for student support. As a teacher, Choi believes that her role is not only to provide academic support and guidance, but also social-emotional support.

By offering an outlet for her students to de-stress, Choi wants to foster community in the classroom. Choi says that when she attended MVHS as a student, she was sometimes fearful of her teachers because they were “authority figures.” She sympathizes with students, wanting to present herself as an approachable person.

Senior Daniel Budziwojski is grateful for Choi’s effort in supporting students. He feels that she has gone “above and beyond” in her role as a teacher.

“I think it’s actually really wonderful and very thoughtful to think about something other than just academic focus of students,” Budziwojski said. “Rather than trying to help them academically, she’s also trying to relieve stress.”

Sophomore Grace Kuo, who is in Choi’s sixth period AP Physics 1 class, agrees with this sentiment. Kuo believes that bringing in these stress-relievers reinforced what she already felt about Choi being kind and understanding.

“It makes me feel very welcomed,” Kuo said. “It also makes me feel understood because these are all the things that I wish for when I get stressed out. I want to play with something when I’m stressed.”

“I don’t think it would be a distraction because a lot of students just do problems by themselves because you’re in a classroom so you’re applying things at school,” Kuo said.

“I feel like you could relieve stress while you do work by yourself; it wouldn’t be a distraction.”

Budziwojski admits that the idea of stress relievers acting as a potential distraction has crossed his mind. However, with it put into practice, he doesn’t see it to be much of a problem.

“I find [that] it [is] being used with moderation and it’s really there to help students,” Budziwojski said. “I haven’t really seen [that privilege] abused. It’s not like you can just take out a Nintendo Switch and just play it in the middle of class. It’s still very structured. It’s just there to aid you, especially during those tutorial sessions and cram sessions, when you’re just working through a bunch of physics problems before a test.”

Choi herself was also slightly worried about bringing a video game into the classroom. However, she checked with her department lead, Pooya Hajjarian, who agreed with it. She also sees it as an educational opportunity.

“I guess it’s a trend for classrooms to bring in these kinds of things to motivate students for educational reasons,” Choi said. “And so that might be something I might be searching up during the summer. I’m thinking maybe when the Smash characters collide into each other, like the way that they fall, must have some reason.

I’m not 100 percent [sure]. But it’s something that I would love to explore.”

Above all, Choi wants to build teamwork through having the Switch, as many of the games are team-based, such as Overcooked and Super Smash Bros. She hopes that students will get to know different people and learn collaboration, important skills in AP Physics 1.

She also feels that the Switch can provide a medium for more communication and interaction between people. For example, some of her students from previous years whom she hasn’t talked to in a while have come to her classroom because of the Switch.

“There’s this community that’s building around the Switch system and the stuffed animals, [with] some people offering to donate their stuffed animals,” Choi said. “It gives students more ownership of the classroom and it makes them feel like it’s really theirs to change. If they can change it in those small ways, they can change it in other ways too. We can improve the class together.”