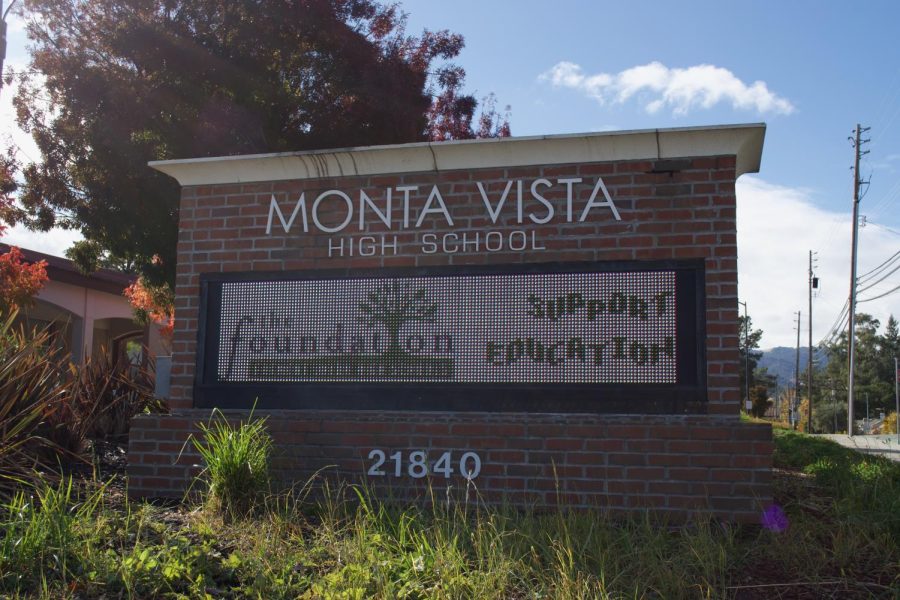 The MVHS sign by the bus circle displays a message promoting the FUHS Foundation.

The majority of the Foundation’s funds come from parent donations and corporate matching, as well as from realtors, corporate and community sponsors. The Foundation also hosts an annual spring fundraiser, during which they bring the community together and spread awareness about their cause.

After allocating an equal amount of money for programs at each school — including journalism, art, robotics, Schoology, Naviance, mental health support services and more — the Foundation also supplies additional grants for programs to teachers who request them. Allen notes that the team of volunteers at the Foundation work with the district to identify areas where funding may be necessary.

“The way we decide which programs to fund is by (1) staying within our parameters, and (b) working with the District to see where the needs are,” Allen said.

Foundation board member Srikant Sharma also highlights a team-focused aspect of  the process of selecting programs.

“There’s also a board process where we make sure that all points of view are discussed, heard and voted on,” Foundation board member Srikant Sharma said. “There is often unanimity, but always collaboration, in terms of the entire board itself.”

Fremont High School’s journalism program is one program which the Foundation supports. Advisor Emer Martin highlights how grateful she is for the two thousand dollar donation the Foundation provides to her publication. However, Martin acknowledges that without donations from other organizations, such as the Assistance League of Los Altos, their publication would be unable to operate at the extent that they’d like to.

Like Martin, while FBLA Vice President of Operations and Marketing and senior Vidusha Adira is also very thankful for the support FBLA receives from the Foundation, she wishes they could receive more funding from beyond the Foundation.

Adira explains that because FBLA is a national organization, most of its trips are organized through California’s FBLA chapter and through the district. After CA FBLA and FUHSD have registered all the hotel fees, plane tickets and other expenses, the club has to reimburse the district, even if not all club members are able to pay their individual expenses. To Adira, this system is unsustainable.

“I wanted to start applying for grants this year,” Adira said. “The problem is that there’s not much [reason] that we would need these grants compared to a less fortunate district just because, overall, they expect us to be able to pay for stuff because of our average income. So I’m thinking of applying to them, but I don’t think we’ll get much funding.”

Allen acknowledges that programs often need more money than the Foundation can provide. At the same time, the Foundation has to remain fair to all the schools and all their programs. She recalls journalism programs applying for grants in the past, but because the Foundation can’t give more money to programs they’ve already funded, they gave support through buying advertisements instead.

Allen is also hopeful that these programs will receive more support from beyond the Foundation. While their organization’s goal has always been to provide funding to organizations which are not supported by the district, a proposition on California’s 2022 General Election ballot has the potential to make that role less of a necessity.

According to the text of the proposed law, Proposition 28 aims to provide funding for arts and music education in all public schools and charter schools across the state, with schools in low-income communities receiving additional funding. The proposition declares that art and music is “an educational priority worthy of the state’s [support].”

“I hope [Proposition 28] passes,” Allen said. “I voted yes. [Art and music are] so important, but those are the things that are not well funded, so those are the programs we support.”