Why we should stop using the word “hate” 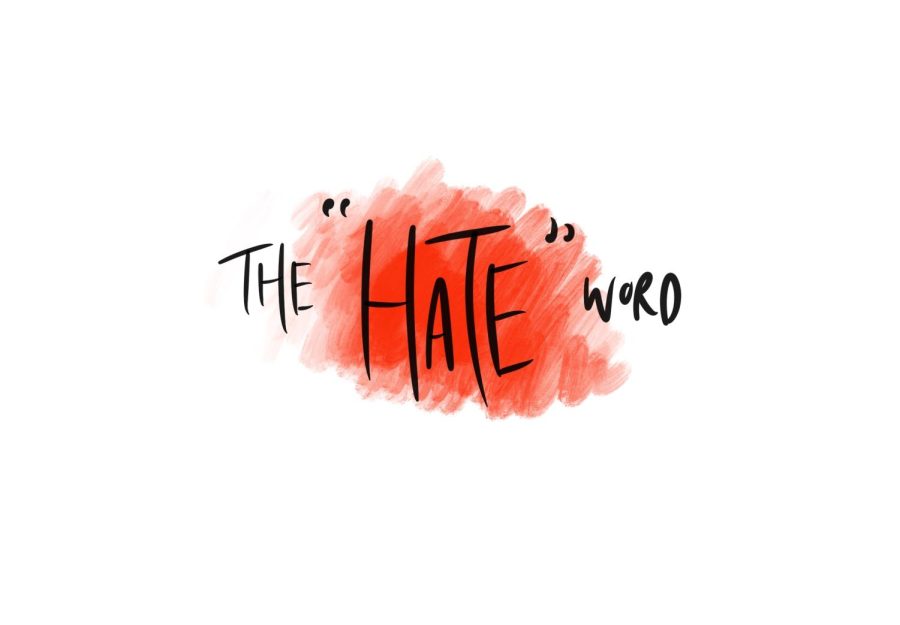 I hate the word “hate” – and yes, I’m aware of the irony of that statement, but more on that later.

I’ve never really said bad words, mainly because I’m Christian and I feared that swearing meant I’d be struck down by a fiery meteor into the shadowy depths of hell and never escape again. In particular, I’ve generally tried to avoid using the word “hate” – which isn’t a swear word but nevertheless something my parents chided me not to use. Whenever I say it, it gives me the heebie-jeebies and I get the uncomfortable feeling that Jesus is about to descend from the heavens and chase me down with a sharpened butter knife.

Jokes aside, using strong language, especially toward others, has always made me uncomfortable – and “hate” is no different, especially because the word can be so misleadingly used.

There’s such a large disparity between the words “dislike” and “hate.” Dislike implies that there might be some animosity or that maybe some people just don’t click with each other. You might dislike the person whose rolling backpack you tripped over during a passing period (God knows we’ve all been there), or perhaps the person who snatched the last Chicken Tikka Masala in the lunch line. You might be mildly annoyed, maybe even angry.

But hate. Hate is different. Hate implies emotional investment. Hate requires genuine time and effort; it’s something that drains you. Hate is when people of southeast Asian descent experience xenophobia during the COVID pandemic. Hate is when African American protestors are targeted during a peaceful march. Hate should be a word that makes you uncomfortable – the word worthy of making me worry about Satan ascending into the mortal plane to drag me back down with him.

Yet we’ve watered it down into a word used in our common everyday life for the most menial of tasks.  “Oh, I hate it when my parents don’t let me go out with my friends” or “I hate it when our teachers put all our tests on the same day.” I’d know – I’m guilty of it too.

But as the use of “hate” increasingly permeates our daily rhetoric, the impact it has when it really matters starts to decrease. We cannot say “stop Asian hate” and “I hate doing homework” in the same breath, yet at the same time truly convey the struggles of an elderly man attacked at Chinatown.

It’s partially due to the fact that what we see and hear has set the precedent for us. A study has found that Fox News used “hate” 647 times from January through May 2020 in daily four hour broadcasts, meaning that they used hate almost once every hour. This doesn’t even include the dozens of times you hear it within the 15 minutes of standing in the lunch line or while standing outside your math classroom listening to other people complain about their grades.

Another possible reason is that “dislike” might feel too weak a word to convey your true distaste, and “hate” might feel too strong – but you can’t think of any viable in-between and we’d rather people over-interpret our distress than dismiss it. But we forget that by using “hate” we simply exacerbate the problem, by devaluing the very word itself. Soon, even “hate” will feel obsolete and we’ll search for an even stronger word to use, in an everlasting cycle that never ends. So instead of taking the easy way out, we should take the time to find a different way to phrase our grievances, one that doesn’t involve using a word that’s too strong for its context.

So to clarify, yes – I do hate the word “hate.” I dislike that it’s become a common word that denotes nothing other than a little discomfort. I detest that it has become so overused that we can use a word that’s supposed to refer to literal crimes for complaints about homework. We need to learn to be less lazy with our daily rhetoric, because our language has such a huge impact on how we perceive the world. You don’t “hate” your parents. You don’t “hate” dirty bathrooms. Reserve “hate” for when it truly matters.

I’m learning to be uncomfortable with the word hate. We all should be.