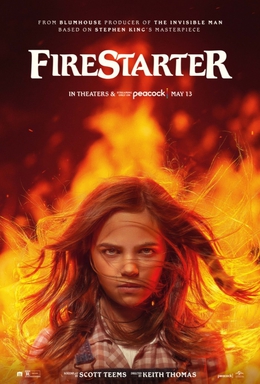 From the mind of author Stephen King and director Keith Thomas came a new adaptation of the 1980 novel “Firestarter.” Despite a fresh attempt at exceeding the initial 1984 movie adaption, the movie unfortunately falls into the same rut of monotonous patterns and a weak storyline. Released nationwide on May 14, the film seems to be yet another Stephen King remake that fails to live up to the novel.

The movie begins with main character Charlie (Ryan Kiera Armstrong) unlocking her telekinetic and pyrotechnic powers at school when she unleashes a fireball during a dodgeball match. In the following scenes, we learn that these powers are genetically passed down from her parents, Andy (Zac Efron) and Vicky (Sydney Lemmon), due to experimentation done to them by a shady government organization known as “The Shop.”’ The Shop’s leader and primary antagonist of the movie, Captain Hollister (Gloria Reuben), hires bounty hunter John Rainbird (Michael Greyeyes) to hunt down Charlie. After a series of fast paced action scenes, the movie culminates in a fiery, final showdown between Charlie and Captain Hollister.

Unfortunately, while the combination of telekinetic attacks and pyrotechnics displays should amount to stunning visual effects, the end result seems to be a far cry from audience expectations. The film was produced by Blumhouse Productions, a Hollywood production company known for notoriously low production budgets, and they seemingly cut as many corners as possible on the visual displays and graphics. For example, when Charlie’s dad is teaching her how to control her powers, the large explosions and frequent close shots come across as more cheesy than serious. This theme of various shots captured far too close recurs throughout the movie, with the result being confusing scenes that force audiences to decipher movie conversations.

Perhaps the film’s only redeeming quality is its electronic score, composed by artists Daniel Davies, Cody Carpenter and John Carpenter, which helps to create an element of horror and tension in the film’s opening scenes. The electronic music’s combination of sci-fi, deep beats and guitar produce a sense of realism that transports audiences to every scene. Moreover, the shift between slow piano ballads and fast paced sonic applications results in an appropriate mood for the movie’s various emotional scenes.

Yet, the film’s biggest issue seems to be a lack of pacing. Despite a short runtime of 90 minutes, the movie prioritizes featuring mundane walking scenes as opposed to any real scares. Noticeably, while Charlie and her father should be running for their lives from the government, they somehow still have the time to take long detours with loosely related scenes like eating sandwiches at an elderly neighbor’s house. As a result, when the movie shows a news reporter scene on the supposed “nationwide manhunt” pursuing the two fugitives, the supposed urgency clashes with the meandering pace established in prior scenes.

For true Stephen King fans, the “Firestarter” remake may prove to be even more disappointing than its initial 1984 production. In spite of an all-star cast and ample creative material, it seems true classics are sometimes better left on paper as opposed to being turned into yet another disappointing remake.