Exploring the effects of verbal and nonverbal communication in professional settings 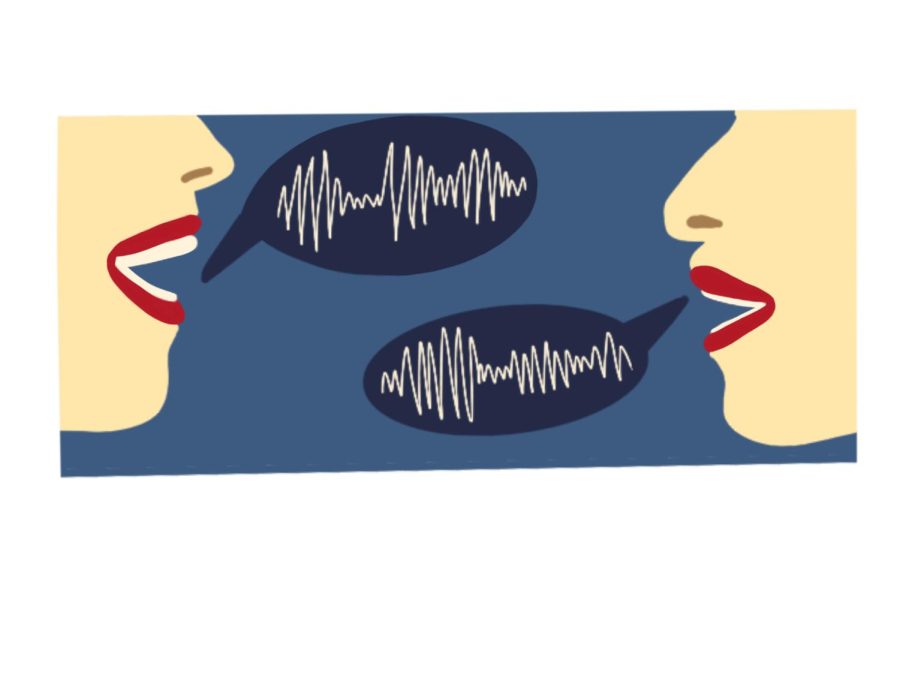 The methods of communication that people use — voice pitch, voice tone and body language — can affect the way people perceive professionalism.

“As human beings we’re social animals, right? We, for the most part, crave connection and being with others,” Seyer said. “And part of that, of reading voice tone and body language and all these other nonverbal pieces, we kind of do it like we breathe.”

Professionalism, ​​the “conduct, aims, or qualities that characterize or mark a profession or a professional person,” is determined by other people’s perceptions of that person. And according to Academic Communications teacher Ruth Seyer, many determining qualities are ones that the person themselves might not even be conscious of. The methods of communication that people use — voice pitch, voice tone and body language — can affect the way people perceive professionalism.

According to freshman Dahlia Schilling, voice pitch can play a strong role in people’s first impressions. Schilling participates in Speech and Debate and believes that her voice pitch affects how her judges and peers perceive her.

“I feel like a lot of people have told me I have a low voice. People have told me [that] I have a strong voice or [that] it’s scary. I think I’ve tried to combat that by, when I’m presenting, trying to make my voice pitch higher in a way,” Schilling said. “Going back to the stereotypes, I think [people think] higher voices are fun and people who are happy and perceived maybe as more girly even. And deeper voices are perceived as more masculine and scary and like, ‘I don’t care about anything,’ type of thing.”

In contrast to Schilling, junior Divya Subramonian has a higher voice. According to Subramonian, this makes people think she is easier to take advantage of.

“Whenever I’m in a group project, and I say, ‘Oh, let’s split up or give a suggestion of how we should split up the work,’ People think, ‘oh, maybe she’s not as strict,’” Subramonian said. “So then they think that they can do other parts, or like not do the parts that we agreed on doing. So I think just having a stricter or lower voice, I guess, would help people or cause people to take me more seriously.”

On the other hand, junior Arnav Kumar, who has a lower voice, believes that his voice pitch doesn’t play as strong of a role in professional settings. Despite that, Kumar notices he changes his voice pitch at his job at a pizza joint to sound nicer and more serviceable.

“Like at work I go about three or four pitches higher [than my normal pitch], you know, just to seem more serviceable,” Kumar said. “It’s not necessarily intentional, but just if you’re trying to be customer service oriented, then you automatically become more high pitched. If I’m serving somebody food, I wouldn’t use slang. I’d be like, ‘Oh, hey, how are you doing? Are you enjoying your food?’”

After noticing differences in people’s associations with high and low voice pitches, Subramonian believes that voice pitch may lead to a gendered discrepancy in how seriously people are taken in professional settings.

“Females are typically the ones with the higher voice pitch and that’s how [it is] anatomically speaking, but I guess because of that, they’re perceived as less professional,” Subramonian said. “And of course, we’ve seen examples of how they’re overlooked [career] wise … and they aren’t taken seriously. Typically males, they’re the ones who are taken more seriously and seen as putting their foot down.”

In the new series “The Dropout,” a miniseries on the rise and fall of Elizabeth Holmes, one of the key focuses is Holmes’ deep, baritone voice, which has been speculated to be intentionally lowered by Holmes from her natural voice. Here is a clip of Holmes where she allegedly uses her normal voice and quickly switches to a lower tone.

MVHS speech therapist Erica Kim agrees with Schilling and shares that Holmes’ change of voice pitch may not have been the ideal decision.

“I feel like it’s not necessary for you to change your pitch because there are so many other things that you can do to be presentable to look confident than that,” Kim said. “I think there just could have been other ways that she could have approached it a little bit better.”

Kim shares that she believes someone’s tone plays a larger role in how they are perceived. In fact, she believes that tone can be more important than the actual content of what someone is saying.

“If your tone is different than what you’re saying, people might perceive it differently,” Kim said. “So, for example, you’re giving a presentation and you’re really nervous inside, but your tone is very confident. People aren’t going to really know that you’re feeling nervous, right? On the other hand, if you’re trying to reassure someone that everything’s gonna be OK, but you sound nervous, they’re probably not going to really feel reassured by what you’re saying.”

In line with Kim’s observations, Subramonian described that she has changed her tone in order to influence how others view her. Similarly to how she brings her voice pitch up to seem more nice, Subramonian uses her tone to make her seem more approachable.

“Generally speaking, I have the tendency to want to be seen in the best light in the eyes of other people,” Subramonian said. “I really want them to see that I’m really interested in speaking to them. That I mean, what I say and I guess, just to portray my best self, I felt like maybe changing my tone would help. So over the years, I’ve just been changing my tone in order to be perceived as a kind person.”

However, according to Kumar, voice pitch and tone are not the only factors that contribute to people’s judgments in professional settings. Body language and other nonverbal forms of communication also play a large role.

“It’s not really necessarily what you say, it’s how you say it,” Kumar said. “When you’re giving an interview, or you’re just talking to people normally, having a conversation, it doesn’t really matter that much, the content and your words, but just how you’re reflecting and using body language.”

Schilling expands on Kumar’s observations by tying it to her experience in Speech and Debate. Although she believes that her voice pitch plays a larger role than her body language in people’s perception of her, she has noticed that her body language can affect how judges grade her.

“Part of the way the judges grade you is, if you’re swaying a lot, or you’re fiddling with your fingers, it kind of shows that you’re nervous or you’re perceived as less composed, so usually you’ll be ranked lower,” Schilling said. “I think in my case, I tend to move a lot when I’m talking or presenting and so I try to mitigate that and try to not move as much.”

Seyer suggests that learning to be conscious of these forms of communication can be beneficial when interacting with others.

“Because tone and body language is something that we [do] like we breathe, we don’t think about it a whole lot. But yet it’s such a powerful tool, in many ways,” Seyer said. “And when people learn to harness it and kind of think about it a little bit more and consider, ‘Well, what was my tone stamp sounding when I’m talking to somebody?’ It can make us much more powerful communicators.”