Looking into the recycling effort at MVHS 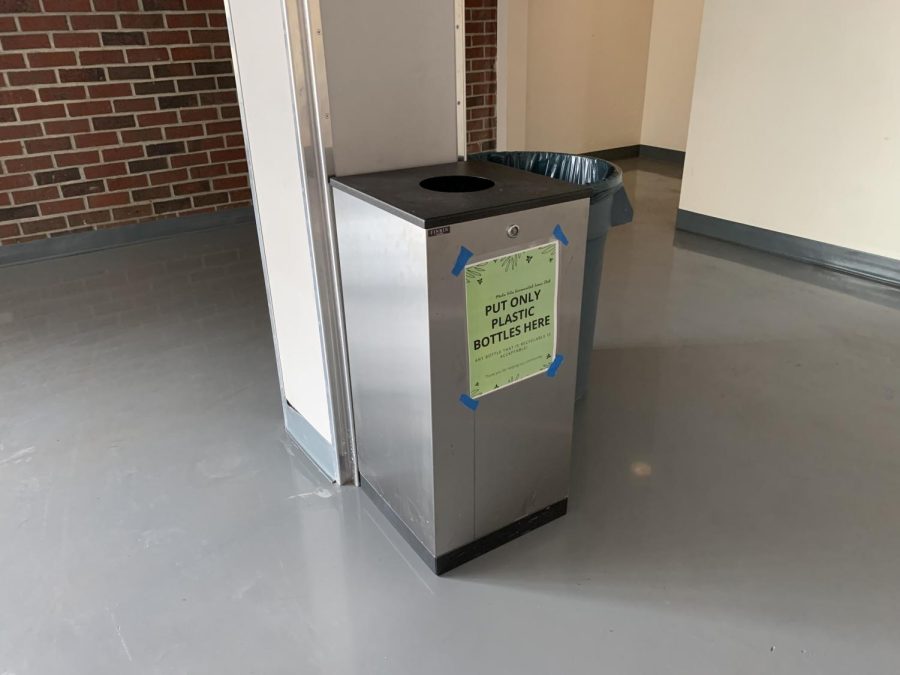 One of the two bottle recycling bins the Environmental Science implemented resides in the gym. Photo by Sophia Chen

Prior to working at MVHS, Facilities Manager Eddy Medal worked at Santa Clara University where students are trained to sort their trash during freshman orientation and are “big on recycling and composting.” As someone who worked as SCU’s sustainability liaison for the facilities department, Medal believes that the amount of landfill waste produced by MVHS is “alarming,” and that the school can do a better job at separating recycling from landfill.

According to Environmental Science Club President and senior Michael Ding, the club raised money to purchase the bins, and club members and other volunteers help empty the bins and replace the bags every day after school. While the gym bin has been collecting a lot of bottles, the club has faced difficulty with the Student Union bin, since volunteers need to sort out trash that has been incorrectly thrown into the recycling bin.

For the future, Ding hopes that the club can add more recycling bins on campus and to continue raising awareness about recycling among MVHS students.

“Part of the benefit of having these bins is not just recycling the bottles themselves, but also creating this culture where people actively look to recycle,” Ding said. “Because if we can educate people about it here, then for the rest of their lives, anybody that comes to MV will have this culture instilled in them of recycling, which will help out in the long run.”

Special Education teacher Lisa McCahill has also been working with the Environmental Science Club and Medal to aid in the recycling effort on campus. Besides passing along informational resources to teachers, she has also helped create and distribute labels for classroom recycling bins.

“So if you have a sign that we have here with specific pictures of containers and things, it just takes that one split second for students to see like, ‘Oh, OK, where do I drop this in?’” McCahill said. “And then naturally, it will become [a] habit. So definitely direct instruction about [recycling] could be one approach, and then also having just visually around campus signs that designate bins so that in a way, students see that this is a priority.”

Ultimately, McCahill believes that student involvement is crucial to the implementation of a successful recycling system.

“I can help lead the effort, but I need help,” McCahill said. “And if you have more students to buy into it, and then their friends see that they are thinking about where they’re going to put this container versus things that cannot be recycled. So students are like 90% of it. But like I said, I can’t force anyone to do it.”

Moving forward, Medal, Ding and McCahill are interested in implementing a composting system at MVHS. While Medal believes that people who are used to throwing away trash one way may have difficulty breaking habits, he believes that the school is “putting small steps to victory.” McCahill believes that educating students about recycling is also important for creating a more sustainable future.

“This is our earth and we need to take care of it,” McCahill said. “And since students are younger, it’s easier to kind of create new habits, versus older people who might be disposing of their waste the same way they always have. So if everybody can be taught to just get in the habit of sorting out their waste, then they will grow up to be adults who do the same. You guys are the future and then your kids are going to be the future, so if we can pass down those that priority, thinking about our environment, that’d be great.”