Looking into how racial microaggressions and bias affect student athletes 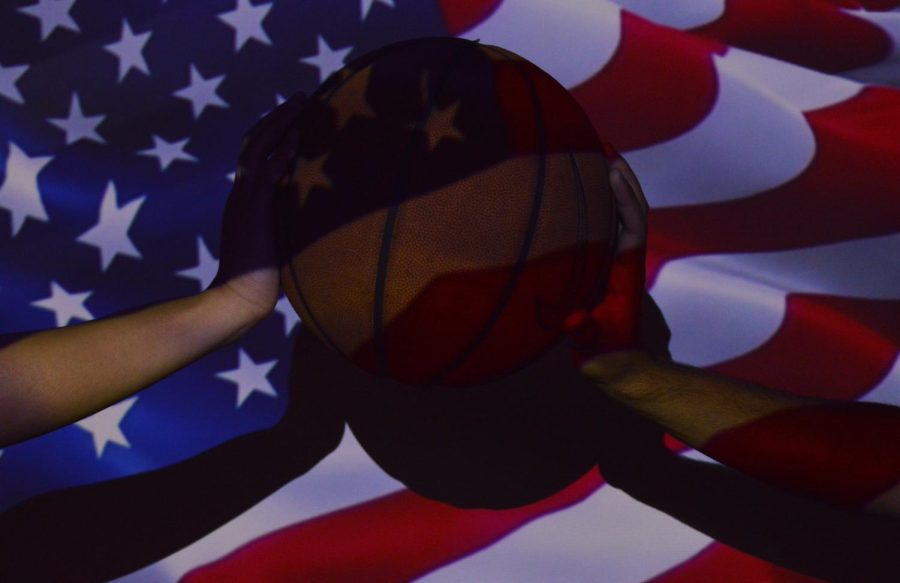 Two people hold a basketball with a projected American flag.

The first time senior Arthur Chan, who is Chinese, experienced a racial microaggression was at a school volleyball tournament where a couple of players made a racist eye gesture toward him and one of his teammates. In his experience, similar incidents occur more often when his club team plays against white-dominated teams outside of Santa Clara County.

“Those kids mostly come from households where there isn’t this discussion about racism or white supremacy and it kind of shows,” Chan said. “I’m not saying it’s the kid’s fault — part of it is, but it’s also a lot on the parents and society.”

Junior Philip Chiu, who is Taiwanese, also believes he experiences racial microaggressions when he travels to places with a smaller Asian demographic.

Playing club basketball throughout middle school, he recalls his team being called a slur against Chinese people or being asked “Can you even see?” He recalls being more surprised than angry by this incident and “tried not to think about it too much.”

“Obviously, it was just surprising to … hear [these words] in the first place,” Chiu said. “It would [affect me] mentally because I was wondering why they would say that. Is it whether it was because they don’t see Asians often in sports?”

On the other hand, senior Meenakshi Manoj feels like the fact she is Indian puts more pressure on her. She has done taekwondo since she was six, volunteered as an instructor throughout middle school and worked as an instructor since junior year — however she still feels out of place being Indian in a Korean-dominant sport.

As she worked her way up the levels and eventually attained a fourth-degree black belt, she noticed there were “less and less Indians” and people of other races and felt like people never took her seriously because of her ethnicity at her level.

Similarly, Chiu feels like his team gets underestimated by other teams as a result of its ethnic makeup which is mostly East Asian. He also feels that there may be racial bias when it comes to his experience with club basketball tryouts, which typically separate potential players into groups based on perceived skill to run through drills and scrimmage against each other.

“I would always start out at the lowest level … while other kids would always start in the higher [level] which are the teams where the coaches paid more attention [to],” Chiu said. “It [could have been because of my] race or it could have been height, even though I was much taller than or as tall as the players on the teams that [coaches] paid more attention to, I would always be put in the worst [teams] and then I’d have to work my way up.”

Chan believes there isn’t much that can be done about racism in sports at the high school level, but he can see actions being taken on the college and professional level as a possibility. One example he cites is an incident in which a Serbian volleyball player was banned from two matches after making a racist eye gesture during a game against the opposing Thailand team.

For Chan personally, he chooses to use these incidents to motivate him rather than let it affect his performance negatively.

“The more you play a sport, the more you understand you have to shut out the haters and use it as motivation instead of mental stress,” Chan said. “So I think I learned to do that more throughout especially these kinds of experiences — like it’s not just trash talking, it’s a lot more than that when it comes to these racial microaggressions. Just learning to shut out the noise and use it as motivation instead of having them get in your head.”