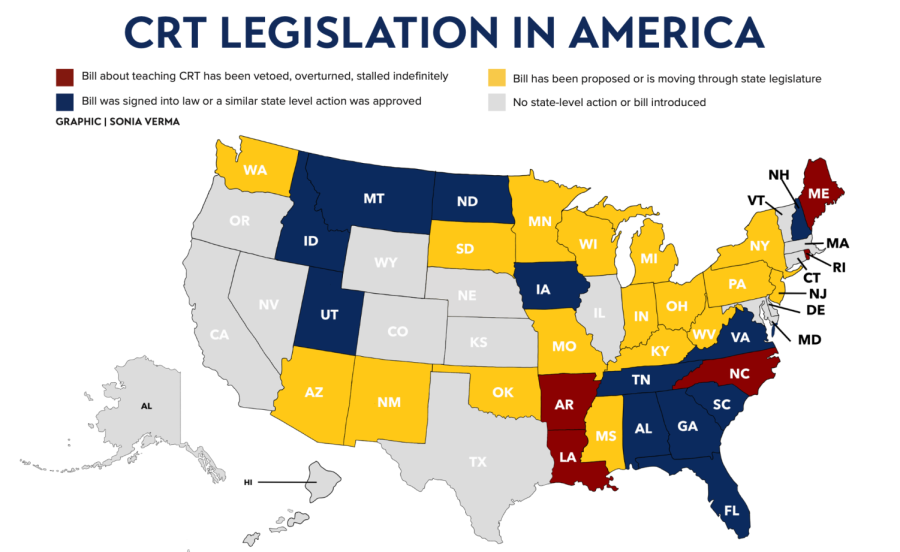 The state of Critical Race Theory legislature varies across the country

In November of 2021, Glenn Youngkin was elected the first Republican governor of Virginia since 2009, beating out the incumbent Democrat Name. Although Youngkin’s campaign focused on the economy, public health and education, the centerpiece of his campaign was his pledge to ban the teaching of Critical Race Theory in Virginia schools.C.

Critical Race Theory is a social movement that stems from the idea that legal and political institutions have been built on a foundation of racism.

An example of the way that institutionalized racism has led to lasting racial inequality is in the impacts of redlining. In the 1930s, government officials drew red lines around areas that had higher concentrations of Black people and labeled them as high financial risks. This prevented Black people from being able to get loans or mortgages from banks, which subsequently prevented Black families from acquiring generational wealth.

The modern echo of redlining exists in single-family zoning, a policy that prevents the construction of more affordable housing in patterns that mimic redlining maps and disadvantages Black people in the same way. Though at face value, single-family zoning is not related to race, historical trends of racism have made it into a policy that fuels racial wealth gaps and inequality. Societal conduct in America is heavily influenced by skin color, and CRT scholars actively work to combat racism within the U.S. by viewing American lifestyle through the lens of race.

CRT has entered the mainstream in recent years as debates on whether or not to include aspects of it in school curriculum has spread across the country, and subsequent criticism of the movement has been widespread. Nine states (Oklahoma, Tennessee, Idaho, New Hampshire, Texas, Iowa, South Carolina, North Dakota and Arizona), have passed legislation that prevents the discussion of the claim that the U.S. is inherently racist, and nearly 20 other states plan to follow suit. This legislation was born out of a largely conservative view that studying American history as one that is inherently racist detracts from students’ pride in being American, causes discrimination against white individuals and creates division in America. According tocritics, CRT in classrooms indoctrinates students into a perspective that causes white people to feel ashamed and guilty about their skin color. Donald Trump has openly denounced CRT, and other Republicans have expressed their concern that it is harming the country.

This type of criticism against CRT, however, is largely based on misinformation and thus should not be given a platform. Most disparagers do not recognize that CRT is not a denouncement of individuals, but rather an attempt to combat racism at its roots by examining its prevalence in society. The media also often fails to correctly portray CRT, further perpetuating its misconceptions. A study conducted by the American Enterprise Institute revealed that most articles about this topic talk more about racism and slavery than CRT’s definition and its intellectual foundations. This incomplete coverage leads to incorrect perceptions about CRT.

Misinformation about CRT leads to unproductive debates about its merits in school board meetings and on political stages. Including anti-racist education in classrooms that focuses on the ways that oppression has been perpetuated throughout American history and continues to be perpetuated today is crucial to teaching students American history accurately. When politicians and the media use CRT as a buzzword to garner votes or clicks, it detracts from the central goal of the movement — to paint an accurate picture of racial inequality throughout history in order to understand how to effectively combat modern racial segregation in legal and political institutions.

At MVHS and in the larger Bay Area, traces of anti-Blackness run rampant within the Asian community. This is often expressed through the desire of immigrant parents to distance themselves from Black communities and align more with white ones. Furthermore, microaggressions such as believing in the stereotype of “Black anger” or suggesting that a Black student only got into college due to affirmative action are frequently perpetuated. Being constantly surrounded by these beliefs results in these opinions being ingrained in individuals and aggravated within society. Yet, trends such as the “Asian Baby Girl” (ABG), in which hoop earrings, gold chains and the usage of AAVE are typical, inadvertently appropriate Black culture. A lack of knowledge about the trend as well as culturally ingrained microaggressions result in racism being entrenched within the Asian community.

It is crucial that we learn what CRT is and what it isn’t, and that we begin to disperse the misconceptions surrounding it. Recognizing and combating the existence of racism within our own communities through productive discourse with parents and by getting educated using anti-racist resources is the first step in reducing anti-Black sentiments in our own societies. On a larger scale, promoting resources which include holistic and accurate coverage of CRT rather than misinformation can help chip away at its misconceptions.

CRT isn’t racist. Racism isn’t a myth. Racial discrimination is a real, pressing problem, and we must work to fix it, and while we like to think that it’s a problem in other states, we can start right in our own backyard.