Teachers explain the philosophy behind listening to music with their students 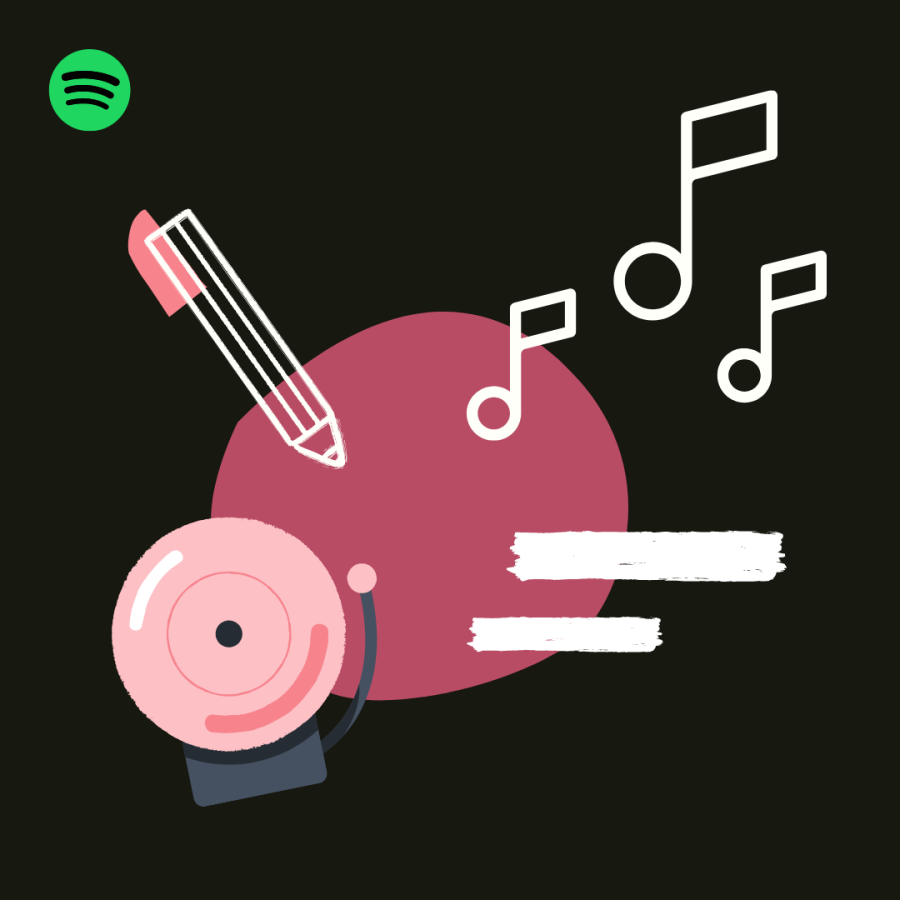 We play during independent work time.

Before class starts, in between class.

As students are coming at the beginning of class, and even after the bell when I’m taking roll.

usic plays an important part in lightening the mood and helping students progress through schoolwork, and Physics and AVID 9 teacher Sushma Bana has made it her mission to embody that environment in her classroom. While substituting for different classes, she chanced upon Art teacher Jay Shelton’s room, and was inspired by the “relaxed atmosphere” she observed with kids in a working attitude yet also at ease while listening to music.

Afterwards, Bana acknowledged that she needed to find the balance between work and comfort in her classes, but was still reluctant to commit to a playlist. After sending out a survey to her students inquiring about the possibility of a student-choice music playlist, she was certain that classroom playlists were the right call after an overwhelming amount of students in favor.

“90% were clear that they would prefer [music], it would help them and I asked them why would you like that and most of that was that it makes us more relaxed,” Bana said. “It takes some of the stress away, we get more done. So I said, ‘Okay, we are not going to play it every day.’ But playing it and I think when music is played then kids are you know they are moving a little more, talking a little more, laughing a little more. So I think it’s just a nice atmosphere in the classroom, so I have continued to do that this year.”

Leadership, Physiology and Biology teacher Jenna Smith also plays music in her classroom, but for different reasons. For Smith, music is a large aspect of her identity, and she celebrates it through her classroom, playing unit-relevant soundtracks during her Physiology periods.

“So for the heart unit, there’s a cardio playlist of nerd heart songs that are just just trying to make a student laugh here and there,” Smith said. “They’re ridiculous, and I know it might not be my favorite song, but you’re dissecting a heart and all of a sudden, ‘This is my heartbeats’ comes on. You can’t help but laugh and smile and when you smile, it’s probably because you’re enjoying something. Associate that with the dissection — Win.”

Similarly to Bana, English teacher Shozo Shimazaki was inspired by a teacher, in his case a science teacher from seventh grade. The teacher’s interest in big band music and friendly personality all fit together to create an inspiration that Shimazaki still remembers four decades later.

Authentic Hawaiian music is Shimazaki’s genre of choice, using radio station Hawaiian Rainbow during class to sooth the mood. Shimazaki discovered the station from his chiropractor, having taken notice of his pleasant demeanor, which appeared to stem from listening to the genre. Shimazaki found authentic Hawaiian music to be difficult to find, and the chiropractor’s recommendation of Hawaiian Rainbow proved to be the perfect fit for the classroom.

“It was difficult to find the right music, but first of all Hawaii. I’ve been there a few times with my family,” Shimazaki said. “And it’s just in, I think in my mind, but I think in many people’s minds, this paradise in your mind, right? And so [students] have a piece of paradise when you walk into class. It’s a nice feeling to have, and then just that sense of sunny ocean waves as well.”

For her curated selection of music, Bana asked for three songs from each student, and put her Teacher Assistants on the job of creating Spotify playlists. Though challenges came with filtering offensive or inappropriate songs, Bana believes that her goal to create a soothing classroom environment was met.

“I think the intention is to help students and make them feel more comfortable, more relaxed,” Bana said. “You know, school is for learning, but it doesn’t have to be miserable, right? It can still be a relaxing journey. And it’s not like oh, it’s an AP class so you cannot play music. I don’t want those tags and those things — we are all learners and we are all in this together. So it definitely helps to build like a community [and] a sense of community.”

Similarly, Smith also asks for song recommendations to add to the class playlist at the beginning of the year, to give ownership over the music played within her classroom, as well as increase her own musical awareness.

Bana finds that one of the benefits of a classroom playlist compared to independent listening is the feeling of deepening the relationships within the community. Although she doesn’t mind students privately listening during independent work time, she shares that listening as a group to a playlist that the class made together during collaborative activities like labs brings a sense of community rarely found during the latter.

“I think that brings out memories in people and the classroom community,” Bana said. “I think it’s, I keep saying that word, but that’s definitely helped build a class, a cohesive community that people support each other, people know about each other a little more. So yeah, if they listen to their own thing, then sure they’re just being a student. But when they listen to music, they become, yes, this student who is also a human being who has a different side to his or her personality that comes out.”

Smith agrees with Bana’s point, but also has a different perspective on the topic, citing a physiological concept of how the brain cannot function and focus on two different things, meaning that music can distract when students believe it is helping. She finds that listening together instead helps sustain focus for everyone more than independent tunes.

“Concerts, people go to concerts to experience music together,” Smith said. “If there’s a song that’s playing and somebody else’s like, jamming into it, or like a little bop here, there are multiple people listening to the same tune resonating — you’re all resonating together. So there is a time and place for students to listen to their own music if they’re feeling it because I know that music can be therapeutic and also just energizing, but there’s something different about listening to something together.”

Bana encourages all teachers to create a classroom playlist, wherever their comfort level is. She believes that once teachers have built a level of trust with students, finishing work can also bring the relaxation and connection that playing music offers to the classroom culture.

“You just have to kind of model that and help kids understand the purpose of [the playlist], and also, I think choice is really important,” Bana said. “It’s not just playing music for the sake of playing music, but [students] should take ownership of the music being played. So I would definitely take the student input in creating [the] playlists, and then modifying them — kids also like that. You know, they feel that, ‘Oh, you know, I like this song.’ But that’s onto that choice and that agency that you give to the students, I think that’s important.”

For Smith, she aims to always focus on two things in her classroom playlists: Lightening the mood with physiology-themed music and empowering students through the difficulties that the pandemic brings to in-person education.

“Nothing that’s … like there is validity to listening to a whiny song of somebody being like, ‘My heart is broken,’ and like you’re there and you just get those feelings out,” Smith said. “There’s benefits to that, but in my classroom, we’re going to start off by listening to something that is going to push us up. And it’s not like we’re listening to whims of, ‘You are strong,’ but the undertone is going to be something that’s positive or a message that will help you to lift yourself up, not just sink into the funk because we’ve been in some funky couple of years. So if we can find some way, with some tune to lift our spirits together. That’s the goal.”