Examining the evolution and influence of humor communicated over the internet 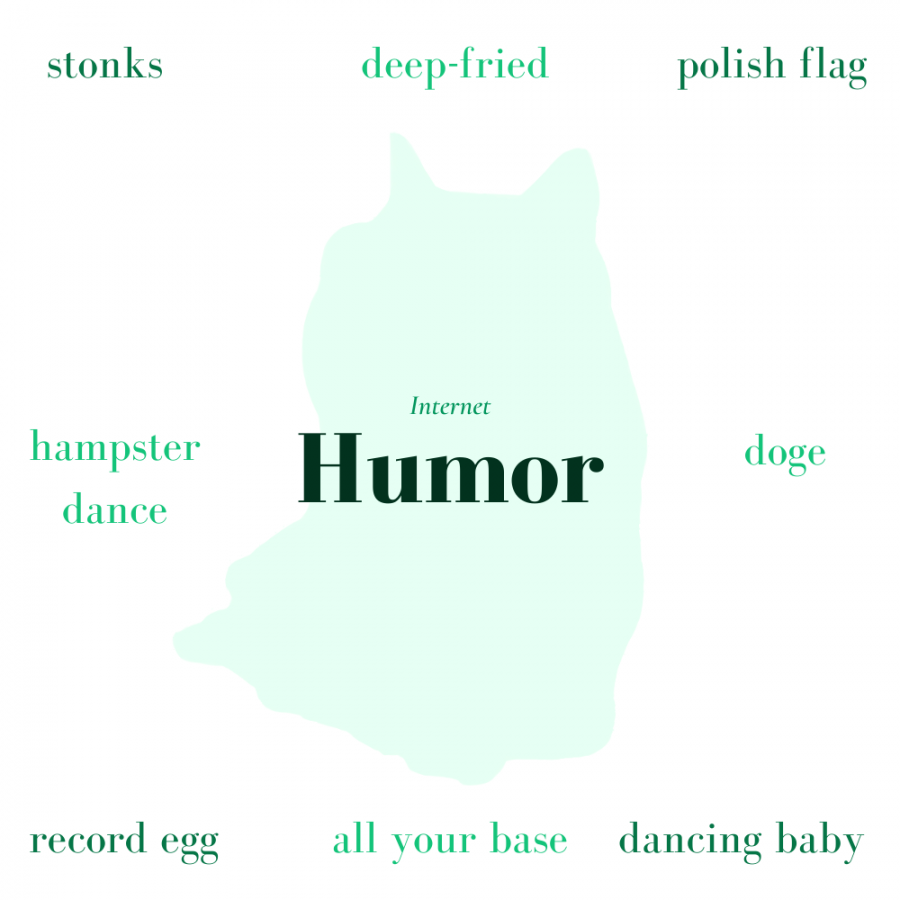 Examining the evolution and influence of humor communicated over the internet

It’s no surprise that many consider our generation’s humor to be quite strange.

Since its popularity boom in the 1990s, the internet has been a space for sharing a wide variety of content, including humor. And with the influence of social media and the ability of a post to go viral within minutes, internet humor is a far more powerful tool than ever before.

The last 3 decades have consisted of influential changes in the way humor is conveyed in the media. From the absurd “Hampsterdance Song” to a popular video of a hyperrealistic dancing baby, the bizarreness of Internet humor is not exclusive to these past few years. Though the term hadn’t been popularized yet, the 90s were full of what we’d now refer to as “memes,” including “Demotivational Posters” and “All your base are belong to us.” The 2000s were the first to experience popular social media — Youtube, Twitter, Facebook and Myspace were all created during this time. Content became much easier to share and circulated faster than ever before, which led to an era of viral content which is still prevalent today.

The 2010s saw the popularization of the modern meme — the major representative of internet humor. Memes began to refer to far more than just random videos on the internet — they became representatives of the time period as a whole. Memes relating to politics and social issues became increasingly popular on social media, often following meme formats and making complex issues easy to understand. While still humorous, these memes served a greater purpose — educating.

The past two years have witnessed a boom in TikTok, a platform that typically showcases videos no more than a minute long that perfectly capture the essence of internet humor. Appealing to the limited attention span of users, these short videos provide the perfect place for memes to thrive. These memes are characterized by several things — oddly distorted images, bass boosted sounds, “unfunny” humor, random emojis, song lyrics and more.

The power of the internet is at its peak and it appears as though it will only continue to grow. It is therefore in the best interest of educators to take advantage of it, a phenomenon that is already occurring in small doses with teachers on Tiktok. Internet humor, as a result of a vast online space home to a myriad of niche communities, has something for everyone. Taking advantage of this diversity of content by bringing it inside the classroom can be used in the classroom to help make learning more engaging. Including memes in lectures and presentations can result in students being more attentive because the content is more relatable and familiar to them, and is therefore more entertaining.

Internet humor and memes are also incredibly powerful tools for companies. Corporations have taken to social media and have humanized themselves using modern humor to encourage people to buy from their brands. Company accounts on TikTok socialize with people in comments sections and often use memes and emojis to make themselves seem more relatable to customers — and it works.

Memes appear to be the future of sharing information, so it’s important for our generation to be aware of them and how they may change over time. Internet humor overall can be incredibly strange to some and the way it has been communicated has changed dramatically over the past 30 years. However, it can be a powerful tool to unite people, and should be taken advantage of as such.