Giving credit where it’s due

Examining the linguistic appropriation of AAVE in modern rhetoric 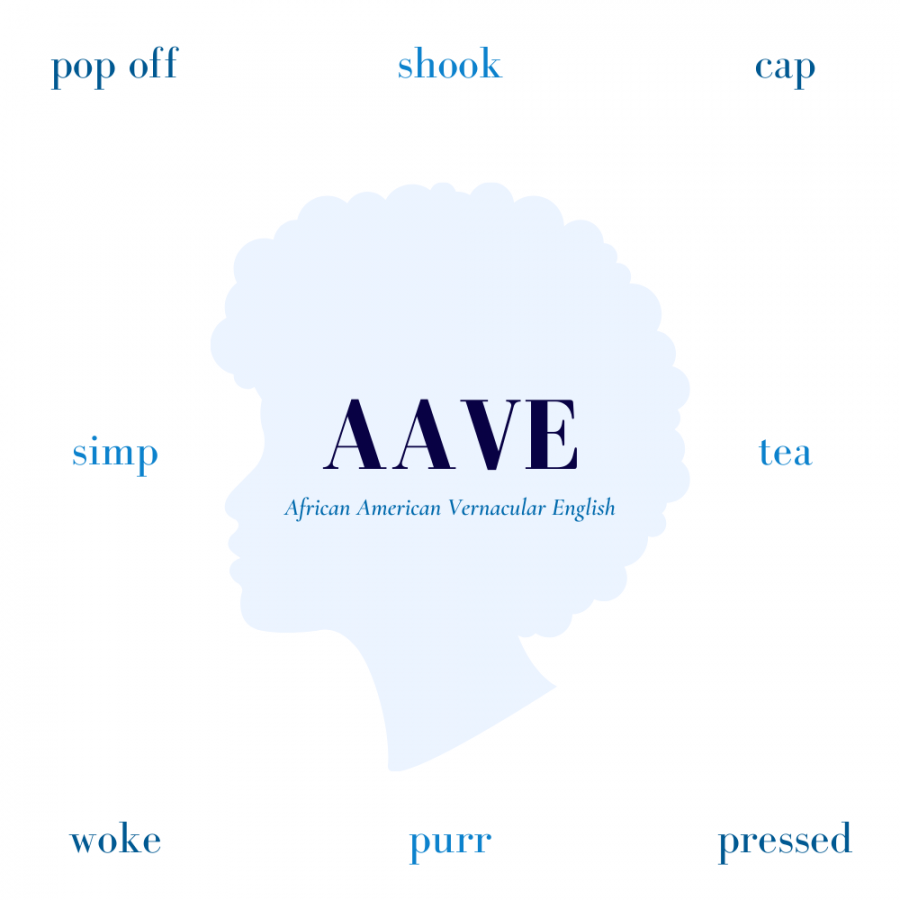 “That was hella cool!”

“Damn, that party was lit.”

“You really popped off.”

These terms have become part of our vocabularies, seeping into our texting lingo and daily conversations. Other phrases like “miss girl,” “no cap” and “period” have also seen an uptick in use on social media.

Despite our labeling of these words as “internet slang”, much of this rhetoric is actually derived from African American Vernacular English (AAVE), an isolect of English used primarily by the Black community.

When the British colonized America in the 17th century, many Black individuals who were forced into slavery developed dialects similar to those of Southern white settlers. With the additional influence of African languages, including creole varieties, the language evolved into what is now recognized as modern-day AAVE.

In recent years, AAVE has become prevalent on the internet, largely due to the popularization of rap and hip-hop culture. Since these genres are rooted in the African American community, many Black artists use AAVE in their songs. And as rap and hip-hop have become mainstream in recent years, more non-Black people are exposed to this language and begin to use AAVE in their daily lives.

With AAVE’s widespread usage on the internet, the isolect’s linguistic appropriation has had numerous detriments, including the erasure of AAVE’s cultural significance and the struggles of Black individuals who use it.

AAVE has a history of being treated as inferior to “standard” English, which leads many Black individuals to code-switch, or adjust their style of speech and behavior based on the race of the people they’re interacting with. In a research study on code-switching, several Black high school students expressed that they felt compelled to speak in “standard” English and mask other aspects of their culture to be seen as educated and responsible by their non-Black peers and teachers.

Constant code-switching has many negative effects — it can cause higher rates of fatigue and burnout and can lead to accusations of being white-washed. This is one of the reasons the liberal usage of AAVE on the internet poses a problem — while many Black individuals have felt the consequences of repeatedly code-switching and been unable to maintain their culture if they want to be treated with respect, non-Black people don’t face the same backlash for using the isolect and partake in Black culture without comprehending their struggles.

There have been other instances where the usage of AAVE has caused Black people to be taken less seriously, as seen during the trial for Trayvon Martin’s murder. When Martin, age 17, was shot by George Zimmerman, he had been on the phone with his friend Rachel Jeantel. Jeantel, being a key witness in the case, testified in court — only for her account to be completely discounted.

Because Jenteal spoke in AAVE when recounting her call with Martin, the jurors claimed that it was difficult to understand her diction and even asserted that some of the phrases she used were offensive. The jury’s dismissal of Jeantal’s testimony on the basis of her diction emphasized how Black voices are undermined simply for using AAVE and was one reason that eventually led to Zimmerman’s acquittal in the case.

In addition to the historic prejudice against AAVE, the recent popularization of the isolect has diminished its cultural significance, as other groups and communities have co-opted AAVE as their own culture.

For example, phrases like “yass queen” and “slay” are considered by many as gay slang, as they were popularized by LGBTQ+ media like RuPaul’s Drag Race and Queer Eye. However, these phrases are part of AAVE and have their roots in Black ballroom culture. Non-Black individuals’ overwriting of these terms as their own fails to acknowledge their history and meaning to the Black community.

There have also been numerous social media trends formed around linguistic appropriation — in this popular TikTok audio, the person featured in the video clearly misuses AAVE by saying several terms that have no coherent meaning when put together in that manner. As a result of such linguistic appropriation, AAVE phrases have started to lose their original meanings and continue to be used incorrectly by internet users.

A majority of the MVHS population is non-Black, but many of us use AAVE without a second thought — simply regarding it as slang we picked up from the internet. However, our “internet slang” is founded in Black culture, and it’s disrespectful to not give credit where it’s due.

Though it is unlikely that non-Black people will stop using AAVE completely, we must take more active efforts to listen to Black voices and educate ourselves on the proper usage and history of AAVE in order to honor its significance within the Black community.