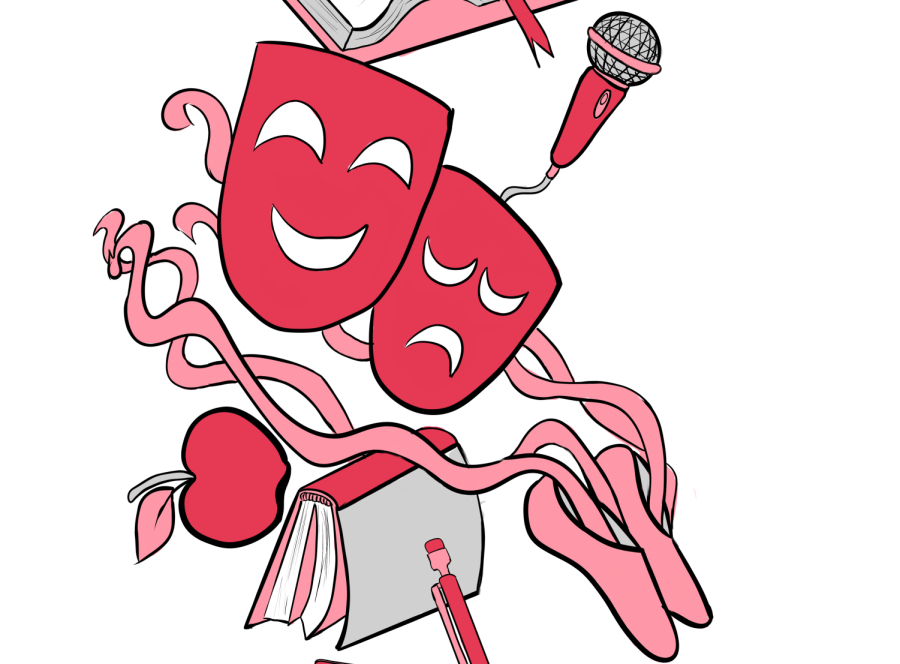 Different aspects of the humanities.

Despite pursuing English and Russian literature, performing arts has always been a constant for English and Drama teacher Hannah Gould. As a child, she dreamed of becoming an actress.

“I loved my first dance recital,” Gould said. “I was three and I loved being on stage so much. It was this feeling like nothing else –– it was like its own pull, its own motivation. It was just so obvious that that was the most important thing [to me].”

In high school, Gould considered various possible careers including teaching, theatre and foreign language. When she went to college in New York City, she immersed herself in Russian Literature, in which she pursued a Ph.D., with the goal of becoming a professor For Gould, learning a foreign language was a way of expressing herself and connecting with others. However, after experiencing extensive research papers, Gould decided to reevaluate her career path. All the while, Gould was also interested in theatre, which helped her define her career as the head of MV Drama.

Similarly, Guidance Counselor Clay Stiver intended to major in physics in college but ultimately switched to psychology, where he eventually began working in education and realized how much he loved working with people. Stiver grew up in the Bay Area and has spent 13 years of his career in the Fremont Union High School District.

FUHSD offers a high mid-career salary compared to other school districts, however, the average salary for a teacher or any career path related to the humanities, is not quite as much as a job in a field of medicine or engineering.

“I have a pretty good salary since we’re at one of the highest-paying districts in the country,” Gould said. “It’s really good money, but for the amount of work I do, if you divide the time by the hours that I get –– it’s pretty sad. Most people who work as hard as I do in tech or in other STEM fields make a lot more already.”

Stiver also believes there’s a cultural aspect of parents urging their children to work in jobs in STEM with reputations of being well-paying and secure. Sophomore Pranati Kotamraju faced a similar issue when she first expressed interest in potentially studying literature in college.

“Everyone in my family is an engineer. My mom’s [an engineer]. My dad’s an engineer. My family is basically made up of engineers and doctors,” Kotamraju said. “So I know I should expect [the push to go into a STEM field] from them, especially since that path worked out for them so well. They feel like it would be easier for me if I pursued that path as well. But I’m not them.”

When she was 8 years old, Kotmanraju took a robotics class. Her parents pushed her towards STEM-related subjects such as math and science, but she found herself uninterested in those fields. Instead, because she liked to read and write, Kotmanraju began exploring the world of literature.

To her, the humanities are unfairly simplified as careers for people who aren’t good at science or math and aren’t willing to put in the work to pursue jobs relating to these subjects. Instead, Kotmanraju believes that there’s a lot of work that goes into one’s art.

Although her parents were disappointed that she didn’t show interest in math and science subjects, they were still supportive of her interests. However, they also expressed concern about the financial limitation of a job in the literature field.

In response, Kotmanraju said that “as long as [she has] food, water [and] clothes,” and for something she’s passionate about, “[she] can manage.”

Stiver cites the pursuit of a career with reputability and stability being driving factors for many students to get involved in a STEM field, despite individual passions.

“Sometimes it’s cultural or family-driven, where families want to talk about their son or daughter and how well they’re doing working at Google as a computer scientist or something like that,” Stiver said. “I do think that a lot of that [prestige] is sometimes a motivation for not just students but for families too, and I think sometimes, a lot of our students feel some kind of pressure from family to go towards a certain career.”

However, Stiver acknowledges that if someone can “suck it up and get through the day,” there’s “nothing wrong” with wanting to “make good money to provide for their families or do those fun things they want to do.”

For Stiver, it’s not about the money — he does his job because he’s passionate about it. Similarly, Kotmanraju and Gould say that they’ve chosen their paths because they are personally fulfilled by their choice in career. For Gould, being the head of MV Drama provides her the societal benefits of teaching the next generation and an occupation that she feels is keeping her life progressing. Unlike many of her friends in tech jobs, according to Gould, her job enables her to constantly experience and learn new things.

“If everybody just worked for a tech company, who’s going to teach our children? Who’s going to make us laugh and cry?” Gould said. “I feel like my job enables me to live the way that I live my life as I’m always learning and growing and trying new things and following my passions and interests. I feel like I haven’t stagnated and just become boring and sedentary. Because that feels kind of like death to me.”