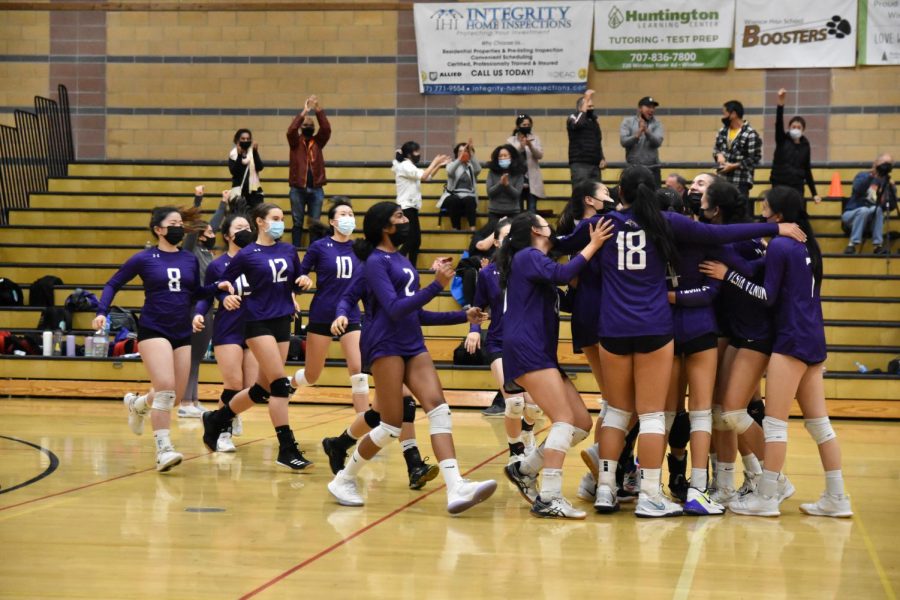 The team celebrates after defeating Windsor High School 3-1 in the first round of NorCal playoffs, during their first time ever in the tournament. Senior and captain Lia Vorthmann made the final kill of the match, giving the Matadors the win.

After making it to the CCS finals for the first time in 23 years, the Varsity Girls Volleyball team lost 3-1 to Menlo-Atherton High School on Nov. 6. The game followed a unique run for the team, after winning unexpectedly against Mountain View High School in the semifinals 3-1 and undergoing a coaching change midway into the tournament.

Junior Sydney Su, a varsity setter since freshman year, states that going into the season, she was unsure of how the team would perform due to the fact that many seniors just graduated and COVID restrictions had caused the previous playoffs to be cancelled.

However, due to Ezatagha being away after regular league play, Boys Volleyball Coach Paul Chiu stepped in to guide the team. The change in coaching initially added a little uncertainty, according to junior Krupa Shanware, but Su felt assured by Chiu’s experience coaching the Boys Volleyball team.

According to senior and captain Lia Vorthmann, everyone “took a liking” to Chiu pretty early into CCS, which contributed to the overall team dynamic. She believes his coaching style also pushed the team to do better.

“Probably the biggest difference between him and our other coach Nicki is that he kind of lets us coach ourselves during timeouts, like we just talked amongst ourselves,” Vorthmann said. “So I think that really helped us build confidence, I’d say, because everybody knew and trusted each other. It was just easier to play.”

Vorthmann and Su agree that a highlight of the season was the team’s CCS semifinal match against Mountain View High School. The team had entered the match as the underdogs, due to them losing to Mountain View twice previously during the regular season 3-0 and 3-1, respectively.

“When we beat Mountain View in the CCS semifinals as a team, that was the best we’ve ever played,” Vorthmann said. “The energy was just really good. The moment we won, everybody rushed in and were yelling and jumping, and then the Mountain View coach ended up walking over to us and congratulating us, telling us we played really well.”

Shanware attributes the high energy on the court to the surprising amount of supporters in the stands in the semifinal game. While she usually had only seen close friends and family at prior games, she hadn’t “ever seen that many people come out to support Monta Vista volleyball.” Shanware also states that another major factor that allowed the team to succeed despite their switch in coaches was the relationships the girls had forged with each other early in the season.

“It’s just the bond that we all have with each other,” Shanware said. “I think the biggest part of our success is just being so good at working with each other. Having that little piece click in, that worked so well for us.”

Looking to future seasons, Shanware hopes to experience rising through CCS again and hopes the team dynamic will remain strong even without the presence of the graduating seniors.

“I know all of [the graduating seniors] so well, and I’ve played with them for so long now that it’s definitely gonna feel different,” Shanware said. “Of course, we have our captains, our leadership comes from that senior class, so it’s going to be interesting to see who will step up and fill that. It’s been a great season.”