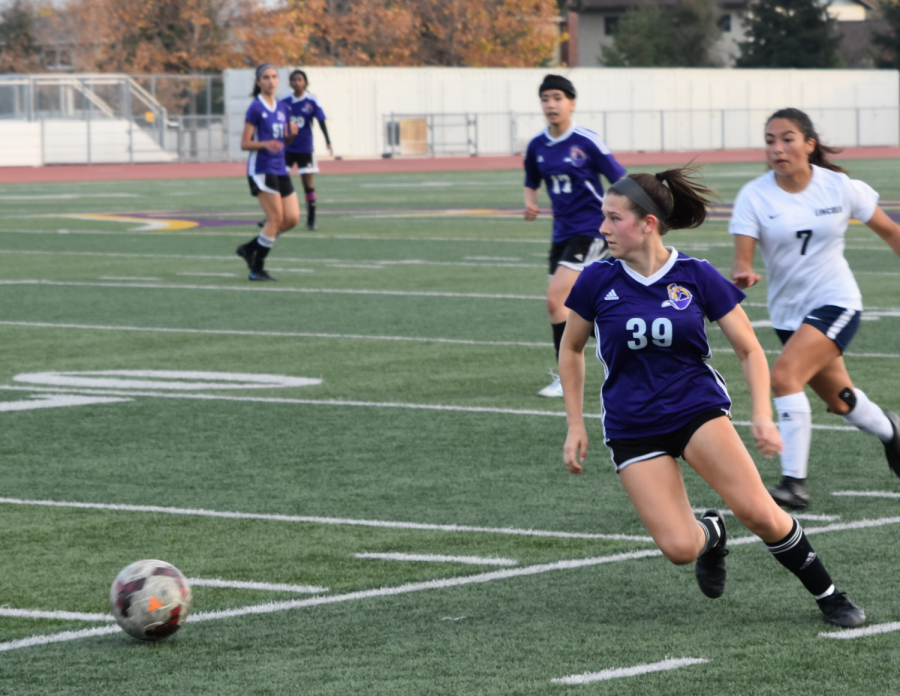 Freshman Maya Gallo sprints towards the ball as she gauges the field to see if any teammates are open.

Although the Varsity Girls Soccer team played offensively for most of its game against Lincoln High School, it lost 8-2 in its third preseason game on Thursday, Dec. 2.

Sophomore Niku Sederat believes that the team was able to communicate more effectively during this game compared to its last one against Gunn High School on Nov. 29, but the team is “adjusting a little bit too slowly” to playing together. Freshman Maya Gallo agrees — as a new player on the team, she describes how she is unfamiliar with her teammates’ playing styles.

By actively communicating throughout the game, the team was able to stay in its offensive zone, or past the 50-yard-line, for the majority of the game, yet struggled with being aggressive when they lost the ball to their opponents. This allowed for LHS to quickly score when MVHS lost possession.

By the end of the first half, LHS had scored five goals while MVHS only had one, which had been scored by junior Ishita Pesati. Sederat believes that LHS had a strong lead during the first half due to MVHS’s lack of intensity. This led the team to become more aggressive and physical during the second half, allowing junior Justine Garcia to score another goal for MVHS.

Sederat accredits the team’s lack of mental preparation for the game to finals’ week being around the corner less than two weeks away.

“We [were] thinking about two things at the same time, so just being more focused on the game [would have helped],” Sederat said. “We are definitely improving and I am really excited to play more games and work with this team and get to the level that I know that we can get to.”