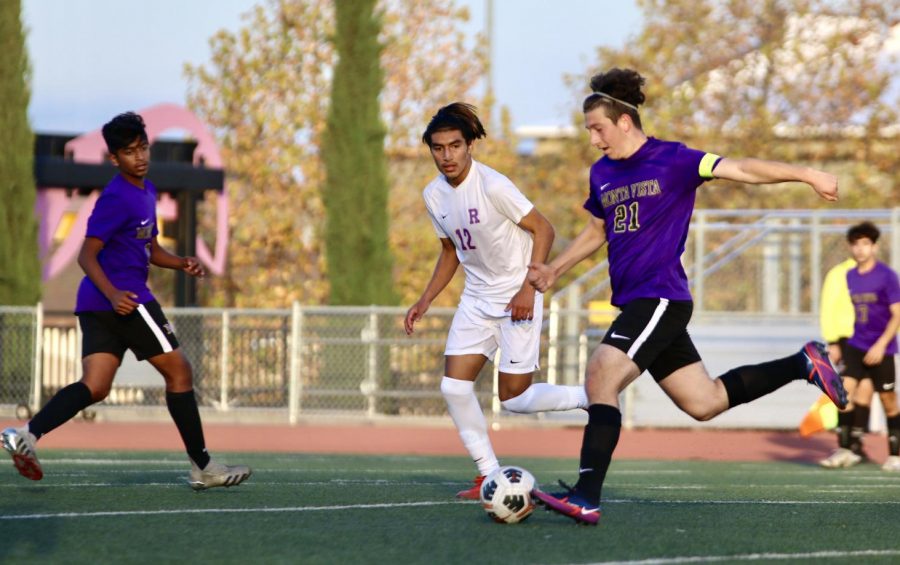 Senior and captain Mikey Tzankov dribbles the ball past an opponent from ARHS.

The only goal scored during Varsity Boys Soccer’s first preseason game on Tuesday, Nov. 23, resulted in the 1-0 win against Archbishop Riordan High School. From MVHS’s side of the field, senior and captain Shervin Jalilvand shot a free-kick to senior and captain Mikey Tzankov, who then passed it to junior Abhiram Tatavarty who scored the winning goal.

The celebratory chest-bumping and cheering that followed Tatavarty’s goal set the tone for the rest of the game, as the Matadors maintained “high energy” into the rest of the second half. Senior and captain Edin Kraja believes the goal will be “one of the biggest moments even when [they’re] looking back on the season in the future.”

According to Tzankov, the sequence of passes, beginning with Jalilvand’s free-kick and ending with the goal, highlighted their chemistry as a team. Kraja notes that this same dynamic between the players was evident throughout the entirety of the game, stating that the team showed strong communication overall. Kraja also attributes the team’s successful zonal defending and “organized pressing” up the field to their consistent practice and trust in one another.

“I just love the unity people had on the field,” Kraja said. “When people would get hurt, we would look out for one another. There was just a lot more talking and communication, which was lacking in the last two games.”

Kraja believes that the final score was not reflective of the number of scoring opportunities — a big weakness he observed was the team not taking advantage of these opportunities during the match. Nevertheless, Kraja and Jalilvand anticipate a successful rest of the season and are hopeful that the Matadors will become state champions.

“We can do more this year,” Jalilvand said. “We’re a talented squad. And [this season], we’re gonna be one of the best teams in the league.”