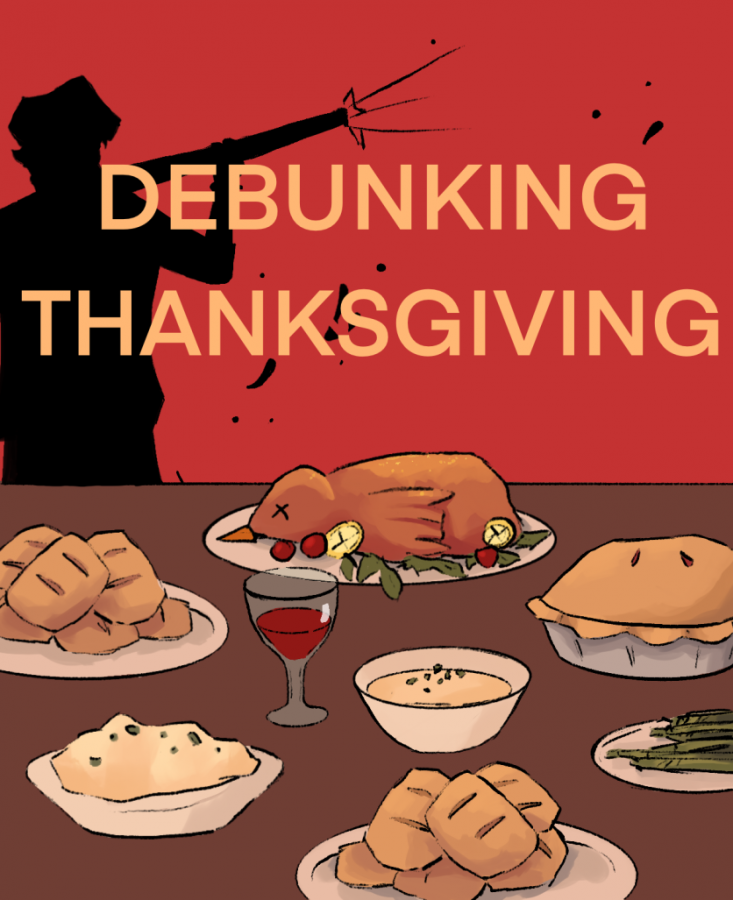 In fifth grade, we cut feathers from colored cardstock and glued them to paper headbands. We played as tribesmen and explorers – innocent, awed by the tales of friendship and gratitude we were told of early pioneers and settlers in the New World.

The Western-based worldview known as Eurocentrism is rooted in every facet of our education system, especially history. Looking back on the dubious interpretation of Thanksgiving history we were taught in elementary school, its influence on our education seems glaring.

To sustain a Eurocentric narrative, white people often miscredit achievements, demonize cultures, and rewrite stories to portray themselves and their endeavors in a better light. For instance, though the tales of Chistopher Columbus are widespread, few of us know about Viking Leif Erikson’s arrival in the New World because Erikson didn’t spark mass colonization. We know Native American interpreter Squanto helped the Pilgrims survive winter in Plymouth, but his prior enslavement by English explorers is barely acknowledged. Time and time again, other civilizations only become relevant when their paths interweave with European expansion.

The erasure of Native American history is a lasting victim of this phenomenon, and this problem is evident in how the origins of Thanksgiving are taught and portrayed in children’s books, school curriculum and the professional media.

In elementary school, the first Thanksgiving is often portrayed as a story of friendship and cooperation, entailing a celebratory feast shared by Pilgrims from the Mayflower and their Native American neighbors after a successful corn harvest. However, this is far from the much more complex and far less moral reality. Not only does it ignore the long pre-existing tradition of of giving thanks at autumn harvest feasts that had already existed in Wampanoag culture, but it also erases the following decades of conflict between Natives and settlers that culminated in genocide.

We were instead taught the sugarcoated narrative of Pilgrim-Native friendship in our fifth grade social studies classes, encouraged to dress up as colonizers and instructed to make paper headbands in imitation (mockery, really) of Native headdresses.

While some believe censoring brutality is necessary to shield impressionable children, our education system has not only avoided the truth – it has disregarded Indigenous history by spreading falsehoods and normalizing cultural appropriation. U.S. History is a required course to graduate high school in 41 states, and World History in only 24, according to statistics from the Education Commission of the States. This Eurocentric approach to history perpetuates ignorance towards other cultures in a country that is still diversifying.

Recent advancements have been invaluable in furthering awareness of Indigenous history and culture. MVHS provides advisory lessons on Thanksgiving, is in the process of developing an Ethnic Studies course and often recognizes important Indigenous historical figures over announcements in honor of National Native American Heritage Month. However, these efforts are only putting a bandage on the more pervasive issue of Eurocentrism. To dismantle this traditional Western-based narrative, we must first address the acute lack of Indigenous history education starting from early elementary school.

Native American history is complex. It didn’t start or end with conquest, and it should be taught that way – as the full story – rather than a brief overview of their culture or an oversimplified rendition of their role in colonial history. Omitting the dark side to events like Thanksgiving blots out the brutality of colonizers, but it fails to address it. Implementing more primary sources is an engaging way to eliminate textbook bias and allow students to develop their own interpretations.

The wrongs of history should stay in the past, but understanding them is the first step to unravelling our current world. It’s time we start trying.

Brush up on your Thanksgiving history with this slideshow from Advisory in 2020.