Examining the recent rise in gun violence and its impact on MV students, staff and parents 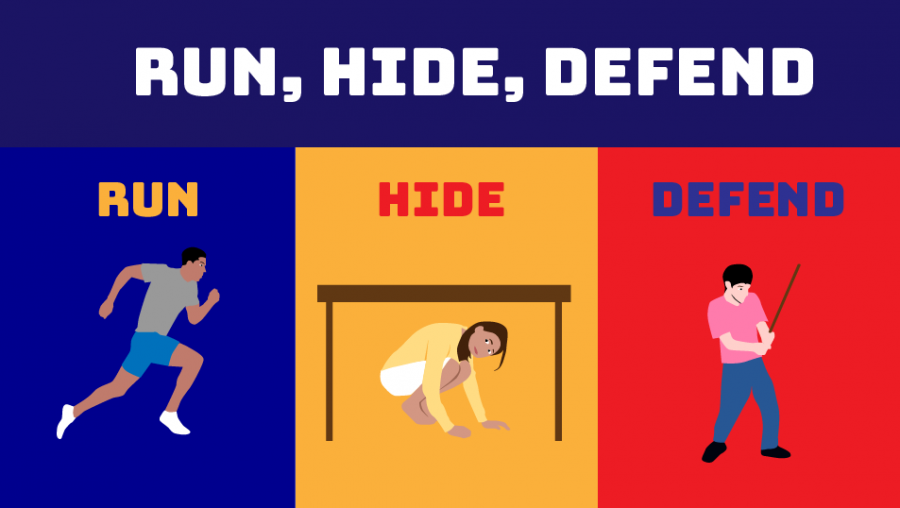 To ensure safety for students and staff during gun violence incidents, run, hide, and defend procedures should be implemented. Graphic by Angela Zhang

Reports of a student found in possession of a gun at Homestead High School inspired fear within the Fremont Union High School District community on Sept. 14, 2021. HHS senior Anna Zhou explained that the incident put fellow students “a little more on edge” because it brought the reality of gun violence closer to home.

For millions of students across America, the threat of gun violence often looms over day-to-day activities. In fact, the Everytown Research & Policy group found that around 3 million children in the United States are exposed to shootings each year, with more than 3,000 of them shot and killed. In September alone, 55 school shootings were reported nationwide, more than double the number of shootings ever to be reported that month in previous years.

“I feel like I’ve always had that concern like every time I walk on campus I see a glass window I’m like, that’s dangerous,” Junior Amy Hu said. “It’s not something that I’m always stressed about, but it always comes up here and there.”

With the increase in school violence, Sowjanya Signamsetty, the mother of MVHS sophomore Medha Singamsetty, expressed the complex emotions that hit her due to the uncertainty about violent occurrences potentially occurring at school.

“The children and teens in this country experience really high rates of gun deaths and injuries,” Singamsetty said. “This is a really threatening situation for everyone. As a parent, I’m really worried if this would make a huge impact on my kid’s psychological and mental well-being.”

In light of events such as the HHS gun incident and the threat of school shooters nationally, Hu believes that now is the time for action.

“I think there should be more policies and regulations regarding ownership of guns and the use of guns,” Hu said. “I know in other countries like Germany you have to get a license and in a safety compartment, whereas in America … you could just give a gun as a gift and that’s normalized and I don’t think that’s OK.”

While the annual active shooter drills may serve as a means to assuage fear, School Psychologist Annie Roe believes that having Advisory lessons and regulating conversations about this issue is a strong alternative.

​​”I hope that there is some education around that piece of [gun violence] advocacy,” Roe said. “If you see something, say something. Maybe a lesson around the people you can contact that you can go to and these are ways that you can try to intervene.”