Having close relationships with grandparents is a privilege 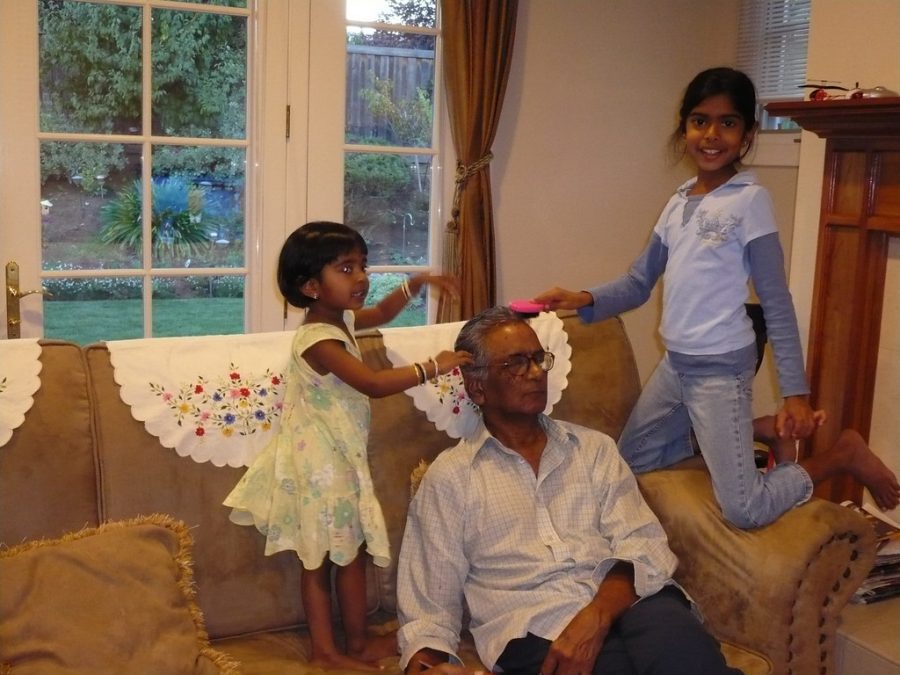 My sister, Samhitha, and I stand on the sofa brushing and playing with our maternal grandpa's hair.

I snatched all the cards that were laying on the bed and with my small, three-year-old fists, I hurled them into the air. My eyes followed the cards as they fluttered to the ground.

My sister glared at me as I watched her and my grandfather with a look of jealousy.

“Geethi?!” my grandma called out.

I immediately turned to her and started whining,“Akka [my older sister] and Thatha [my grandpa] won’t let me play Clearance with them!”

My grandma sat down next to me and handed me two jokers and kept two. We both put a card down, then picked it back up in a cycle that repeated countless times.

Though I knew that I wasn’t exactly playing cards, a smile spread across my face. I was happy — I felt included at that moment and that was enough for me.

My parents never met their grandparents because they had passed away by the time my parents were born. As a result, my mom felt that spending time with our grandparents was extremely valuable because they are a whole support system, almost like a second set of wiser parents. Although all four of my grandparents lived in India, my family visited them every year, no matter the cost.

My maternal grandpa would buy tubs of chocolate ice cream and orange soda, while my grandma stocked up on mosquito repellent, knowing that the blood hungry mosquitos loved to bite me and my sister.

My dad’s parents would make our favorite foods — a pleasant and flavorful aroma of spices greeted us each time we visited their apartment. My head would peep over the kitchen and my eyes would gape at the multiple vessels of rice dishes, desserts like Gulab Jamun and a huge skillet of Indian flatbreads. They would also queue up our favorite cartoons, making sure they were either in English or Telugu, our native language.

It was the week before Halloween and 4-year-old me stuck my hand into the pumpkin my sister, grandma and I were carving. Reaching for a fistful of pumpkin seeds, a smile appeared on my face as I said, “Look, Ammamma!” and held up a handful of slimy pumpkin guts.

My grandma made the “wow” face and said, “Good job, Geethamma.”

My sister, grandma and I all carefully carved the pumpkin and took the seeds out to roast and eat. I sat on top of the island and munched away at the seeds, spilling crumbs everywhere, as my sister scolded me, but I didn’t care. That moment is so vivid to me, almost dream-like because I felt so blissful, happy and loved.  While I have little to no memory of my life before I was five, this memory is still ingrained in my mind to this day.

As a child, I played with the kids on my street and visited their houses regularly. Oftentimes, their grandparents would be there to cook for them, play with them and take them places. My neighborhood friends Dani and Dineo would have their Lola visit weekly to cook traditional Filipino food and play dress-up. Though I wasn’t particularly jealous, I sometimes felt disappointed that I didn’t have any extended family in the U.S.

But by fifth grade, I started to understand that a lot of my peers had never even met their grandparents. While I would excitedly share about seeing my grandparents over the summer, my friends would say, “That’s so cool! I’ve never met my grandparents. They weren’t alive when I was born.”

Despite all of the wonderful memories I was able to create with my grandparents, things began to sour in 2018 and I began to understand the phrase “take the good with the bad.”

In 6th grade, my mom picked me up from Kennedy on a sunny, late spring day. I lugged open the door and plopped down into the seat, but my mom didn’t say anything. That was when I found out my dad’s father had cancer. As a sixth-grader, I didn’t quite know what stage four colon cancer was but I did know that it was bad. That same summer, my family went to India to spend time with my dad’s parents, knowing it may be our last summer together.

Six months after our trip to India, my grandpa had passed away after a long and grueling battle. Soon after my grandpa’s death, feeling as if I had just turned my head for one minute, I watched as my mom’s dad started to slowly deteriorate physically and mentally. Since my grandma and grandpa lived so far away, phone calls were my only way of communicating with them. I would call them weekly and try to talk to my grandpa even when he started to forget who I was.

Having grandparents who are present in your life comes with the burden of understanding death and feeling grief or pain that you wouldn’t have otherwise had to if you never met them. But looking back on the time I spent with my grandparents, mourning their deaths is a small price to pay in return for their affection and fond memories. Without them, I wouldn’t have learned many valuable life lessons like how your actions will always catch up to you — karma! — proving the importance of making respectable, honest choices.

While many don’t see having grandparents around as a privilege, there is always going to be someone out there who isn’t as lucky as you and might have had to grow up without grandparents, aunts, cousins, a mom, a dad or a sibling. For being able to grow up knowing and creating memories with my extended family I feel extremely lucky. Ultimately the “bad” memories along with the good ones have only made me feel more appreciative of what I have. Thank you Ammamma, Nannamma, and Thathas!